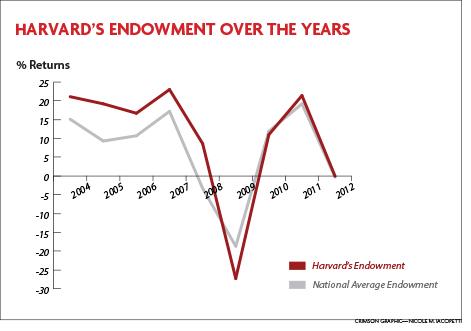 Harvard’s endowment, which has been following the trend for the national average endowment, has dropped in recent years. Its endowment dropped .05 percent in the last fiscal year.
By Nikita Kansra and Samuel Y. Weinstock, Crimson Staff Writers

Harvard’s endowment returns beat the national average for American colleges and universities during the 2012 fiscal year, according to a study released Friday by the National Association of College and University Business Officers and the Commonfund Institute.

Harvard’s returns dropped .05 percent during the last fiscal year, which ended on June 30, 2012, but were still higher than the nationwide average. The endowments of 831 colleges and universities, including Harvard, experienced average returns of -.3 percent in the 2012 fiscal year, according to the study.

That figure represents a significant decrease from the 2011 fiscal year when educational endowments saw returns of 19.2 percent. That year, Harvard’s endowment grew by 21.4 percent.

“While investment performance over the last twelve months was well below long-term averages, we nevertheless found good investment opportunities through both internal and external management that we believe will sow the seeds for future growth,” Harvard Management Company President and CEO Jane L. Mendillo said in a press release when Harvard released its 2012 endowment figures.

Although Harvard’s losses in 2012 beat the national average, they were less consistent with the average returns on larger endowments. According to the study, schools with endowments valuing $1 billion or more experienced average returns of .8 percent.

In terms of total market value, which takes into account investment returns along with deposits and withdrawals, Harvard’s endowment dropped 4.1 percent but still remained by far the largest in the world at $30.7 billion. Yale University’s endowment, which at $19.3 billion is the second largest in the country, held steady in the 2012 fiscal year with a market value loss of only .1 percent.

Harvard’s below-average returns last year can be explained in part by the particularly poor performance of international equities, in which Harvard heavily invests. Foreign investments experienced an 11.8 percent loss, according to the NACUBO-Commonfund study, which also broke down endowment returns by asset class.

NACUBO and the Commonfund Institute both conduct research on higher education and release a joint report on university endowments annually.