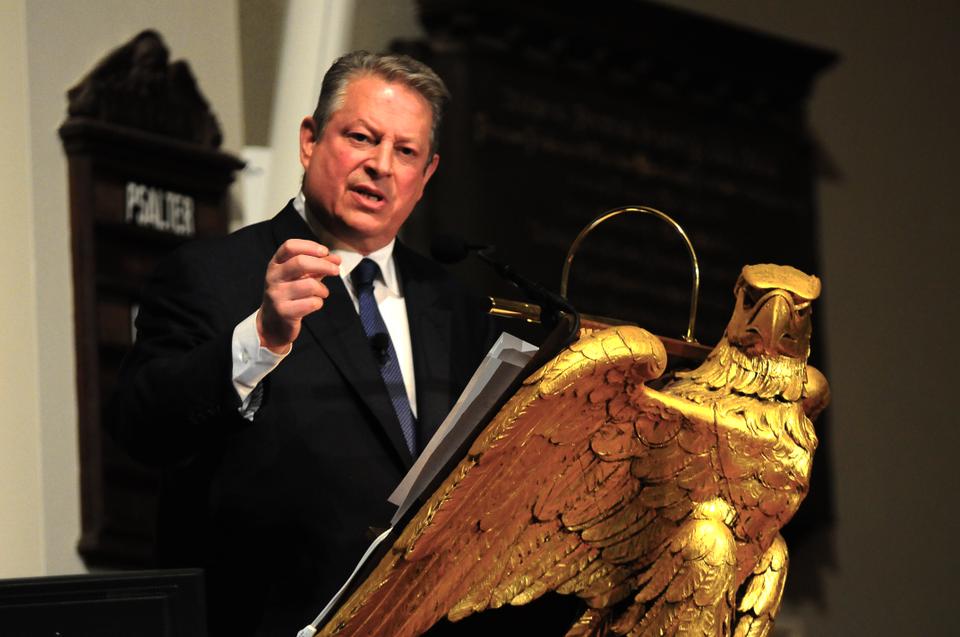 Former Vice President and Nobel Laureate, Al Gore ‘69, speaks at Memorial Church Wednesday night for The Paul R. Epstein Memorial Lecture. The talk was sponsored by the Center for Health and the Global Environment at the Harvard School of Public Health.
By Fatima Mirza and Rachel J. Sapire, Crimson Staff Writers

Vice President and Nobel Laureate Al Gore ’69 praised recent efforts of Harvard students involved in environment and divestment campaigns during a speech focused on the health hazards of global warming which he gave in Memorial Church on Wednesday night.

Hundreds of students and community members lined the Yard in hopes of securing a spot in Memorial Church to hear the man introduced as “in truth, the elected president by America.”

Eric S. Chivian ’64, director of the Center for Health and Global Environment at Harvard Medical School, turned the stage over to Gore, whose talk was entitled “Healthy Planet, Healthy People.” The talk was sponsored by CHGE as part of the recently launched Paul R. Epstein Memorial Lecture Series.

During his talk, Gore lauded Harvard’s progress in becoming a more sustainable institution.

“One of my previous visits here with President Faust was to witness the launching of the Harvard Office of Sustainability,” said Gore. “And now some time has passed and we see extremely impressive results, not least of which is the incredible activism and engagement by students who have contributed to the progress the University has been able to make.”

Gore stated that consequences of global warming are compelling and devastating, but said that he believes in humanity’s ability to effect positive change.

“The dangers we face are almost unimaginably dire,” Gore said. “My hope is based on the history of our experience as a species.”

Gore said that the warming climate has destructive effects on human health. He noted examples of climate change that have influenced insect behavior and, therefore, the spread of diseases such as West Nile virus.

According to Gore, recent health dangers were anticipated by Epstein, a leader in the field of climate change at the Harvard School of Public Health.

“Everything that I’ve read to you about these recent findings was anticipated by Paul Epstein,” said Gore. “He wrote seminal papers 12 years ago. He saw the pattern very carefully and he was right. We all have a great debt to him.”

Gore voiced his disappointment in the current political system and the lack of discourse related to climate change in the recent presidential election.

However, he expressed hope in President Barack Obama’s ability to combat the rising temperature trends.

“I am optimistic today also because in his inspiring inaugural address, President Obama made the climate crisis the very first challenge he discussed and spent more words on it than any other. I was thrilled by that.”

The idea of the night was change. Gore continually stressed the urgency of the current situation, appealing to the audience with analogies.

—Staff writer Fatima Mirza can be reached at fmirza@college.harvard.edu. Follow her at @fatimanmirza.