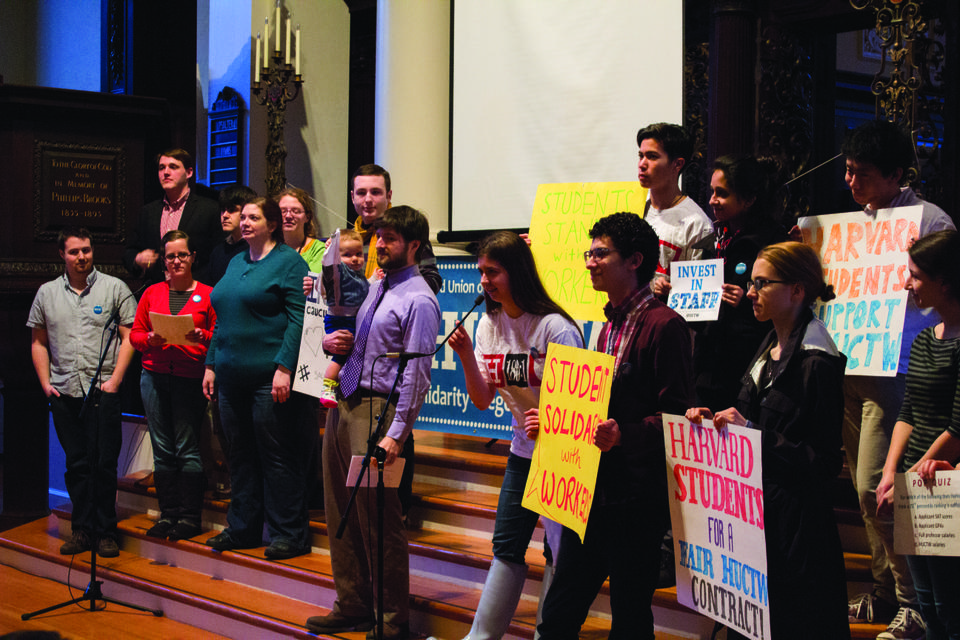 In the first union rally to ever take place in Memorial Church, the Harvard Union of Clerical and Technical Workers gathered with supporters on Thursday afternoon to bring attention to its ongoing contract negotiations.

Harvard and HUCTW, which represents more than 4,600 of Harvard’s non-faculty staff, have been in contract negotiations since the old contract between the two sides expired July 1 of last year.

HUCTW Director Bill Jaeger estimated that 750 people were in attendance at Thursday’s rally. At the gathering, he called for partnership between HUCTW and the University, saying that while the two parties have had a strong relationship since the union’s conception 25 years ago, he believes recently the University has been less willing to compromise.

“True partnership has to be a two-way street,” Jaeger said. “and it’s time for us to cross over to the sunny side of the street for a little while.”

A University spokesperson wrote in an emailed statement that Harvard remains committed to resolving the issues through the negotiation process.

“We have had positive and constructive discussions as part of the mediation process and will continue to work toward an agreement that is fair to employees represented by the HUCTW and to employees across the University as a whole,” the spokesperson wrote.

Thursday’s rally featured a variety of speakers, a conscious decision intended to demonstrate the union’s broad base of support, Jaeger said.

Jonathan L. Walton, minister of Memorial Church, wrote in an emailed statement that HUCTW members are “valuable and cherished members of the Harvard community.”

He added, “If there is any location on this campus where persons should feel comfortable expressing and debating ideas, particularly those of a moral and ethical nature, I would hope it would be the Memorial Church.”

For their part, speakers made a point of emphasizing their gratitude to Memorial Church for hosting the rally.

The union also thanked the student groups in attendance and Harvard’s other unions, which were all represented at the rally, for their continued support.

Jaeger said that the rally does not signal that the negotiations process is stalled. Instead, he said, it is an expression of the current sentiment within the union and among its supporters.

“When there’s a whole community of people who have an urgent concern, it’s a healthy and constructive thing to come together and share ideas and learn from each other and express that concern,” Jaeger said.