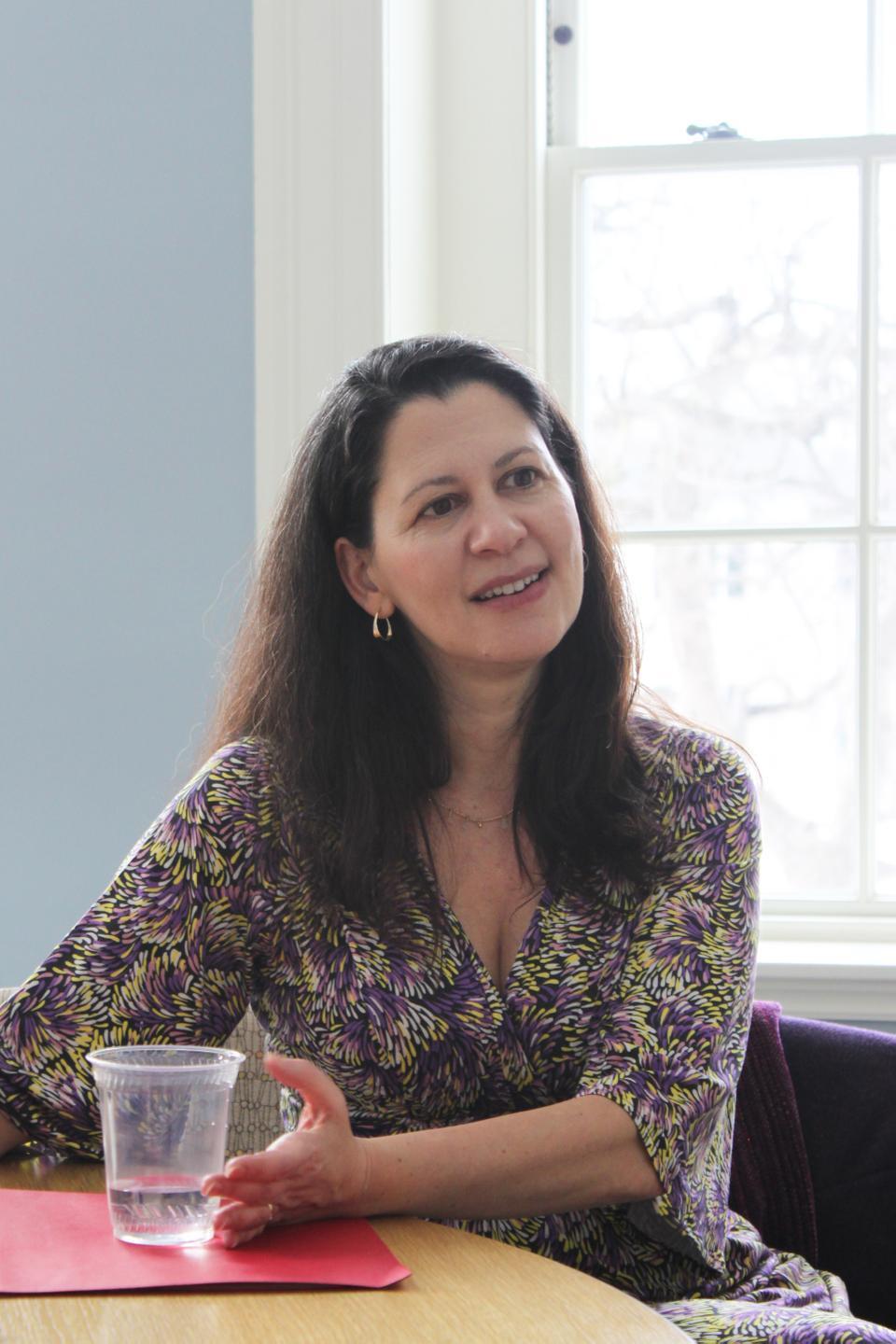 Melissa J. Block ’83 discusses her National Public Radio show “All Things Considered", which she co-hosts, and her experiences as a reporter with FM.
Advertisement
Advertisement

On March 11, FM sat down with National Public Radio journalist and host Melissa J. Block ’83 before her lecture, ...
By Ginny C. Fahs

On March 11, FM sat down with National Public Radio journalist and host Melissa J. Block ’83 before her lecture, “‘All Things Considered’ Considered.” Block has worked at NPR for her entire career, mostly on the program “All Things Considered” where she has served as a booker, tape producer, field producer, director, editor, line producer, and, most recently, a host.

Her tights are purple. For some reason, this is surprising. I feel like I know Melissa Block. I heard her voice on the ride home from school every day in Junior High: Mom drove the car, Melissa drove the conversation. But I never expected that when we met face to face, she would be wearing purple tights.

When she begins to speak she sounds just like herself—her voice even, soothing, composed. She asks me the standard questions about my concentration and year, wants to know how long I’ve been on the Crimson and what it’s like. She asks me where I went to high school, remarks on my distinct lack of a Southern accent even though I’m from Georgia. I’m supposed to be interviewing her, but she’s already started to interview me.

“I like to see that you’re taking notes longhand,” she remarks. “How retro!” That’s my cue. Now it’s my turn to interview her.

Fifteen Minutes: How do you feel when you hear yourself on the radio?

Melissa J. Block: [laughs] Oh god—that’s an ongoing struggle. It’s funny because when I go back and listen to the first stories I did as a host I kind of cringe. It’s been an evolution. If I listen back [to the first broadcasts I hosted] now I think I just sound stiffer. A lot of it is just sinking into the role. Just like anything, the more you do it the more comfortable you get.

MJB: It’s just the dream job: to host All Things Considered every day and to have that audience of 12 million people listening every week. The great thing about hosting is you’re not just doing work in the studio but you get out and do reporting. Every month or so I’m traveling and going on more in-depth stories, occasionally internationally and also around the country. You get the experience of hosting a program whose name gives you some indication of the kind of things that any day I might be dealing with, but also to plunge deeper into one story and really sort of exercise that muscle, too. You get the best of both worlds.

FM: What does a typical day of hosting “All Things Considered look like?”

MJB: I get in about 9 a.m. and read as many newspapers and websites as I can before our morning meeting. A shocking amount of the show is actually dreamed up that day. You may think that a lot of it is done ahead of time, but it really isn’t. We all meet at 10 a.m.—the hosts, the producers, the editors, maybe 15 or 20 people, and we kick ideas around. It could be anything from the Harvard email leak that I think is coming up for today’s show or anything quirky, anything joyful, something that will make people come back home over the dinner table and say, “Hey, I heard this great thing on NPR!” These ideas get tossed into a big pile, and some rise and some sink [...] We get assignments that come out at 10:30. Then we have bookers, which is what I started off doing at NPR, whose job is to go to the phone and schedule people for the hosts to interview. Between noon and 3 p.m. is when I do most of my interviews. So I’m crashing and cramming and trying to digest interviews until about 3, then writing the stuff that goes at the top and bottom of the hour between 3 and 3:30 p.m., and then we go on the air at 4. The show is 4 p.m. to 6 p.m. Then you get up and do it all over again.

FM: Tell me about one of the more memorable moments you’ve had working for “All Things Considered.”

MJB: Without a doubt the most memorable was when we were in China in 2008 when the earthquake hit. We were pretty much the only Western reporters who were there at the time. First of all, the sensation of being in an earthquake was something I had never experienced before. Now, any time when the ground starts to vibrate I have a little muscle memory and unpleasant flashback of what that felt like. Being there for those stories and witnessing what happened was a remarkable thing.

FM: Tell me more about that time in China.

MJB: We had just landed the night before at midnight, and we had just sat down and started reporting for our first interview. So we were rolling tape—we were doing a story about religion in China. We were in a big building with a lot of windows and I started hearing this tinkling sound. And your mind kind of plays tricks on you. I thought, ‘There must be a truck going by,’ and then the sound started getting louder and louder. The pastor who I was interviewing got up and bolted—he just left. And I was tethered to my producer. So I’m holding the microphone, she’s holding the taper machine, and she got up and we were tethered to each other, running out of the building. And she was rolling tape and I just started talking.

FM: What is it like to respond in the moment to an emergency as a reporter?

MJB: It just felt like a natural thing to do—it was instinctive to narrate what was happening. You’ll hear on the tape that I am slowly coming to realize what is happening and just describing buildings shaking and pieces of a church falling down and people huddled in the street and somebody who had clearly woken up from a nap or a shower who had just rushed outside naked and all of the streets filling with people and the ground kind of waving under my feet. You don’t think about it. You just do it.

FM: Where did you find the stories?

MJB: My talented producer figured out which direction we needed to go and lined up a driver and we just went and started talking to people. Pretty quickly the stories were all around you; it wasn’t hard to find them. Getting there was the hardest part because so many roads had been destroyed and bridges washed out. Sadly when there’s so much destruction all around the hard part is just choosing where to go because there is no shortage of tragedy and no shortage of really tragic stories.

FM: Do you have any favorite interviews that you’ve done?

FM: How has radio broadcast changed between when you were in college and now?

MJB: The biggest change is that radio then was terrestrial; it was coming out of a box. Now, you’re streaming—you’re listening on this phone, it comes with you wherever you go. And that is huge. You’re digesting information in a completely different way. It’s something that NPR is really wrestling with as we think about where we go in the future.

FM: Do you have any frustrations with the way that the media industry as a whole is developing?

MJB: I think the pressure to be first, it just is a mine field. I totally understand the need to be first and the desire to be breaking news, but I think there has to be some measure of understanding that this isn’t just a first attempt—you need to get things right. And when media screws up because they’re trying to be first we all lose credibility. It makes everybody look bad. To the extent that everyone can take a deep breath and remember that the most important thing is to be right, not first, I think we’d all be better off.