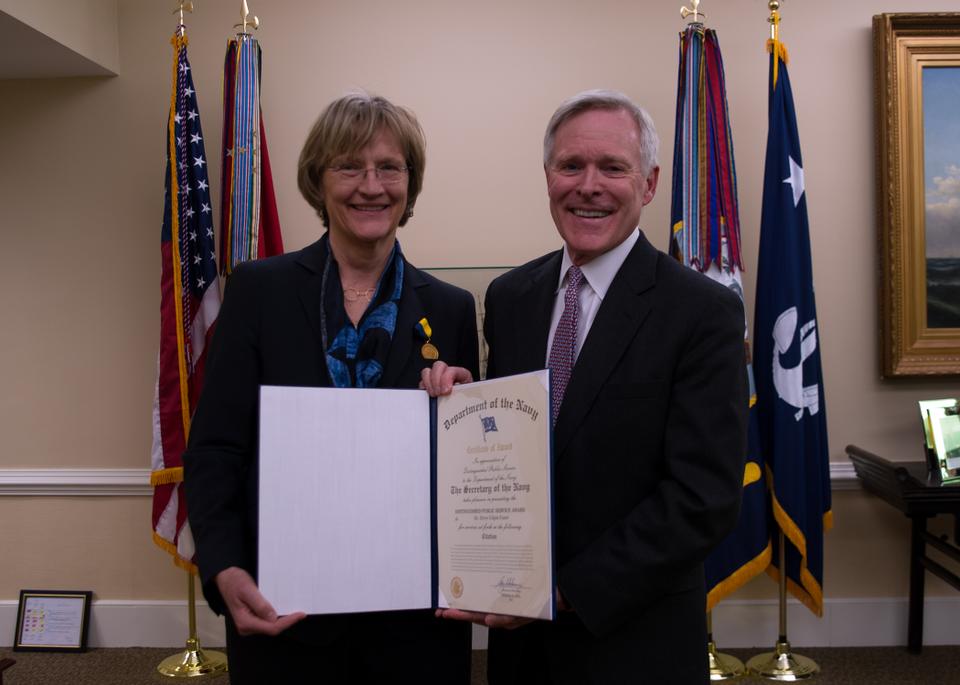 The presentation took place in a private ceremony during Faust’s visit to Washington, D.C., on Feb. 27 and 28. The primary purpose of the trip was to dissuade lawmakers from allowing the sweeping budget cuts known as sequestration to into effect, but she attended several unrelated events as well, including the ceremony with Mabus.

“I was surprised and honored by the award,” Faust said in a statement. “I am proud of the renewed relationship that we have established with ROTC, and am deeply grateful for the men and women, some of them our students, who heed the call to public service by serving in our armed forces.”

According to a U.S. Navy website, nominations for Distinguished Public Service Awards “are limited to those extraordinary cases where individuals have demonstrated exceptionally outstanding service of substantial and long-term benefit to the Navy and/or the Marine Corps.”Past recipients of the award include prominent journalists, lawyers, and politicians.

In 1926, Harvard became one of the first universities to implement a Naval ROTC program, but the program was dismantled during the Vietnam War. Following the repeal of “don’t ask, don’t tell,” a policy that barred openly gay and lesbian service members in the armed forces, Faust formally recognized the NROTC in March 2011. The step marked the end of over 40 years of tension between the University and the military. A year later, the University officially welcomed back the Army Senior Reserve Officers’ Training Corps as well.

Columbia and Yale also reinstated ROTC programs on their campuses in the months after the repeal of “don’t ask, don’t tell.”