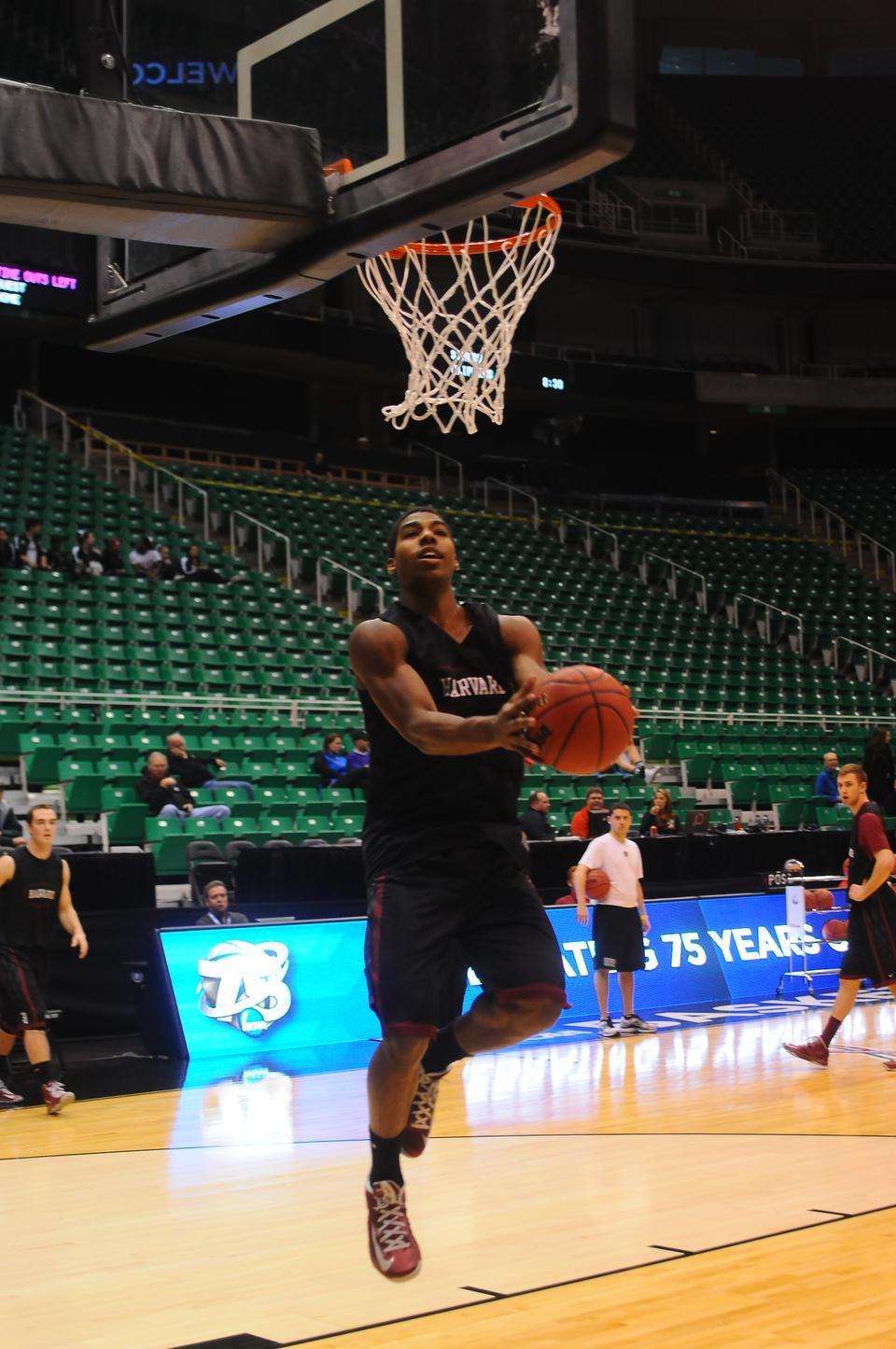 The Harvard men's basketball will need a strong performance from sophomore Wesley Saunders Thursday if it is to take down the University of New Mexico.
By Scott A. Sherman, Crimson Staff Writer

From 2011-12 to 2012-13, few college basketball players in the country improved their production more than Harvard sophomore Wesley Saunders.

The wing has gone from a benchwarmer who averaged just 3.3 points in 13.9 minutes per game a year ago to a star who led the Ivy League with 16.5 points in 37.3 minutes per contest, the 11th-most in the country.

The strange thing is, that quantum leap did not really surprise anyone at all.

The Los Angeles native arrived in Cambridge in the fall of 2011 having crossed the country to attend college. Rated the 88th-best prospect in the nation by Rivals after leading Windward High to a state championship, he turned down offers from Colorado, USC, San Diego State, and Penn to play for Tommy Amaker.

Last season, on the deepest team in program history, even the highly-touted rookie struggled to find playing time. But over the summer, the talented wing set out to earn a larger place in his squad’s rotation during his second season.

“He didn’t play a lot [last year], and I think that was very motivating for him,” Amaker says. “He really did a terrific job this past summer of how hard he worked to get better.”

One of the things Saunders improved was his jumper, and the results have been evident. After not even attempting a three last season, the sophomore shot 52.6 percent from long distance during the regular season.

“I worked on my shooting and ball handling a lot [over the summer],” Saunders says. “A lot of it [was] getting mentally prepared for the whole season.”

Those preparations began during the team’s four-game tour of Italy in August, when the wing’s improvements were on immediate display.

Despite the presence of the team’s top three returning scorers—former co-captains Kyle Casey and Brandyn Curry and junior forward Laurent Rivard—it was Saunders who shined, leading the team to a 4-0 record. During that trip, he paced the squad with 16.5 points per game, highlighted by a 21-point, six-rebound, four-assist performance against Paffoni Omegna.

“Italy was great,” Saunders says. “It showed the improvements that I made during the [offseason], and I [that] could carry [them] over to the regular season.”

Amaker too came away thinking that the sophomore was someone who would play a major role on his 2012-13 team.

“Wesley was by far our best player [in Italy], and he knew that,” Amaker says. “We told him that we were very impressed and pleased, and I think that really propelled him into this year from a confidence standpoint that he saw how well he played.”

Shortly after the team returned to the United States, Saunders learned he would be asked to play an even larger role, as news broke that Casey and Curry would be leaving the team due to their alleged involvement in the Gov 1310 scandal.

Saunders was now the team’s fourth-leading returning scorer, and his ability to get to the basket meant he was expected to rank much higher on that list in 2012-13.

In the preseason, it appeared that the sophomore would be up to the task.

The improvements in practice translated into games. The wing’s production was remarkably steady, as he scored in double figures every game while shooting 53.6 percent from the floor.

“I can’t say enough about how he has performed for us throughout the season,” Amaker says. “He’s been incredibly consistent this year. I think that was the thing that I’ve been pleased with more than anything.”

A unanimous First Team All-Ivy selection, Saunders maintained his strong performance through conference play, when he averaged 17 points per contest, including a career-high 27 against Columbia on Feb. 10.

But it is not just at the offensive end where Saunders has made a major contribution.

The team’s best perimeter defender—he led the conference with 1.9 steals per game—Saunders was often tasked with guarding the opponent’s premier player, whether that was a point guard such as Columbia’s Brian Barbour or a power forward such as Princeton’s Ian Hummer.

“That [was] just a challenge that coach had for me coming into the season,” Saunders says. “He told me he’d have me covering the best player and he wanted me to lead us on offense.”

On Thursday, that weight will likely fall on the sophomore’s shoulders one more time, as a big two-way game from Saunders will be necessary if Harvard is going to earn its first-ever NCAA tournament win.

“We want to go out and compete and do our best and do the things that we have been doing,” Saunders says. “If we play the way that we are supposed to play, then good things will happen.”