Harvard College Accepts Record Low of 5.8 Percent to the Class of 2017 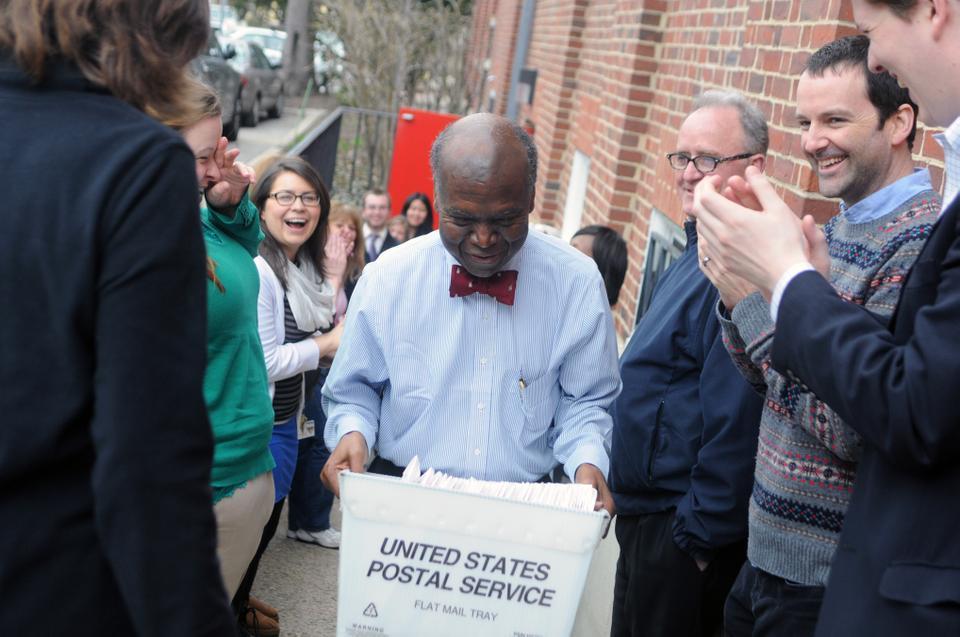 Senior Admissions Officer David L. Evans emerges from the Admissions Office with the first box of acceptance letters for the class of 2017, to be loaded onto a waiting mail truck, on Wednesday as his fellow admissions officers cheer. After an hour-long delay in the arrival of the truck, Admissions Office employees formed an assembly line to send off regular decision acceptance packets and rejection letters.
By Zohra D. Yaqhubi, Crimson Staff Writer

For the seventh consecutive year, a record low percentage of applicants received offers of admission to Harvard College. A total of 5.8 percent of 35,023 applicants were admitted to the Class of 2017, the University announced Thursday.

At 5 p.m., the University sent emails to the 1,134 regular applicants receiving offers. Taking into account the 895 students admitted to the class through the early action program, 2,029 students were admitted this year.

“The fact that we agreed to be spending $10 million more on financial aid this year has certainly caught people’s attention,” Dean of Admissions and Financial Aid William R. Fitzsimmons ’67 told The Crimson, citing what he said was one of many forces driving the large number of applicants. “It’s proof that we meant what we said: that we’re going to diversify Harvard economically and be reaching out to people from a wider range of backgrounds.”

Harvard recently announced a 5.8 percent increase in its financial aid budget for the 2013-2014 academic year, providing a record $182 million to make Harvard more accessible and affordable for students.

“If you’re not able to, and again this is what we’re doing now, to reach out to the most outstanding Latino students in the country...you won’t be educating the future leaders of America,” said Fitzsimmons, explaining the importance of reaching out to high-ability students within all minority groups.

Foreign citizens, U.S. dual citizens, and U.S. permanent residents make up over 20 percent of the class and represent 81 countries.

“No one’s being left out who has a chance of getting in,” he said of the situation at Harvard. The issue is not reaching these high-ability students who come from low-income families, but in getting them to agree to enroll at educational institutions like Harvard after high school, he argued.

The College did not share the number of students placed on Harvard’s waitlist for the class of 2017.

Fitzsimmons said that although numbers vary from year to year, Harvard has offered admission to anywhere from zero to 228 wait-listed students in recent years.

An earlier version of this article and an email news alert disseminating this article incorrectly stated that a record low number of applicants received offers of admission to Harvard College. In fact, a record low percentage of applicants were admitted to the Class of 2017. The article and the news alert also misstated the time that Harvard sent out its admission decision emails. In fact, those emails went out at 5 p.m., not 5:30 p.m. In addition, the caption of the photo accompanying this article incorrectly stated the number of rejection letters that were sent out by Harvard's admissions office.