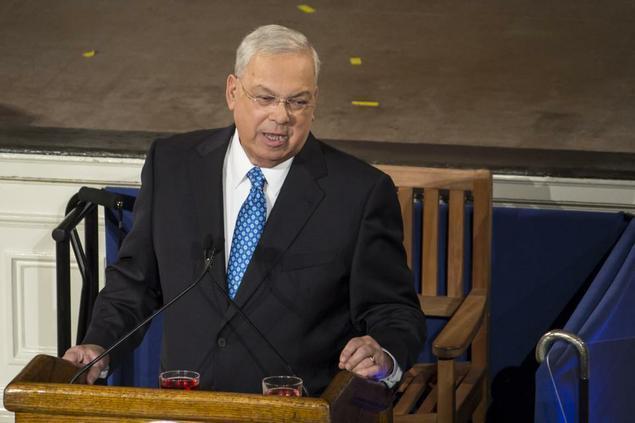 Longtime Boston Mayor Thomas M. Menino, pictured at the State of the City address in January, formally announced Thursday that he would not seek a sixth term in office.
By Matthew Q. Clarida, Crimson Staff Writer

Harvard faculty members praised Boston Mayor Thomas M. Menino, specifically highlighting his work promoting education, after his announcement Thursday afternoon that he would not seek a sixth term in office.

“Mayor Menino has been a powerful advocate for the role that education and research play in fueling innovation and prosperity, as well as expanding horizons and enriching lives,” wrote University President Drew G. Faust in a statement.

On a more personal note, Faust called the mayor not only a friend, but a mentor.

“I am personally grateful for his friendship, guidance, and advice,” she wrote. “ [I] regard myself as one of this extraordinary leader’s grateful students.”

Faust was joined by Harvard professors who pinpointed the mayor’s transformative education policies.

David Luberoff, a senior project advisor to the Radcliffe Institute’s Boston Area Research Initiative, called Menino a leader who was transformative in many areas and knew just how to approach his job. Luberoff wrote in an email to The Crimson that Menino not only knew how to cultivate good ideas, but also recognized “what it would take to actually put good ideas into action.”

This was particularly true when it came to education, Luberoff said.

Menino dedicated much of his Thursday speech Thursday to education.

Telling voters about how he was able to commit some much of the life of the city, Menino said, “I just did what I loved and then it wasn’t too hard.”

“You promise a computer for every classroom and then watch kids teach their grandmothers how to email,” he continued. “You partner with parents to keep politics out of the school committee and then you work with them to deliver quality schools closer to their homes. You read to children at dazzling new libraries in Mattapan and Brighton.”

Afterwards, Menino was even more direct about his passion for education.

“It’s the most important thing we can do in our society,” he said to the media after his announcement. “Educate [our] children, and they’ll have a bright future and they won’t turn to other issues.... We’re not perfect, but we made a lot of gains. We’ll still stay focused on education.”

As Menino serves out his term, which ends in early 2014, the first competitive campaign for mayor in decades will play out.

“Menino has represented a certain culture, a certain perspective: he’s a neighborhood guy,” said Marty Linsky, an adjunct lecturer at Harvard Kennedy School. “And the city has changed. What this election will do is give everybody a sense of what those changes are.”