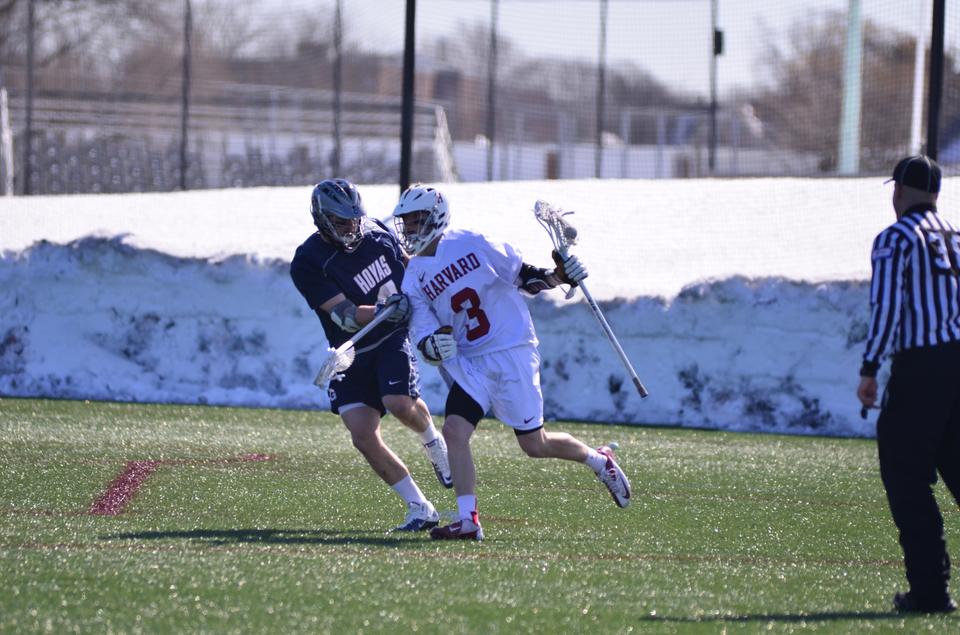 The Harvard men’s lacrosse team rebounded from two straight nail-biting losses on Tuesday afternoon, riding strong play from its freshmen to earn an 18-8 victory at Quinnipiac.

“In the last few games, we struggled to play consistently for 60 minutes,” Crimson Coach Chris Wojcik said. “But in this one, we really played a complete game and managed to come away with the win.”

Much of Harvard’s production came from players who had not been involved in the offense very much previously, including three freshmen who had career days.

All season, the Crimson has received excellent play from two of its freshman, attackman Devin Dwyer and defenseman Robert Duvnjak.  The duo has have started 11 and nine games, respectively. This was not altogether unexpected going into the season, as Duvnjak was the second ranked prospect in the nation last year and Dwyer was the fourth. Dwyer now leads Harvard with 35 points (15g, 20a), while Duvnjak leads the team with 13 caused turnovers.

In this game, however, other freshmen joined the duo with standout performances. Attackman Ian Ardrey notched the third and fourth goals of his career in addition to his second assist, midfielder Brendan Newman scored the first hat trick of his career, and attackman Deke Burns scored the first four points of his career with a goal and three assists. Dwyer added two goals and four assists, which tied for his highest number of points in any game, bringing the freshman class’ total to eight goals and eight assists in the match.

“It was incredible to see the freshmen step up like they did,” senior captain Jason Gonos said. “Dwyer, Newman, Ardrey and Burns are all great players and we know they have the ability to put up points each game. At this point in the season they have played so much and developed to the point where we don't even think of them as freshman anymore. They are critical parts of this team and they have proved many times that they have deserved their positions on the team.”

The Crimson struggled at the outset. Despite junior attackman Peter Schwartz and Dwyer scoring early, the team went into the second quarter down, 2-3.

“We started off a little slow,” Gonos said. “They came out and played us tough, right from the beginning and we just weren’t playing our game.”

But from that point Harvard dominated, beginning with a three-goal run in the first five minutes of the second period thanks to goals from Newman, senior midfielder Alex White, and junior midfielder Gabriel Mendola. The teams would go into halftime with the Crimson leading, 7-5, following two Quinnipiac goals, and scores by Harvard junior attackman Garrett Campbell and another from Newman.

“After that first quarter we realized that we needed to step it up across the board and get back to playing Harvard lacrosse,” Gonos said. “We started playing fast, pushing the ball in transition, distributing the ball on offensive, and playing strong, smart defense.”

Harvard dominated the third quarter, scoring six goals to the Bobcats’ one. Senior and junior attackmen Jack Walker and Carl Zimmerman each scored once, Dwyer scored his second, Newman secured his hat trick, and Ardrey scored twice to put the Crimson up 13-6.

Only seven seconds into the fourth quarter, senior attackman Henry Mumford scored and Wojcik felt comfortable removing senior goalkeeper Harry Krieger and giving sophomore Jake Gambitsky a shot in the cage for the second time of the season.

“Every single healthy player on the roster played today,” Wojcik said. “It was really great to see some of the players that don’t normally play get their shot.”

Mumford’s goal was followed by one from sophomore midfielder Murphy Vandervelde, who has now scored in the Crimson’s last five games. Burns and Walker then scored again a few minutes later sophomore attackman Phillip Wagley eventually capped the day with a goal of his own, the 18th of the contest.

“It was a great team effort,” Wojcik said. “14 of the 18 goals we scored were assisted, which really shows that we played well together.”

Harvard dominated Quinnipiac in ground balls, scooping up 43 to its opponent’s 32 despite losing the faceoff battle. The Crimson also managed to commit fewer turnovers, coughing up the ball 16 times to the Bobcats’ 19.

“We did really well in terms of possession and hustle,” Wojcik said. “I was really happy with how hard we fought today.”