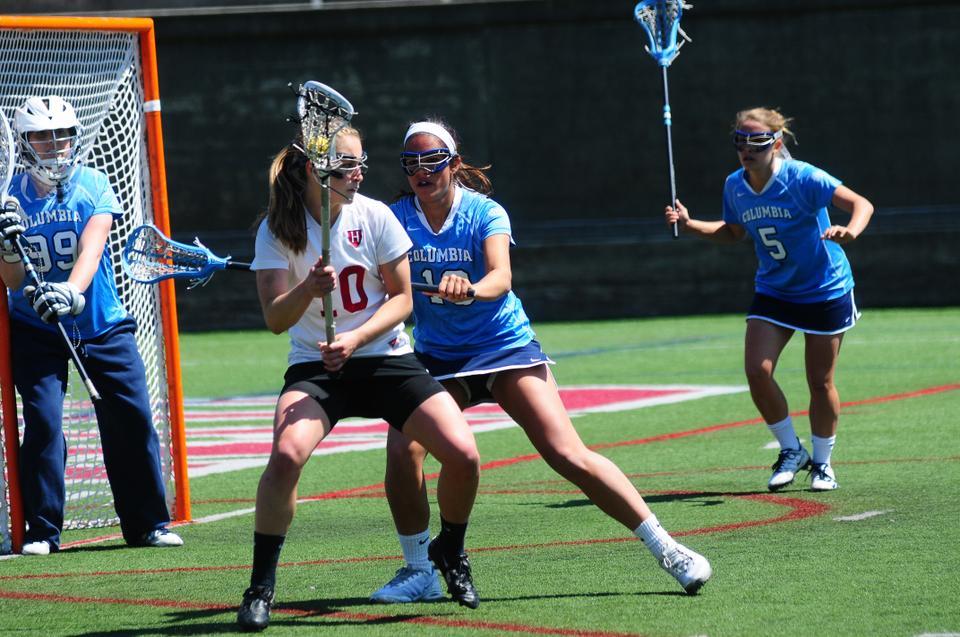 In her final game for the Harvard women’s lacrosse team, captain Micaela Cyr recorded all four of the Crimson’s four assists, as well as five draw controls and a goal as her team finished with an 18-11 win.
By Kelley Guinn McArtor, Crimson Staff Writer

On Sunday afternoon, six Harvard seniors took to the field at Harvard Stadium for their final game in Crimson uniforms on Senior Day.

Harvard (3-11, 2-5 Ivy) defended its home turf against Columbia (3-12, 0-7) in the team’s Ivy and season finale. After battling back and forth for possession, the Crimson squad was able top the Lions, 18-11, thanks to a second half surge.

Junior midfielder Kyleigh Keating opened the scoring in the contest with a goal assisted by captain midfielder Micaela Cyr.

Columbia responded with three consecutive goals from two seniors, each unassisted, to bring the score to 3-1.

“I think adjusting to the other team and what they throw at us [was a challenge],” senior midfielder Danielle Tetreault said. “I think they shut down a few of our strengths early on, and we learned to kind of navigate around that and come back.”

A drive to the net from senior midfielder Nina Kucharczyk put Harvard ahead, 4-3, heading into the final ten minutes of the first half.

“I mean in our game, if you have the ball, you’re winning,” Crimson coach Lisa Miller said. “I think we were really balanced and were moving the ball around well.”

Columbia tallied two free-position shots, the first of which came in a man-up situation to regain the lead.

In the final three minutes of the opening frame, Nicolia netted an unassisted goal and Tetreault executed a free-position goal to send Harvard into halftime with a one-goal lead, 6-5.

Harvard opened the second half with a quick offensive attack, scoring three goals in three minutes. Tetreault tallied a goal from a free-position shot, her first goal of four in the contest.

“We distributed the ball on attack, which the attack has been doing a good job with,” Miller said. “Overall it was just a good team game.”

Columbia snuck in a goal to bring its deficit to three goals.

“We know they’re a team that attacks from the crease, so we were aware of that and were trying to shut that down as much as possible,” Tetreault said.

The Crimson responded with another three-goal surge. Tetreault pocketed her second goal of the contest and junior attack Chelsey Newman notched two goals, one from a free-position opportunity and the next from an unassisted drive.

Despite the Lions’ finding the net heading into the final 20 minutes, Harvard’s lead steadily increased for the duration of the match.

“I think [Sunday] went really well,” Tetreault said. “We had a game plan, and we went out and executed it. The beginning of the game was a fight, like any Ivy League game is, and then I think we slowly put them away one-by-one.”

Todd chipped in an unassisted goal, and Tetreault drilled two more in the back of the net to bring her final tally to four for the game. Keating, Todd and freshman midfielder Meghan Bauer tallied the final three points for the Crimson for the victory, with the final score being 18-11.

Leading the Crimson in goals with four, Tetreault landed in the ninth-ranked spot in program history for career goals, with 114. Todd secured a hat trick, and Cyr notched a career-high four assists. Cyr also picked up a team-high two groundballs along with freshman Izzy Wager.

“[The seniors] have done a great job the four years that they’ve been here, and I think they’ve established a high standard in practice and they compete all the time,” Miller said. “It was a tough year in terms of record, but I thought we were in all the games and I just think the senior class—I really am going to miss them.”