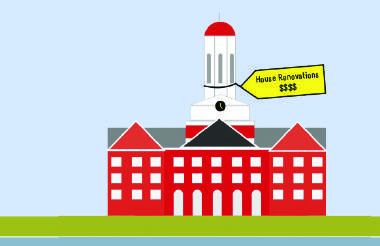 A large chunk of House Renewal's $1 billion to $1.3 billion price tag is expected to be funded by the upcoming capital campaign.
By Michelle Denise L. Ferreol and Jared T. Lucky, Crimson Staff Writers

Part Two of a five-part series on Harvard's approaching capital campaign. Part One was published on April 29, Part Three on May 1, Part Four on May 2, and Part Five on May 3.

As Harvard embarks on an ambitious, multi-billion dollar fundraising campaign, students and administrators are searching for ways to distribute an unprecedented sum of donations within the College—the Harvard school that makes up nearly a third of the University’s total enrollment.

Although coordinators of the campaign have not released the specific dollar amounts of the College’s fundraising goals, several upcoming projects—including the renovation of all 12 of Harvard’s residential Houses, the expansion of financial aid initiatives, and the construction of a new student center—suggest that a sizable chunk of the campaign’s proceeds will ultimately benefit undergraduates.

This past November, as one of the final initiatives in his administration, Bicknell helped launch the Capital Campaign Task Force—the main mediating body working to add a student voice to high-level negotiations over how the money will be spent.

“Students expressed frustration that they didn’t know what was going on,” he said. “We created the committee to re-engage students and help the administrators define some of these areas that we need funds for.”

In an interview with The Crimson this February, Dean of the College Evelynn M. Hammonds said that three of the University’s main priorities in the upcoming capital campaign were “very closely tied to the College.” These three priorities, which Hammonds called “big buckets,” are support for House Renewal, financial aid, and “teaching and learning” initiatives.

Of these priorities, House Renewal has garnered the most public attention since 2011, when Dean of the Faculty of Arts and Sciences Michael D. Smith announced that Old Quincy House would be the first building to be renovated.

The Old Quincy test project is nearing completion, and improvements to Leverett’s McKinlock Hall are scheduled to begin in early June.

Administrators have predicted that the entire project will cost roughly $1 to $1.3 billion, a large part of which is expected to come from funds raised during the capital campaign.

Student members of the House Program Planning Committee, which was tasked to issue a report with recommendations for the project, said that discussions on the role of the capital campaign in securing funds for House renewal have been ongoing since 2009, when the committee released a report detailing the state of House life at Harvard.

Former Undergraduate Council President Senan Ebrahim ’12, who has served as an HPPC co-chair, said that part of the group’s task was to determine how to most effectively utilize the College’s resources during the construction period.

“House Renewal has been a priority for administrators for as long as I can remember,” Ebrahim said.

Since then, the percentage of students receiving financial aid has increased from 40 percent to 60 percent, in part a product of more recent pushes to expand financial aid for middle-class families.

“Harvard is one of the few institutions where financial aid is growing faster than tuition,” said Jake W. C. Silberg ’15, who sits on the student-led Capital Campaign Task Force.

According to meeting minutes from a presentation given to the U. C. task force in March, Assistant Dean of FAS Development Services Beth B. Thompson said that, of the $182 million in financial aid allotted for the upcoming school year, approximately 60 percent came from scholarship gifts from donors and the remaining 40 percent came from internal unrestricted funds raised through other avenues, such as the capital campaign.

And although teaching and learning initiatives have maintained a lower profile than the other two “big buckets,” administrators have also said they want to prioritize promoting innovative pedogogical practices in Harvard classrooms with efforts like the Initiative on Learning and Teaching, announced in 2011. These initiatives may also impact the academic experiences of undergraduates.

With House Renewal plans surging forward, the financial aid program expanding, and teaching and learning efforts taking shape, several of the initiatives listed by administrators as priorities for the upcoming campaign will evidently benefit the College.

“Although it’s going to be a University-wide capital campaign, the College will definitely play a significant part,” Bicknell said.

As University administrators and fundraisers continue to define goals and priorities for the campaign, students have sought to shape the way that incoming funds will be allocated at the College.

In October 2012, a year after the Undergraduate Council published a report calling for the creation of a campus-wide student center, Faust told The Crimson in an interview that this project would be “a priority” in the upcoming capital campaign.

Motivated partly by Faust’s endorsement of a student center, the UC launched the Capital Campaign Task Force the following month.

According to several committee members, the UC task force has focused primarily on financial aid and House Renewal—two potential “buckets” that administrators and fundraisers have also prioritized.

“It’s been portrayed to be a very big priority in the materials that we’ve received,” he said.

Both administrators and members of the task force placed a premium on House Renewal as well, committee members said.

“These are dorms that are getting close to be 100 years old,” Silberg said. “Now that they’re moving into this phase of housing renewal, I think that’s something that students will really benefit from.”

Task force member Michael E. Danto ’13 said that the Harvard Alumni Affairs and Development Office has also emphasized the central role of House Renewal in their discussions with the task force.

“We’ve heard that House Renewal is something that they’re talking about a lot with potential donors,” he said.

While some committee members questioned the efficacy of the task force in shaping administrators’ priorities, others said that the current goals of the University have already been influenced by student input collected over the past decade.

“I feel like we’re picking from options that are more or less laid out for us,” said Greenberg, who said that he doubted that the UC task force had the clout necessary to change the capital campaign objectives already outlined by administrators. “It’s not like they’re taking huge pains to make sure that student voices are a big part of the process.”

Other members pointed the role that student input is currently playing in plans for House Renewal as a sign of the University’s willingness to accommodate undergraduate concerns more broadly.

“One thing that I was impressed to find out was how much prior student input has been collected over the course of the last decade and is going into decisions that the University is making today,” said Danto.

The influence of previously collected student input left the task force hopeful about the potential for change.

“It seems like a lot of the recommendations we make could affect some of the specific issues that the University has planned,” Danto said.