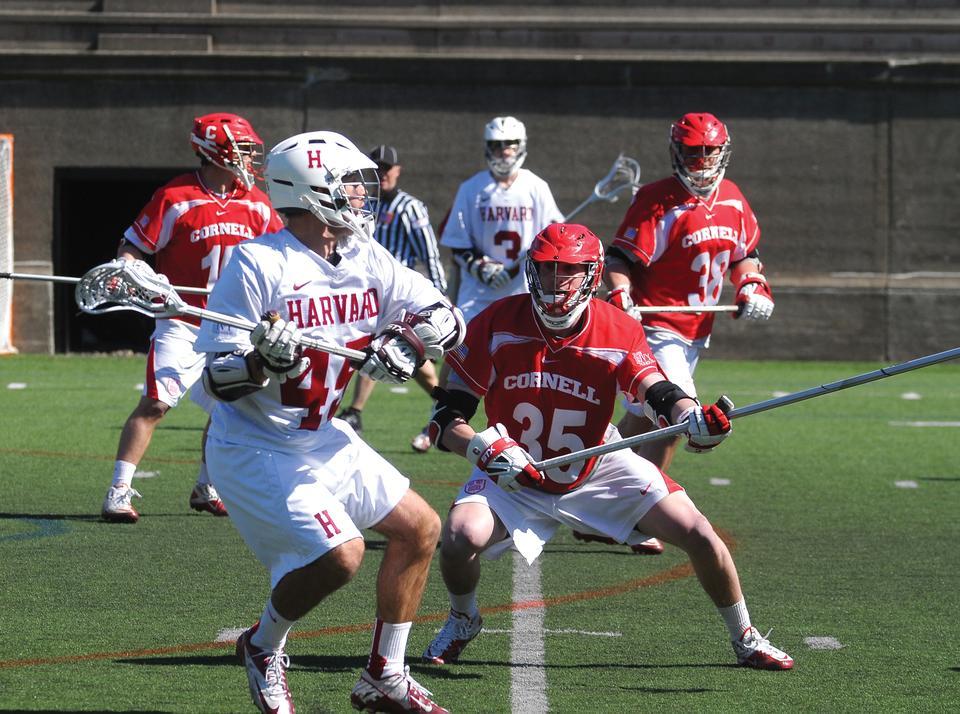 Junior attackman Garrett Campbell, above, scored in the third quarter to knot up the score, 7-7, against No. 2 Cornell on Saturday at Harvard Stadium. The Crimson built its lead to three before the Big Red came back in dramatic fashion, scoring five unanswered including three-straight from Max Van Bourgondien.
By James M. Acer, Crimson Staff Writer

In one of the most hotly-contested Ivy League battles of the 2013 season, the Harvard men’s lacrosse team was forced to watch as No. 2 Cornell celebrated on the field at Harvard Stadium after mounting a dramatic fourth-quarter comeback to take down the Crimson, 14-12, on Saturday afternoon.

After three quarters of play in which the two sides were rarely separated by more than a goal, Harvard sophomore midfielder Murphy Vandevelde responded to a Cornell goal with a tally of his own, pushing the Crimson (4-6, 1-2 Ivy) ahead, 12-9, with just under 10 minutes to play. Teetering on the brink of its first conference loss, the Big Red (10-1, 4-0) responded in a manner befitting the nation’s second-ranked squad. Five unanswered Cornell goals, including the final three from senior midfielder Max Van Bourgondien, left the Crimson all but stunned, and it was forced to leave the field wondering what could have been.

“We played excellent lacrosse for 50 minutes, just not the whole game,” Harvard coach Chris Wojcik ’96 said. “In the fourth quarter, Cornell really stepped up and made plays.”

Harvard entered the final frame with a 10-7 lead over the Big Red, and the two sides traded goals in the quarter’s first few minutes, with the Crimson’s buffer never falling below two. But that all changed with nine minutes to play. Sophomore midfielder Connor Buczek took a feed from senior Connor English and fired a shot past senior goalkeeper Harry Krieger to bring his team within two.

Just 50 seconds later, the lead was dashed to one on a distance shot from senior attackman and former National Player of the Year Rob Pannell. Harvard clung to its one-goal advantage for the next five minutes, but it proved too fragile to last.

With less than four minutes to play, Van Bourgondien took over. He began by taking a feed from English and beating Krieger to knot the game at 12 apiece. The same duo connected less than a minute later, and Cornell took its first lead since early in the third quarter. Van Bourgondien then all but put the nail in the Harvard’s coffin with a third goal, unassisted this time, in the waning minutes of the game.

Despite a late Cornell penalty, Harvard’s frantic attempts for a late comeback were denied. Harvard’s loss marks the Big Red’s 14th straight victory over the Crimson, a streak which dates back to 1999.

Harvard held a slight 32-29 edge in ground balls on Saturday, but trailed, 29-23, in shots on net, with the entirety of that difference attributable to the pivotal fourth frame. The Crimson capitalized on four of its nine man-up opportunities, while Cornell recorded just one man-up goal on three chances. Both Krieger and his counterpart, senior AJ Fiore, were strong in net, grabbing 15 and 11 saves, respectively.

Cornell’s Pannell tallied two goals and three assists on the afternoon, but it was senior teammate Steve Mock that provided the most offense with a career-best six goals.

The defeat drops Harvard to a tie for fifth place in the Ivy League, half a game behind No. 16 Yale and No. 17 Penn.

The Crimson entered the second half on Saturday with a 6-4 advantage, but that lead was quickly erased by a trio of Cornell goals which left Harvard trailing by one with just over 10 minutes remaining in the frame.

With the Crimson defense on its heels, Krieger grabbed a save after a lengthy Cornell possession to slow the Big Red tide. Harvard responded with a run of its own. Slashing and pushing penalties on the other end gave the Crimson a two-man advantage, and after a couple of stalled efforts, junior attackman Garrett Campbell weaved through a seam in the Cornell defense and finished from point-blank range to knot the game at seven.

Harvard capitalized on yet another Cornell penalty on the ensuing possession that allowed Dwyer to score his second goal of the game. The momentum continued off of the following faceoff, as White maneuvered through the Big Red defense and finished from close range.

The Crimson added one more to enter the final frame with a three-goal cushion, and the two sides traded goals early in the quarter before Cornell’s decisive run.

“I’m really proud of our effort,” Wojcik said. “[Cornell] just found a way to win, and we didn’t.”