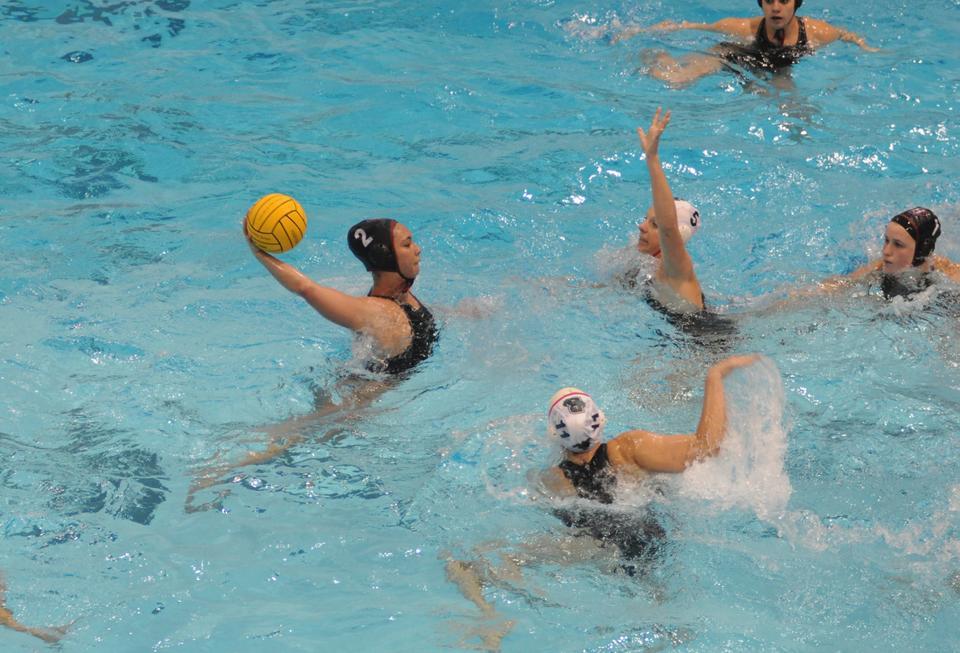 Co-captain Aisha Price, shown above in previous action, finished the regular season with 57 goals, 34 assists, and 51 steals, all team-highs. With the postseason remaining she has a shot at besting her 65 goals from last year. By Robert F Worley
By David Steinbach, Crimson Staff Writer

The Harvard women’s water polo team was lucky to make the short drive to Providence this weekend for the Brown Invite, because the trip was much longer for some of the team’s opponents.

Facing off against two squads from the east coast and two from the west, the Crimson (14-13, 3-2 CWPA) defeated George Washington on Saturday but then lost three straight times, twice to ranked teams.

The action served as Harvard’s final tune-up before its postseason tournaments, which commence with the Southern Division Championships next weekend.

“We’re always trying to look to get good wins, no matter if it’s in a tournament or a regular season game,” co-captain Aisha Price said. “But we’re not trying to look ahead. We want to play this weekend as best we can against really good teams and learn what we can from this weekend building into next weekend.”

The Crimson’s final game of the regular season came against No. 3 Arizona State (23-5)—a team whose only losses on the year have come to teams ranked in the top five nationally.

Harvard found itself in the game going into the intermission, trailing 8-5. But the Sun Devils took control in the second half, outscoring the Crimson by six goals to secure the victory.

Junior Shayna Price, the squad’s leading scorer for the third game in a row, tallied four goals and contributed an assist. Her sister, Aisha Price, posted two goals and three steals to help spur the offense in the first half.

In a game that saw considerable offense from both teams, the Roadrunners (12-20) ended up on top in an early start on Sunday morning.

Despite a career day from freshman Charlotte Hendrix, who contributed ten points on the game, Cal State Bakersfield outscored Harvard in the first three periods of play to ride to a 17-12 victory.

Hendrix registered a hat trick along with a career-high seven assists on the day to spearhead the Crimson attack. Shayna Price found the back of the net five times.

The Roadrunners built themselves a lead before intermission, outscoring Harvard by three goals in the first period and by two tallies in the second.

The second half seemed to be an entirely different game, as the two teams combined to produce 18 goals. After the two periods went down as even, with both the Crimson and CSU scoring nine times apiece, Harvard ultimately could never recover from the early deficit.

In its second matchup of the year against the No. 12 Tigers (20-5), the Crimson could not keep pace with a high-powered Princeton offense and fell by an eight-goal margin.

The first period turned out to be the killer for Harvard, as the Tigers found scoring from a variety of sources to jump out to a 7-2 lead.

The Crimson outscored Princeton by one in the second period to bridge the gap, but a stout defensive effort from the Tigers after the intermission held the Crimson to just two more goals.

The Tigers received two big performances from junior Katie Rigler and freshman Pippa Temple, who combined to tally nine of the team’s 17 scores.

On the other end, Shayna Price led Harvard with a hat trick, and co-captain Elise Molnar and freshman Rachel Lobato added on two goals apiece.

In its first game of the tournament, the Crimson took advantage of a huge fourth quarter to ride to a 12-6 victory over the Colonials (13-12).

Harvard entered the fourth period up only two. But fueled by a pair of tallies from Aisha Price, the team went on to outscore George Washington by a 5-1 margin in the quarter to seize control of the game.

“We were up the whole game, but we just wanted to finish the game strong,” Price said. “We just kept on attacking and were able to really pull away in the fourth quarter.”

Price led the Crimson with a game-high five goals, and Hendrix contributed a hat trick of her own while also posting a team-high three steals.

Both squads struggled to find offense in the first quarter and played to a 2-2 tie after the first eight minutes.

But the Crimson outscored the Colonials in the second period to take a 6-3 lead entering intermission. George Washington brought itself within two in the third period, setting up the opportunity for Harvard to pull away in the fourth.