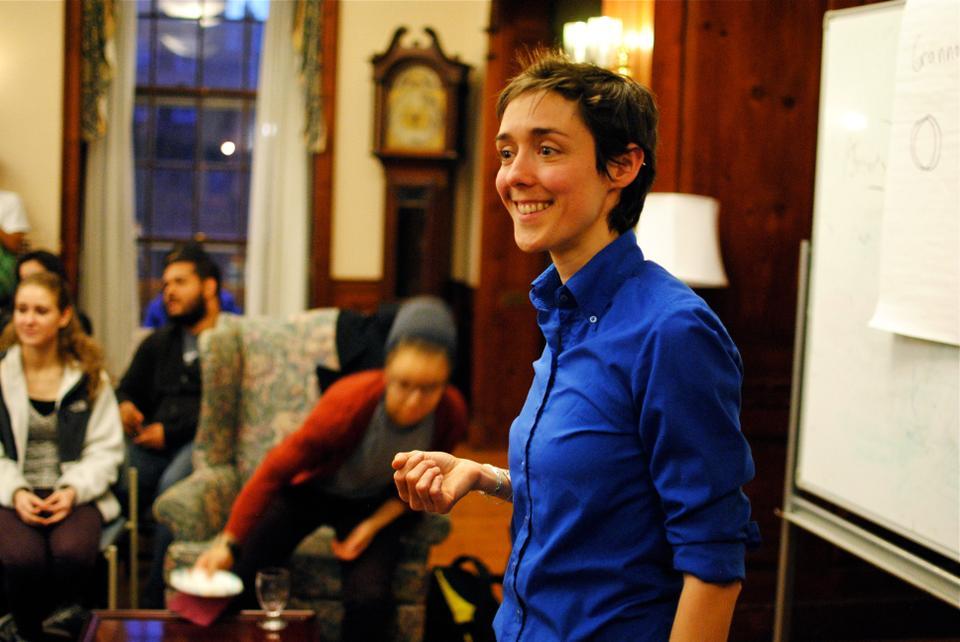 Laure E. “Voop” de Vulpillieres ’02, a non-resident tutor in Kirkland, shared her secrets for success at asking people out on dates with about 80 students gathered in Cabot House Living Room Friday night.

“I think I’ve asked out 53 people, and I’ve gotten rejected plenty of times, but I’ve also had a lot of awesome dates,” said de Vulpillieres during the dating workshop, entitled “Reading the Signs.”

During the discussion she outlined her five-part process for getting a date, which includes figuring out where to meet people and how to show signs of interest in a person. The workshop featured everything from an explanation of a sociological theory regarding personal ties to breakout moments when members of the audience could practice giving casual physical contact during a conversation.

The event attracted so many students that it had to be relocated from its original location, the Cabot House Senior Common Room, to the larger living room space.

Throughout the workshop students participated in a number of activities meant to prepare them for the dating world. For example, students brainstormed ways to approach a stranger by the food table at a party, coming up with suggestions that included complimenting the person and asking him or her questions about the food. To teach students how to show signs of interest and gauge a person’s level of interest, de Vulpillieres asked the audience to hold the gaze of a nearby stranger for 30 seconds.

The workshop was first offered last year in Kirkland after de Vulpillieres noticed that Harvard students did not go on many dates despite the many students in the college-heavy city of Boston.

The program’s popularity led to it moving to the Quad with the help of Cabot’s sexual assault and sexual harassment prevention tutors Bethany A. Kibler and Roman Feiman.

“Dating and relationships are such a struggle for so many students, yet it’s such a vital part of student life and life in general,” Kibler said.

According to de Vulpillieres, the process she has developed stemmed from her own experiences as a lesbian looking for love on Harvard’s campus.

“Straight people can be lazy at Harvard. When you’re queer, you don’t have the same ability to run into lots of single, intelligent people,” she said.

She acknowledged that the act of asking someone on a date can be uncomfortable, but encouraged students to embrace the “inherent awkwardness” of the situation.

“This never gets comfortable,” de Vulpillieres said. “But if you’re obviously uncomfortable, it’s actually really cute. [And] if they say no, they’re going to say it nicely because it’s obviously hard for you.”

Annie K. Rak ’16, who attended the workshop with other members of her entryway, said she though the step-by-step dating process proposed by de Vulpillieres might be practical and useful.

“I liked how there were specific steps,” she said. “It’s helpful for me to have a more concrete strategy.”