Dennis Ritchie '63, The Man Behind Your Technology 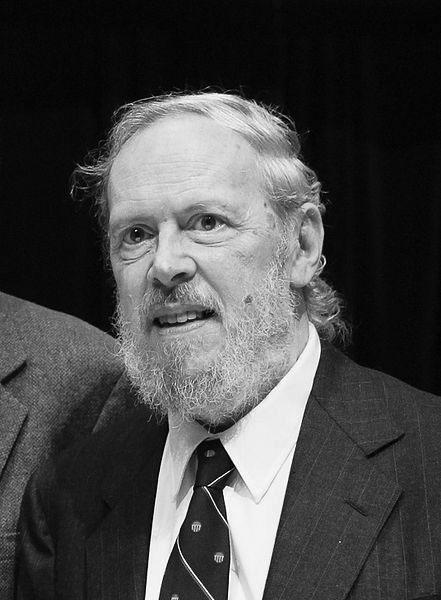 “I have memories of standing in circles of people, who didn’t realize who he was. They would offer some explanation about the C language, Dennis would politely offer an alternate opinion, and the speaker would adamantly explain that Dennis was wrong,” Margo I. Seltzer ’83, professor of computer science, said of Dennis M. Ritchie ’63.

Friends and colleagues say modesty and kindness defined Ritchie, the co-creator of the widely used C programming language and Unix operating system, who passed away in October 2011.

Born in Bronxville, New York, Ritchie’s family moved to Summit, New Jersey, where Ritchie would graduate from high school. One of the nation’s leading computer science pioneers, Ritchie spent both his undergraduate and graduate years at Harvard. He studied physics at the College and lived in Wigglesworth and Leverett House. As a graduate student, Ritchie studied applied math.

Ritchie would rewrite the world of procedural languages during his career at Bell Labs, which began as a doctoral student at Harvard in 1967 and ended with his retirement in 2007. Bell Labs ran in the family. Ritchie’s father, Alistair E. Ritchie, had also had a long career there.

Brian W. Kernighan, a professor of computer science at Princeton, was a colleague of Ritchie at Bell Labs for three of those four decades. As fellow scientists, they co-authored the program and book “The C Programming Language.”

Selzer said Ritchie and Kernighan’s book “The C Programming Language” was what “many people in the industry refer to as ‘The Bible.’”

Programmer Charles Petzold commented on C’s “unlimited flexibility” in a piece published in the New York Times in 1996.

“It appeals to the macho instincts of young and wild PC hackers, as well to the puzzle-solving impulses of more mature programmers because of its power and the variety of ways to solve problems,” Petzold wrote.

C was the foundation for the creation of Unix, which Ritchie created with Bell Labs colleague Kenneth L. Thompson. Unix “has essentially been the model of modern operating systems for the past 35 years,” according to Selzer, and serves as original ancestor for current Windows and Apple personal computers operating systems.

Ritchie and Thompson were awarded the Turing Award, the highest honor in computer science known informally as the Nobel Prize of computing, in 1983 for their development of Unix. In 1998, they were awarded the National Medal of Technology from President Bill Clinton.

“Ritchie was under the radar,” Ceruzzi said. “His name was not a household name at all, but...if you had a microscope and could look in a computer, you’d see his work everywhere inside.”

“Ritchie bears more personal responsibility than anyone else for C and Unix, and hence for their many derivatives. The world would be a VERY different place had he not created these things,” Lewis wrote.

MAN BEHIND THE SCREEN

Ritchie was fascinated by naked mole rats and hated wearing ties. He had a dry sense of humor and was known to pull pranks on colleagues at Bell Labs.

Kernighan recalled Ritchie as being “private, kind, and extremely funny.”

“I saw lots of different facets [of him] but all fundamentally centered around work as opposed to social life,” Kernighan said. “He was not a party kind of guy, but he definitely was incredibly good to work with. He had a wonderful dry sense of humor that showed up very frequently.”

During his college years and throughout his life, Ritchie is fondly remembered as quiet, kind, and highly intelligent.

Seltzer met Ritchie when she was a graduate student at the University of California, Berkeley.

“I was fairly close with the people who developed Berkeley Unix, and we all hung out with Dennis and the Bell Labs folks at conferences,” Seltzer said. “He was a very quiet and modest person with a wonderful, warm demeanor, and a great sense of humor.”

Harvard physics professor Paul Horowitz ’65 went to high school with Ritchie and stayed with Ritchie and his College roommates during what the newly admitted students visiting weekend, what is now called “Visitas.”

“I remember him being a nice guy who put me up for a couple of nights,” Horowitz said. “He’s a computer guru.”

Other than being a computer whiz, Ritchie was also widely read, interested in classical music, and was quite knowledgeable on a broad range of topics.

Seltzer recalled a trip to the San Diego Zoo with Ritchie and several other people.

Kernighan described Ritchie as the type who wore jeans—specifically, black jeans. He also wore a t-shirt or a polo shirt with alternating stripes.

“All of us were creatures of habit,” Kernighan said. “We disliked dressing up.”

Kernighan remembers an instance when both he and Ritchie had to provide photographs of themselves for a PR type of publication that the two had authored a paper for.

“The publishers of this in house propaganda stuff basically sent it back and said there’s something wrong with these photos, would you mind sending them in again and asked if we would mind wearing ties,” Kernighan said.

Kernighan and Ritchie refused to retake their pictures with ties. “They used the tieless pictures,” he said.

Kernighan said that though Ritchie is gone, his colleague’s legacy is everywhere.

“Dennis’s legacy is the stuff that makes it work. The operating system, the Internet, phone system, all of that system is written in C...and that’s Dennis’s legacy.”