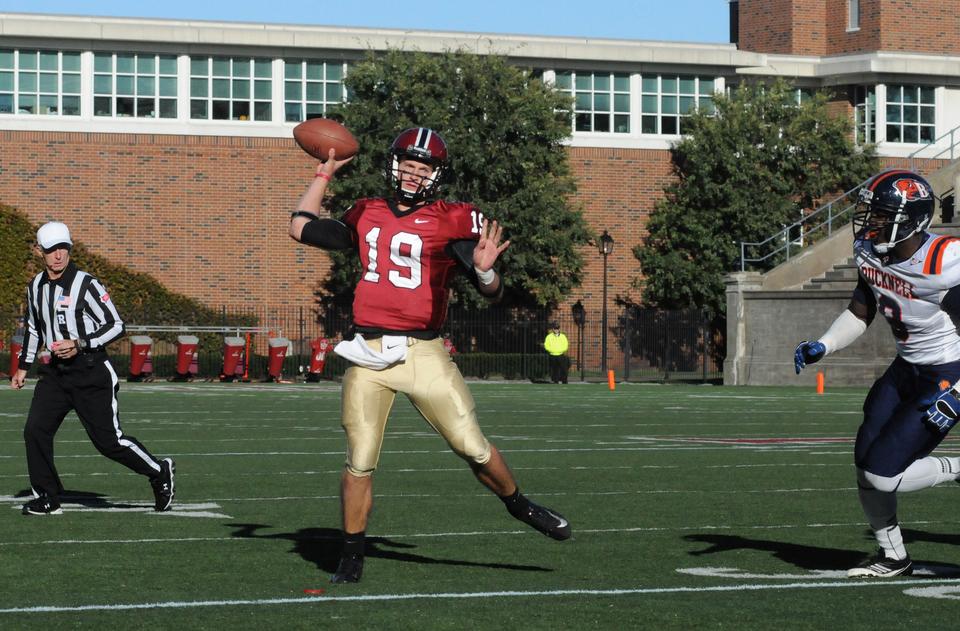 In the final game of senior quarterback Colton Chapple’s collegiate career, Crimson coach Tim Murphy called a screen pass, and the quarterback was not happy about it.

“[Chapple] goes, ‘Coach, that play stinks, don’t run that play,’” Murphy recalled. “I [said] ‘hey, just shut up and play,’ but he was basically right.”

The senior’s willingness to speak up and his understanding of the game were not things that would have come naturally to the signal caller just a few years ago. But Chapple’s confident leadership in the year’s final contest—a 34-24 win over Yale in which he scored three touchdowns, including a four-yard pass to junior Cameron Brate to give Harvard the lead with three minutes to go—represented the culmination of a career that began with a one-to-one touchdown-to-interception ratio and ended with the greatest statistical season any Harvard quarterback has ever had.

During the 2012 campaign, Chapple was the architect of the highest-scoring offense in the history of the Ancient Eight. The Ivy League Offensive Player of the Year threw 24 touchdown passes and accounted for 3,169 yards of total offense, both Crimson records, while also finishing second in the Football Championship Subdivision in passing efficiency. In a 39-34 loss to Princeton on Oct. 20, Chapple broke the Harvard single-game passing mark with 448 yards while tying his own record with five touchdown passes.

“I don’t know if we’ve ever had a kid that’s ever played better,” Murphy said. “In terms of clutch performances game after game, just pinpoint accuracy, tremendous decision making.... He’s as good as anybody that’s ever played here.”

To get to that elite level, Chapple evolved as both a player and a leader over the course of his career.

Despite not being a major recruit, the Alpharetta, Ga., native got to work early in an effort to develop chemistry with his incoming teammates. The summer before coming to Harvard, Chapple traveled to nearby Dunwoody High School to throw passes to Treavor Scales, his future classmate and running back.

“He already had a grasp of some of the concepts we were running here at Harvard before we got [to school],” Scales recalled. “From that point on, I saw his leadership capabilities, and I saw too that he had one heck of a mental grasp on the game.”

Despite that mental acumen, Chapple struggled when called upon for the first time. Tasked with filling in for injured quarterbacks Andrew Hatch ’11 and Collier Winters ’12 during his sophomore season, Chapple completed just 48.8 percent of his passes and threw as many interceptions as touchdowns in three starts in 2010.

But within a year, Chapple had moved up to number two on the depth chart, and this time, when his opportunity came along after Winters injured his hamstring in the team’s season opener, the quarterback was ready to excel.

With Murphy able to take the reins off the passer in a way he hadn’t been able to a year prior, Chapple led his team to a 4-0 record during which the Crimson outscored its opponents, 138-44. The junior threw for 414 yards—second-most in Crimson history—in a shootout win over Cornell, then followed that up by tying a Harvard record with five touchdown passes a week later against Bucknell. But despite those performances, Winters was handed back his starting job in week six, and he kept it for the rest of the year.

This season, then, was the first time that Harvard was truly Chapple’s team. Finally first on the depth chart, the senior was dominant in 2012, putting up gaudy statistics despite often being pulled in the second half when his team was ahead by multiple touchdowns.

“He really [put up] some numbers that are unbelievable,” Scales said. “The fact that he was setting records in three quarters of football—in a half—it’s astounding.”

In addition to setting numerous passing marks inside the pocket, the quarterback was also a major threat to scramble. His 602 rushing yards were fifth-best in the conference and tops among signal callers.

“You didn’t know if he was going to beat you with his feet or with his arm,” Scales said. “You had to respect every aspect of [his game]...[so] we were running against six-man boxes for the majority of the season. That’s easy money for me and the offensive line. We love that.”

And as Chapple improved as a player, he blossomed as a leader as well.

“This year he was an extraordinarily confident quarterback, and because of that, he wasn’t afraid to hold his teammates to the same high standard he holds himself,” Murphy said.

“He expects the absolute best out of everybody on every single rep,” Scales explained. “If you slack off, he will call you out; he has no problems doing it. He’s not going to, like, be a jerk to you or anything like that...but he’s going to let you know, ‘hey, I need you to give everything you’ve got.’”

Scales said that attitude gave the team an enormous amount of confidence this season.

“He’s good at keeping us on our toes, keeping the mood light to the point where we can just relax and play ball,” Scales said. “He takes control of that huddle. You can look into his eyes and know, alright, it’s time to go win this thing. And when he says that, you know we’re good to go, we’re going to win it then. He makes it seem so simple. Execution is nothing for him, it’s another order of business.”

The relationship that Chapple began building with Scales over the summer four years ago continued to flourish this season, when Chapple, according to Scales, was a “film rat.”

“All the running backs and the offensive line used to sit down together watching morning game film,” Scales explained. “And he’d always be right there with us, asking questions.”

“His football IQ was outstanding,” Murphy added. “He was like having a coach on the field.”

That intelligence will be put to good use in Chapple’s next pursuit—working as a player scout for the Cleveland Browns.

And as Chapple moves onto the next chapter in his life, it was that final Game, in which the quarterback refused to throw a screen, that capped a record-breaking season that the quarterback will never forget.

“[All the] hard work during the offseason, during the previous three years we’ve been here, kind of came to fruition [against Yale],” Chapple said. “Walking off that field with 25 other seniors who I got to share that experience with is something I’m always going to remember.”

—Staff writer Scott A. Sherman can be reached at ssherman13@post.harvard.edu.