Amidst Celebrations, Faust Warns of Grave Repercussions of Sequestration 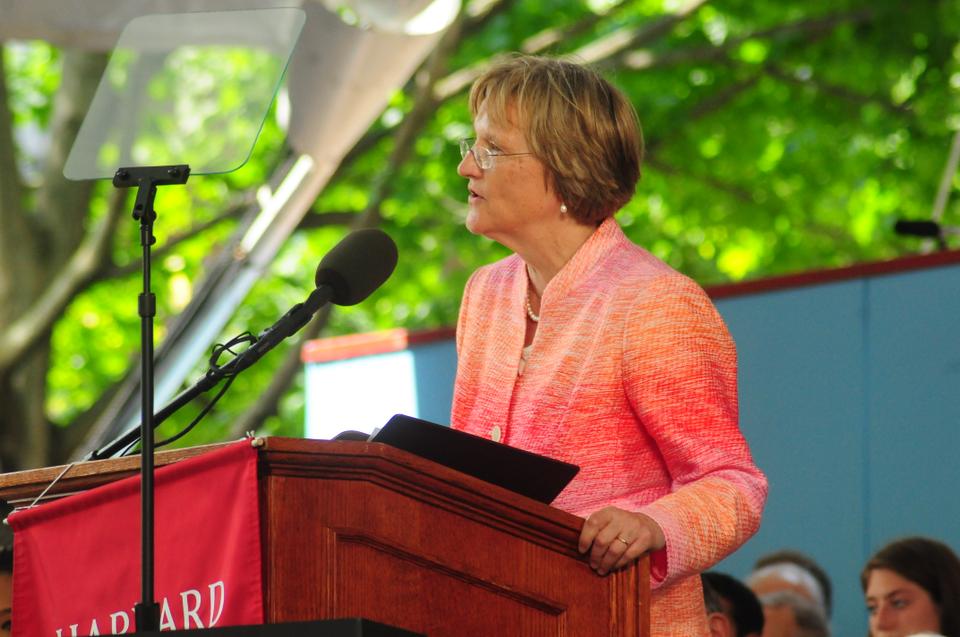 Addressing thousands of new graduates and their supporters in Tercentenary Theatre, University President Drew G. Faust argued Thursday afternoon that research spending cuts stemming from sequestration threaten Harvard’s ability to mount an effective intellectual response to crises like those experienced this year. Faust said that as a result of the cuts Harvard stands to lose as much as $40 million in federal funding annually—about six percent of what the University received from the federal government in fiscal year 2012.

Striking a somber tone on an otherwise celebratory day, Faust maintained that Harvard not only plays a role in facilitating important conversations in the aftermath of tragedies and disasters, but also plays a foundational role in researching solutions to climate change and physical injury, among other issues.

“Our broader and ongoing responsibility as a university is to ask and address the larger questions any such tragedy poses: to prepare for the next crisis and the one after that, even as we work to prevent them; to help us all understand the origins and the meaning of such terrible events,” Faust said. “We do this work in the teaching and research to which we devote ourselves every day.”

But Faust said that work is put at risk by the already apparent effects of the sequester. Just three months after the failure of legislation that would have stopped the across-the-board cuts to federal discretionary spending known as sequestration, Faust said, fewer and fewer research grant applications are being approved for funding, and even existing awards are being scaled back.

Faust has been vocal this year about the potentially harmful effects of the sequester. In February, she gave a speech before the American Association for the Advancement of Science in which she called sequestration a threat to “intellectual life,” and then traveled to Washington, D.C., in February to petition lawmakers to stop the cuts. But Thursday’s speech, delivered at the afternoon exercises of the University’s Commencement, was her most public warning against sequestration to date.

On Thursday, Faust framed her speech around three disruptive events which each caused the University to close its doors this year—Hurricane Sandy in October, the February blizzard dubbed “Nemo,” and the Boston Marathon bombings and their fallout in April. Prior to this academic year, Faust noted, Harvard had not canceled class since a historic 1978 blizzard.

“These three unusual days underscore and illuminate the usual work of this University: calling on knowledge and research to address fundamental challenges and dilemmas with resources drawn from the widest scope of human inquiry,” Faust said.

“The challenges facing the world are too consequential, the need for knowledge, imagination and understanding is too great, the opportunity for improving the human condition too precious for us to do anything less than rise to the occasion,” she said.