Once Home to Kagan and Warren, HLS Faculty Still Only 20 Percent Female 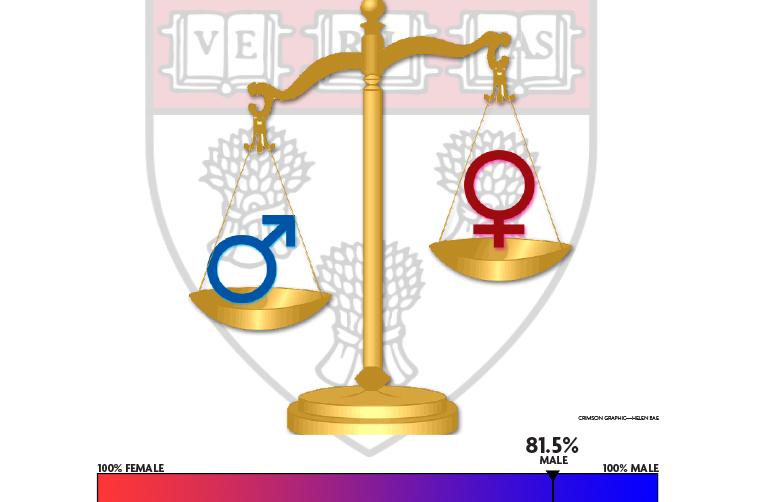 Part I of a three-part series on gender disparity issues at the Law School. Part II ran on May 8, and Part III ran on May 10.

Just 20 percent of U.S. senators are female. Women make up a mere 21.6 percent of the lawyers who serve as general counsels to Fortune 500 companies. Only three of the nine Supreme Court Justices are women.

But these figures are still higher than the proportion of women within the ranks of the Harvard Law School faculty.

At Elizabeth Warren and Elena Kagan’s former place of work, women constitute fewer than a fifth of all professors and assistant professors of law—a disparity that Harvard Law School Dean Martha L. Minow called “absolutely inadequate.” With only 17 women among 92 tenure-track faculty members, according to the Law School’s online directory as of May 6, the gender imbalance of Harvard Law School’s faculty is comparable to that of other elite law schools, yet still among the most severe of the approximately 200 law schools nationwide.

Concerns about gender inequality have spread throughout campus as a new student-run coalition called Shatter the Ceiling draws hundreds of community members together to address these issues, faculty members pursue research on gender disparities, and the administration pushes for new strategies to level the playing field. Amidst this growing movement, some have raised questions about the impact of gender inequality within the ranks of the faculty, in the classroom, in student organizations, and in life after Law School.

Among their top concerns is the small proportion of women on the faculty, an issue they say is rooted in the Law School’s history and today impacts hiring decisions, faculty conversations, and topics of intellectual inquiry.

BURDENED BY THE PAST

Portraits of tenured professors arranged in chronological order line a wing of the Law School’s new student center, looking down on students as they walk to class each day. But students cannot see a woman’s photograph until they pass the 1972 mark, and can only count a handful more in the next few decades.

More than 20 years after female students first stepped foot on campus, the Law School in 1972 granted tenure to its first female faculty member, Elisabeth A. Owens. But she did not attend faculty meetings, and her appointment “was widely regarded as not genuine,” according to Daniel R. Coquillette, a visiting professor and the former dean of Boston College Law School.

Coquillette is currently working on a history of Harvard Law School that will devote a significant section to the history of gender at the school. He said that the Law School’s progress on gender issues came relatively late, after other law schools across the country had already taken significant steps towards welcoming women.

“The appointment of women to the tenured faculty is so recent that many of the pioneer women are still right there as active faculty members,” Coquillette said, referring particularly to Law School professors Martha A. Field ’65 and Elizabeth Bartholet ’62, two of the first women to successfully complete the tenure process.

Field recounted that when she first joined the faculty as a tenured professor in 1979, the Law School had “such a terrible reputation” among women in the field.

“It used to be a nice male club,” she said. “It really did sort of mess up the boys’ club when women came on.”

Field said that in the early years, the hiring of female faculty members was slowed by concerns about tilting the political direction of the school leftward.

“For a while, you sort of had the feeling that it was hard to hire women because people had one idea of what a woman should be,” Field said. “They assumed that if you pushed for women or minorities that you were leftist, radical, and pushy.”

Since that time, acceptance of female faculty members has improved—a development highlighted by the appointment of two female deans, Kagan in 2003 and Minow in 2009. But Minow herself acknowledges that these changes are still not enough.

“Now we have women serving as partners at law firms, on the Supreme Court, making a difference in all walks of legal life,” Minow said in a March interview. “On the other hand, the small relative number of women who are partners at law firms, sit on the bench, and are tenured professors shows that there’s still lots to be done.”

At less than 20 percent female, Harvard Law School’s tenure-track faculty is the least diverse of its kind in the Ivy League. At Columbia Law School, about 25 percent of faculty members are female, while women make up about 29 percent of the faculty at Yale Law School. The law schools at Cornell and the University of Pennsylvania count even more female faculty members among their ranks, with percentages of about 30 and 33, respectively.

Outside the Ivy League, female law professors are represented in even greater numbers. According to a report released by the Association of American Law Schools, women accounted for 34.4 percent of law school faculty nationwide in the 2008-2009 academic year.

“In terms of our peer [top-ranked] schools we are not so different,” Minow said, noting that the Law School does not fare as well when compared to a broader group of schools. “So it’s again the same pattern you see all over the profession. The higher the prestige, the more elite, the fewer women are there.”

Since she took the helm of the school four years ago, Minow has worked to change these numbers. Her first step: hiring equal numbers of men and women for entry-level faculty positions since 2009. This year, the Law School has made two hiring offers, one to a man and one to a woman.

The goal of having more female faculty members is “very much part of the consciousness, and consciousness matters,” said Barron, a former Crimson president. “There’s no reason that our faculty should not be more diverse.”

Despite this progress, Field said that gender stereotypes still remain in the Law School’s hiring process.

“The more you present yourself as the old traditional type, the more likely you are to get in,” Field said.

Field said that “for [the faculty] to take you seriously, it’s nice to have a good male subject, what they think of as hard law subjects”—constitutional law­, for instance. She said female applicants fare better when presenting a “‘touchy-feely’ subject”—for example, family law or other “soft law” topics.

Others, including professor John F. Manning ’82, chair of the lateral hiring committee, contested Field’s characterization of the hiring process, saying that they do not see any correlation between the topic presented during the workshop and a candidate’s ability to be hired.

“Some of the most successful presentations I’ve had have been on subjects that have been regarded as sort of soft law,” said Law School professor Alan M. Dershowitz, who said that his own subjects were typically regarded as softer. “I welcome more people in those subjects.”

The Law School has also taken steps to accommodate faculty members—both male and female—who want to balance both their personal life and their professional careers.

Law School professor David B. Wilkins ’77, who is an expert on gender issues in the legal profession, said that an important obstacle to women’s success is the simultaneous timing, in many cases, of pursuing a tenure-track position and choosing to raise a family.

To this end, Harvard Law School offers a parental leave program and allows faculty members to extend the period necessary to be considered for tenure, Minow said.

“I’m a woman, I’m a mother,” she said. “It’s a priority for me to allow people to have meaningful lives, work, and family.”

For some professors like Jackson who have spent time at other law schools, Harvard’s gender disparity creates a distinct atmosphere around lunch tables and faculty workshops.

“For a variety of reasons, including the gender disparity, the faculty culture does have what I think scholars of this topic would describe as a masculine attitude, a way of presenting yourself and your arguments that has gender associations,” Law School professor Mark V. Tushnet ’67 said, adding that “assertive, outright statements” take precedence in faculty conversations.

Field said that as a result, engaging in faculty discussions becomes much more difficult for professors who are less outgoing.

“The first thing you have to learn how to do here is how to interrupt,” she said. “I think you’re considered smarter if you are showing off.”

Others, including Law School professor Jeannie Suk, disagreed, saying that they think the faculty environment is very accepting of female professors.

“On the treatment of women, there is no doubt that the experience of my generation—who began their academic careers in a law school with a female dean in a university with a female president—is likely very different from that of prior generations of HLS faculty,” Suk said. “I imagine those experiences would inevitably shape the individual views and perceptions of the faculty today.”

Some professors said that the gender imbalance impacts not only the tenor of the discussion, but also the topics of conversation and research.

“When I go to conferences, I hear about lots of topics that are quite interesting that you wouldn’t hear about here,” Field said, citing reproductive law as an example. “There are some major law schools that have these kinds of dynamic discussions all the time.”

Other professors take issue with this characterization, saying that the Law School accepts many points of view and supports many kinds of legal research.

“There’s a reason that Elena Kagan called it the ‘New York City of Law Schools,’” said Manning, the chair of the lateral hiring committee. “We have an incredibly intellectually diverse faculty that deals with a wide variety of research.”

Suk, who said she had never felt pushback on any of her own research, which includes fashion and family law, said she did not think there were any research topics that could not be pursued.

“I believe that on gender-related topics, HLS at this moment has one of the most alive, diverse, innovative and fascinating academic scenes imaginable,” she wrote in an email. “The environment is not ‘supportive’ of particular positions but rather of true exploration and difference on these topics.”

Still, Law School professor Christine Desan said that the impact of the gender disparity has an undeniable impact on faculty interactions.

“The faculty is now about 80 percent male. That’s a very different conversation than if you had 50 percent women at the table,” she said. “Day after day, I’m sitting at a table that’s 75 percent male, and that’s a different experience than if I sat with 50 percent. That does have an impact on the school and the environment.”