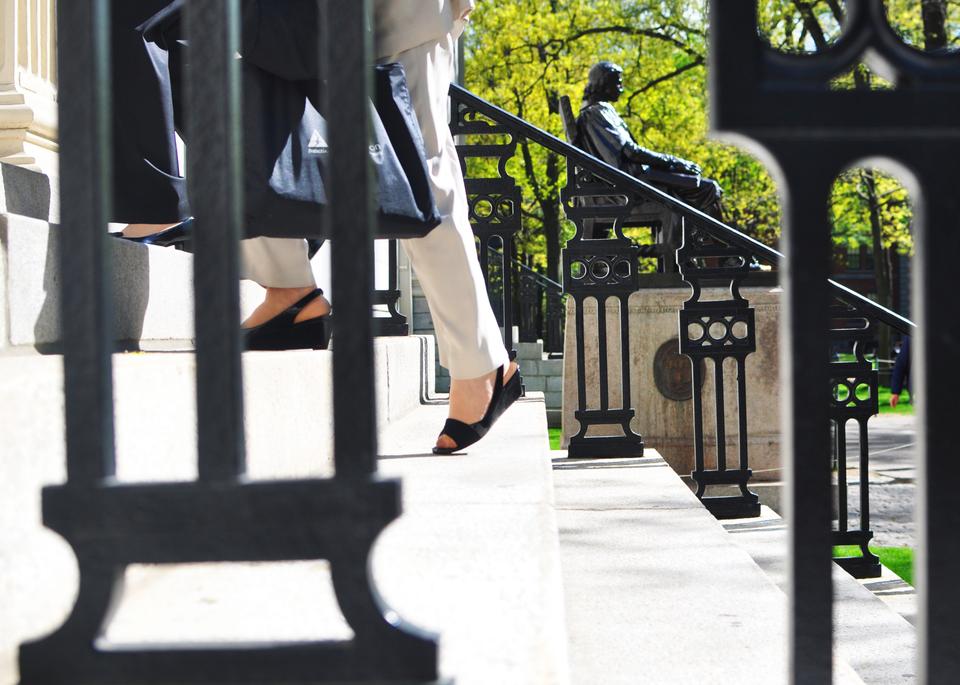 Faculty members ascend the steps of University Hall Tuesday afternoon to attend a meeting. Only listed members of the Harvard community and faculty members were allowed to sit in on the proceedings.
By Nicholas P. Fandos, Crimson Staff Writer

Gathered Tuesday for their final meeting of the semester, members of Harvard’s Faculty of Arts and Sciences complained that their voices are not being heard on a number of important issues affecting the University and the way it is governed.

In an hour-long discussion that touched on a variety of topics ranging from the expansion of HarvardX to development in Allston, frustrated professors questioned the consultative mechanisms currently in place and the degree to which administrators are willing to listen to the faculty.

“The common question that we all have is this: how effectively do the forums that we have available to us achieve the consultation and communication that we need?” said history professor and vice-chair of the Faculty Docket Committee Maya R. Jasanoff ’96, who initiated Tuesday's discussion.

The docketed exchange comes at the end of an academic year rife with administrative decisions that have angered faculty and left administrators, professors, and students struggling to communicate. But the unusual move to dedicate a portion of the faculty’s monthly meeting to the subject came only after news that administrators had authorized secret searches of resident deans’ email accounts—a revelation that intensified concerns about faculty-administration relations.

“I do believe that some of my colleagues, and this includes me, do feel that there may be a proliferation of members of the administration who are not members of the faculty,” history professor Alison Frank Johnson said at the meeting. “I think that may contribute to some of the alienation that some may feel—that we have a more corporate management structure than we used to.”

Faculty members said that structure, in which administrators often seem to outnumber faculty in the decision-making process, discourages their participation. Several professors noted the experience of sitting on or chairing committees whose recommendations are never really considered by administrators, while others pointed to the difficulty of substantively engaging with administrators during the highly structured faculty meetings.

“I would welcome us to consider the ways in which even consultation falls short of governance,” Johnson said.

Though the discussion was itself initiated by the Faculty Council, FAS’s only elected body, a number of professors suggested the Council is not serving its purpose as a mechanism to raise faculty concerns to deans.

But History of Art and Architecture professor Jeffrey F. Hamburger, a member of the Council, said the group has taken large strides in the past year to better represent the faculty as a whole. He alluded to Jasanoff’s point that the Council has helped facilitate a number of alternative discussion tools in the last semester, including town hall-style meetings and online discussion boards. If faculty members are dissatisfied with their relationship with administrators, he added, they need to do something about it.

“I think that we have to practice what we preach,” Hamburger said. “If we are concerned about communication, if we feel that no one loves us and nobody is listening, then we should take those opportunities we have to be heard.”

The conversation over Faculty Council quickly shifted to HarvardX, an initiative about which faculty said their opinions have largely been ignored. HarvardX is Harvard’s segment of EdX, an online learning platform launched by Harvard and MIT one year ago.

FAS Dean Michael D. Smith disagreed, saying that faculty have been included at various points along the way. The University, he said, is actively working with professors to determine how they can best use edX to complement their work.

“The world is moving in this way, and we should be part of this conversation because we are looked at as a leader in higher education and our voice matters,” Smith said, adding that the faculty has had and will continue to have chances to offer input.

But faculty pushed back, suggesting that they should have a hand in influencing not just the EdX curriculum but also its intellectual infrastructure. Philosophy professor Edward J. Hall, who serves as chair of the Committee on General Education, said that he hears from many professors worried about the implications of EdX.

“Within [certain groups] there is widespread concern about how HarvardX is proceeding,” Hall said. “And many of my colleagues notice that meetings happen that are devoted to implementing HarvardX, but not meetings where faculty are consulted.”

History professor Charles S. Maier ’60 echoed that concern, cautioning that although online education may be the model of the future, it still merits thoughtful consideration.

“These things may be taking place in the world, but my own sense is that there is a great fast train at the station, and we’re rushing to get on without knowing where it is going,” Maier said. “We might think about which train we want to take.”

Though the governance discussion took up nearly two-thirds of the meeting, faculty did vote to approve a number of procedural proposals, including new rules in the Handbook for Students that would change the way reading and exam periods work. Beginning in 2014, Reading Period will be shortened and all final papers and projects will be due during the newly named Final Project and Examination Period.

Tuesday’s meeting was the last regularly scheduled faculty meeting of the year.

This article has been revised to reflect the following clarification and correction:

An earlier version of this article stated that History of Art and Architecture professor Jeffrey F. Hamburger quickly refuted the claim that the Faculty Council is not serving its purpose as a mechanism to raise faculty concerns to administrators. To clarify, Hamburger did not directly refute this claim.

An earlier version of this article incorrectly stated that Hamburger enumerated several alternative discussion tools recently facilitated by the Council. In fact, Hamburger alluded to comments made by history professor and vice-chair of the Faculty Docket Committee Maya R. Jasanoff ’96.