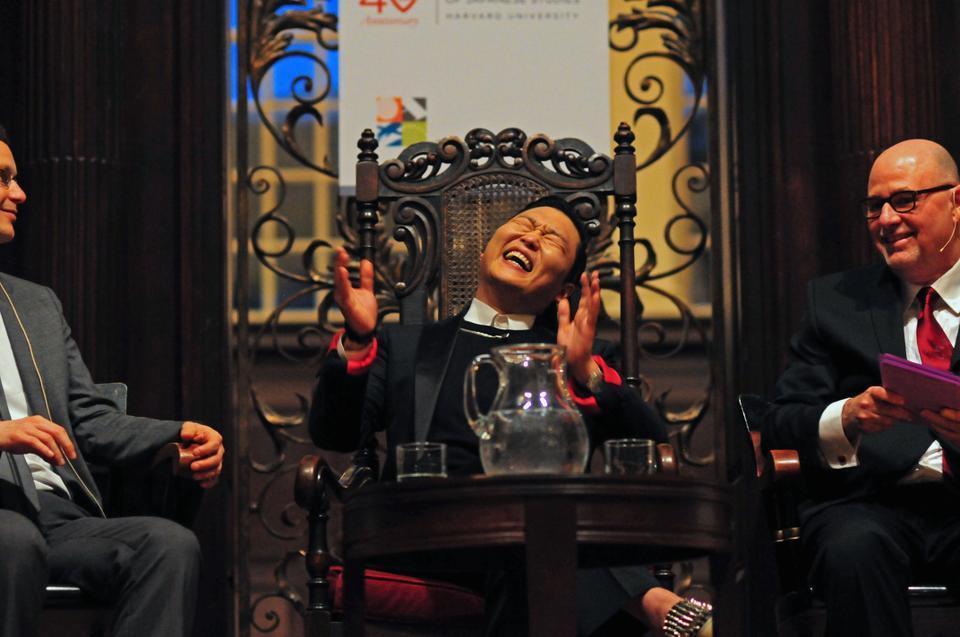 Korean pop star, Psy, visits Harvard on Thursday night. The singer, famous for his YouTube hit "Gangnam Style" which has over one billion views, spoke about his worldwide rise to fame, and his future goals for his career. He entertainted the audience with occasional dance moves and humorous stories.
By Elizabeth S. Auritt, Crimson Staff Writer

Speaking off the cuff to a packed crowd in Memorial Church Thursday evening, Korean pop sensation Psy remarked on how strange it was to be giving a talk at Harvard.

Psy, who studied at Boston University and later Berklee College of Music in the 1990s, said that despite his proximity to Harvard, the University felt a universe away during his college days.

“After 14 years, who knew I came back to Boston give a speech in Harvard?” he said. “Isn’t life beautiful?”

Psy’s self-effacing humor shone through Thursday as he treated ticketholders to candid reflections, a free Korean meal, and a discussion of his unexpected success in the American music market. Sporting his signature black suit and sunglasses, Psy said he chose not to use a script for his speech, much to the surprise of event planners, because he wanted to give attendees an informal account of his life experiences.

“I’m not here to make something academic or educational,” he said.

In one humorous anecdote, the Seoul native recounted coming down with a terrible case of diarrhea and struggling to communicate with a pharmacist during his second full day as a college student in the United States.

Psy also reflected on “Gangnam Style,”­ the hit 2012 pop song that has since made him famous in America. He said that his intention when making the song was to cheer people up during a time of worldwide economic downturn.

“I really tried my best to be as ridiculous as possible,” he said.

Alexander Zahlten, an assistant professor of East Asian Languages and Civilizations, introduced Psy at the Korea Institute-sponsored event. Zahlten said that the fact that Psy’s “Gangnam Style” music video can be easily imitated and parodied by the public has been crucial to its success.

For his part, Psy offered another explanation for why his Korean music has achieved so much popularity among English speakers despite the language barrier.

“I think there was something beyond the language,” he said. “I think it’s fun. The word fun. All the people around the world, we like fun.”

Attendees at the event came dressed for the occasion, donning sunglasses in imitation of the pop star’s signature shades. One student even wore a horse mask in reference to Psy’s wildly popular music video for “Gangnam Style,” which broke the all-time record for most views on YouTube.

Students in attendance at the event commented on Psy’s good sense of humor and ability to work a crowd.

To thank students for coming to hear him speak on the night before the College’s first official day of exams, Psy provided attendees with boxed dinners from Korean restaurant chain Bibigo upon exiting the church.