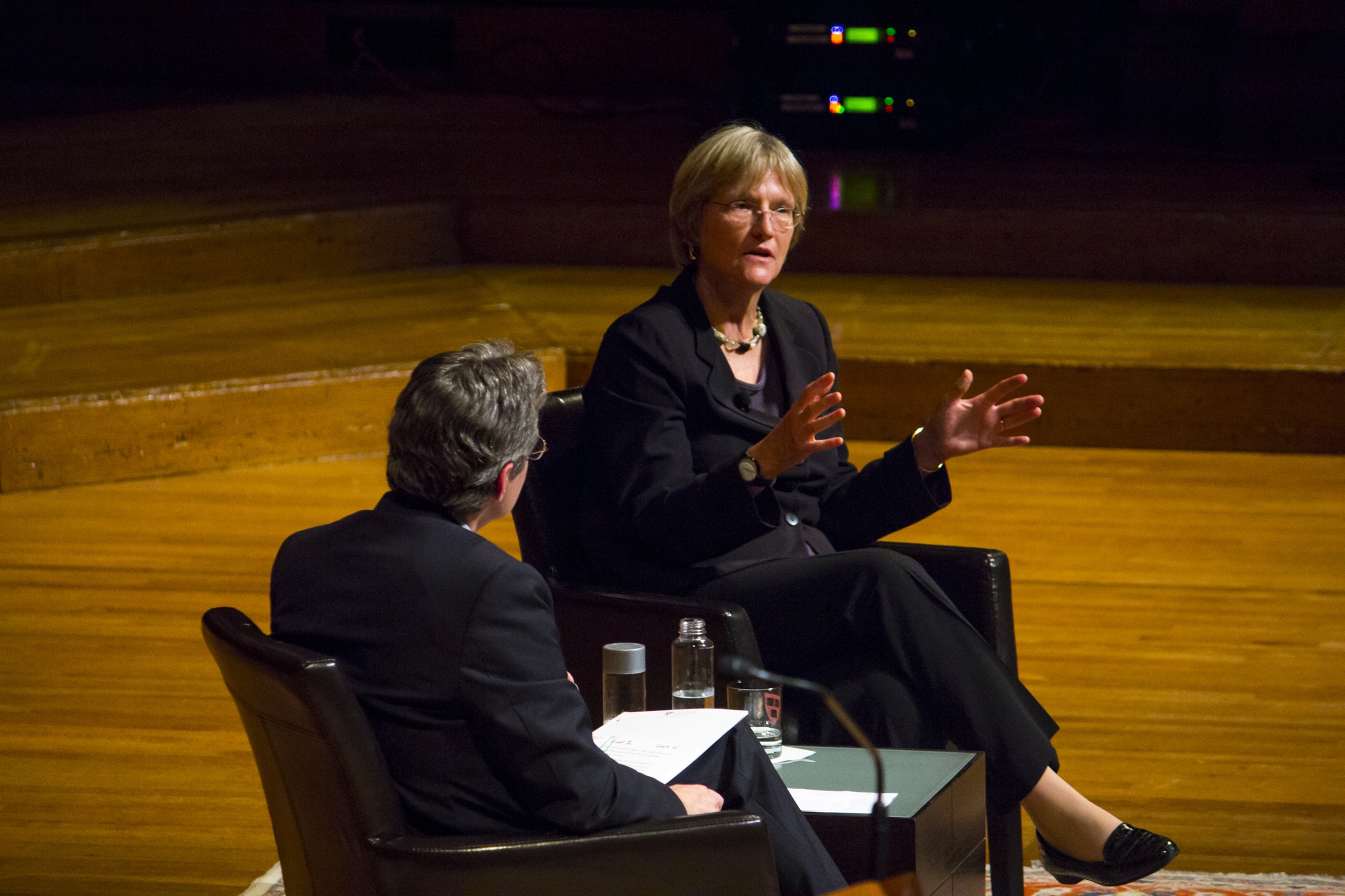 University President Drew G. Faust talks about the state of the University in September 2013 and what the upcoming Harvard Campaign to raise funds can achieve.
By Nikita Kansra and Samuel Y. Weinstock, Crimson Staff Writers

In an address to a range of members of the Harvard community in Sanders Theatre on Tuesday afternoon, University President Drew G. Faust conveyed a mixed outlook for higher education, describing both the challenges and opportunities facing Harvard.

Citing the strained financial climate—manifested in the University’s projected budget deficit, curtailed federal funding, and heightened global competition—Faust stressed that Harvard’s upcoming capital campaign would not serve as a “panacea” to these problems. The fundraising effort, named The Harvard Campaign, is set to launch on Sept. 21.

Faust’s speech, delivered as an opening-of-the-year address, was followed by a question-and-answer session, which lasted around 30 minutes.

Herman “Dutch” B. Leonard ’74, a professor at the Kennedy School and the Business School, served as master of ceremonies, introducing Faust as a President who optimistically asks, ”Why not?,” especially when it comes to the oft-repeated ideal of “One Harvard.”

But in her speech, Faust spent at least as much time discussing challenges and limitations—particularly those of a financial nature—as she did progress.

“American higher education is undergoing seismic shifts,” she said. “And Harvard is not immune.”

One of the obstacles she named was declining levels of federal funding for academic research, a trend that she has spoken about before and lobbied against in Congress.

These financial aid increases, she said, combined with escalating costs, redundancies across the University, and high dependence on the endowment, have resulted in barely balanced budgets in recent years and the projection of a budget deficit this year.

“When markets and the endowment were booming, Harvard had a greater margin for error,” she said. “We didn’t need to aggressively seek out new and nontraditional sources of revenue. But those days are gone.”

Faust also pointed out that despite some people’s belief to the contrary, Harvard’s $31 billion endowment—the largest of any university in the world—is not a checking account that can be used at will.

“Don’t I wish?” she joked, drawing laughter from the audience.

Following the address, Faust sat down for a conversation with Leonard, who asked her questions, most of which were collected both by emailed and handwritten submissions from audience members.

While some inquired about Faust’s personal opinions and experiences, others asked more pointed questions. For instance, one audience member asked why engineering masters students do not receive financial aid. Faust answered that while Harvard has seen progress in assisting undergraduates, work remains in the graduate schools—and noted that The Harvard Campaign would have a role in making increased access to financial aid a reality.

When Leonard asked Faust about her legacy, she said she hoped that people would look back on Harvard as having “sailed through these stormy seas” while maintaining its values, such as inclusiveness and broad intellectual inquiry.

In an interview with The Crimson on Monday, Faust said she wanted to put forth a “realistic and somewhat sober picture of higher education” in her speech, “with a hope of communicating to the faculty, staff, and students at Harvard how our responsibility must be focused on making choices in this environment and not simply letting the environment happen to us.”

That environment, Faust explained in both the interview and her speech, is unprecedented in countless ways.

“I think higher education is being transformed more rapidly than certainly any time in my lifetime, and perhaps as rapidly as it has ever been asked to change in all of its existence,” she told The Crimson on Monday.

With less than two weeks before the public launch of The Harvard Campaign, which is expected to set fundraising records, Faust painted Tuesday’s speech as partially an attempt to explain the Campaign’s context.

“The Campaign is an important element as a response and way of dealing with these issues—but it is only one element,” she said.

After Faust’s speech and discussion, a celebration on the Science Center plaza included song and dance performances, as well as food-truck samples and other refreshments. After Faust nearly filled Sanders Theater, the prospect of free food packed the plaza, drawing hundreds of speechgoers and non-speechgoers alike.