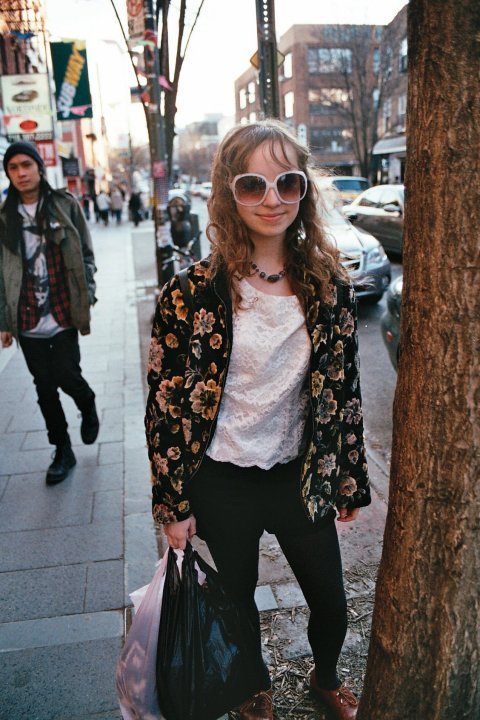 How Someone Else's Velvet Jacket Got Me Rejected From Yale

It was a chilly Sunday in March during my sophomore year of high school. That Sunday was one of those days when you know you should still be in jackets and boots, but the promise of spring is so enticing that you brave the wind in just a cardigan. My friend Orly and I boarded the E train from Queens with only vague directions in mind on how to get to Williamsburg. Forty-five minutes and two boroughs later, we emerged from the L train onto Bedford Avenue in Brooklyn.
By Olivia M. Munk

I distinctly remember the first day I ever went shopping for second-hand clothes. “Thrifting,” if you will.

It was a chilly Sunday in March during my sophomore year of high school. That Sunday was one of those days when you know you should still be in jackets and boots, but the promise of spring is so enticing that you brave the wind in just a cardigan. My friend Orly and I boarded the E train from Queens with only vague directions in mind on how to get to Williamsburg. Forty-five minutes and two boroughs later, we emerged from the L train onto Bedford Avenue in Brooklyn.

Beacon’s Closet, our thrifting destination that day, is nestled in a massive warehouse along the East River, just overlooking Manhattan. Thin women in expensive sunglasses carrying pink plastic bags (emblazoned with what I assumed to be a cartoon of Beacon himself) slipped by as we climbed the grated stairs into the store. When Orly suggested we try this particular venue as our first venture away from shopping malls, I had pictured a quaint consignment shop with a few well-worn garments (all within my budget, of course).

I was wrong. The Beacon’s in Williamsburg occupies 5,500 square feet and is entirely organized by color—racks of only black shirts, topped with varying shoes of the same shade, are contrasted by a crimson conglomeration in an opposite corner. Women move around from color to color as if it was their purpose in life to navigate this rainbow labyrinth. I was overwhelmed.

I gingerly made my way over to a stand slung with jackets and flipped through a few. I found some pill-ridden sweaters and giant leather jackets before coming upon The Jacket. The Jacket was made of velvet and had plush quilt lining. The Jacket’s exterior had textured pastel flowers contrasted by a black background. The Jacket was four sizes too big and $22. The Jacket was destiny.

We departed the store an hour later, both clutching pink plastic bags containing our spoils. When I arrived home and proudly displayed my bargains to my parents, they were a little grossed out that I had bought someone’s old jacket, but admitted it was nice and offered to dry clean it. The way they saw it, kids my age spent all their money on makeup or weed or sneakers, so if their daughter saw one man’s trash as her own fashionable treasure, who were they to stop me?

That first Sunday trip to Beacon’s led to another one the next weekend, followed by more exploring of various second-hand stores in Brooklyn. I became addicted to the bargains. If anyone complimented my clothing, instead of simply thanking them, I’d proudly proffer its low price. Accompanied by girls from our grade who were already adept at second-hand shopping or were eager to stretch their allowance, Orly and I scoured stores across Manhattan and Brooklyn in search of the most clothes for the least amount of money.

There used to be an anti-drug commercial on TV where a dad pulls a wacky tie out of his closet and contemplates telling his children he bought it when he was high; I’m not sure whether I’ll be proud or depressed to show my children floral crop tops (whose shoulder pads I have unceremoniously ripped out) that I bought in a cheap sartorial frenzy. For now, let’s go with proud.

Thrifting became my bona-fide hobby. I knew to stop by a certain store in the East Village on Thursdays because they offered 15 percent off with a student ID. I knew which branch of Buffalo Exchange, another second-hand sales chain, would buy old Urban Outfitters dresses I had outgrown. I would immediately take the store credit and shop in the same establishment, happily heading home with an exponential new amount of clothing.

But like many things in life, too much of a good thing can become a problem. I was in a fancy law office in Midtown Manhattan, being interviewed for my application to Yale by an alum. In our conversation-cum-interrogation, she asked towards the end what I did in my spare time. Before I knew what I was doing, I blurted out that I loved to thrift, and I usually did so whenever I had a free afternoon.

In the moments before my interviewer responded, my heart fell to my vintage shoes. I blew it. Yale didn’t want vapid shoppers. It wanted young ladies in clean new clothing, like the stylish Anne Taylor pantsuit this woman had on. I should have told them I simultaneously read Proust while feeding the hungry.

She appraised me for a moment. Then: “I LOVE to go thrifting. Where do you go? I usually go to this flea market in Hell’s Kitchen on the weekend, the prices are great.” We spent the next 30 minutes discussing our usual haunts. I told her about The Jacket and how I got sucked into the thrifting phenomenon, and I left her with a list of my favorite stores.

Unfortunately, the admissions board didn’t share my interviewer’s enthusiasm, and I was not offered admission to Yale. But when I emailed my interviewer to let her know I’d be attending Harvard, she offered to grab coffee the next time I was in the city to thrift. You win some, you lose some.

I spent my freshman year of college trying to stop my massive wardrobe from encroaching on my roommate’s side of the closet, and realized it was time to downsize. When I got home, I packed my mom’s car with every item of clothing I hadn’t worn in months, drove back to the Beacon’s where my habit had begun, and sold it all back. It took every ounce of my will to accept the $57 in cash rather than $130 in store credit, especially surrounded by the tempting rainbow labyrinth.

All, that is, except for The Jacket.

Olivia M. Munk ’16 is an English Concentrator in Leverett House. She wears her granddad’s clothes, and looks incredible.