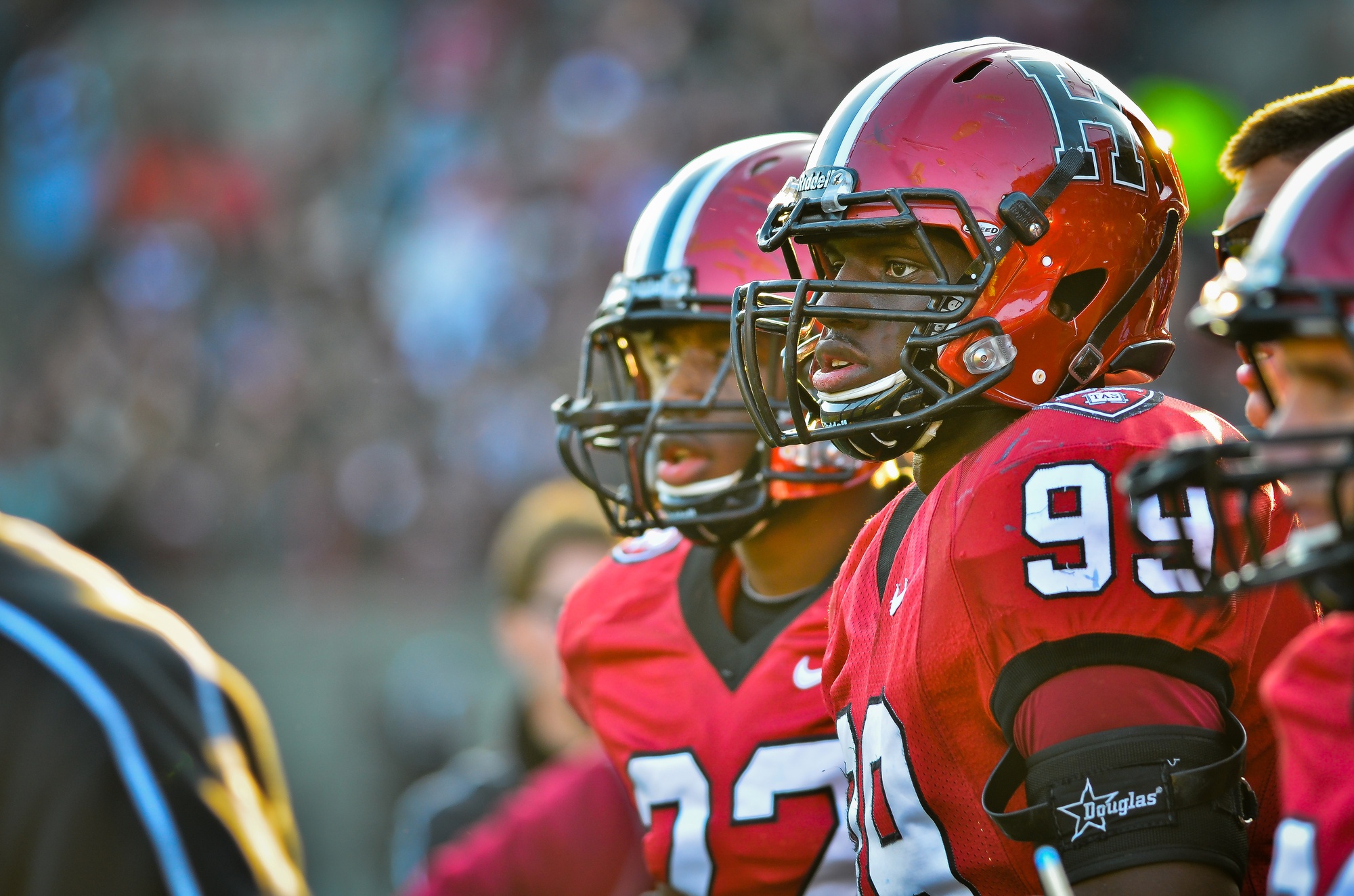 Crimson defensive end Zack Hodges signed with the Indianapolis Colts after he did not hear his name called at the NFL draft. By Shunella Grace Lumas
By Samantha Lin, Crimson Staff Writer

It’s been over 30 years since the Harvard football team has flown to play a game, but that drought is about to end. On the current squad’s first-ever flying road trip, the Crimson will board the plane to San Diego, where it will open its season against the Toreros on their home turf.

The meeting between the two teams will be just the second ever. In last year’s contest, Harvard fashioned a fourth-quarter comeback against San Diego to hold the sole victory of the series, 28-13.

Then the Harvard offense turned on the engines, showing why it was the Ancient Eight’s most prolific squad in the 2012 season. The Crimson scored 21 unanswered points, beginning with a strike from quarterback Colton Chapple to tight end Kyle Juszczyk and ending with two scoring runs from tailback Treavor Scales.

But when the team faces San Diego this year, it will be doing so without Chapple, Juszczyk, and Scales, each a key element in last year’s firepower offense.

After a preseason competition during which he edged out senior Michael Pruneau, junior quarterback Conner Hempel will line up under center Saturday to start his first game for Harvard. Sophomore running backs Paul Stanton, who backed up Scales last year, and Zach Boden look to fill the gap left by Scales, who led the league in touchdowns in 2012.

The receiving corps has lost Juszczyk—now with the Baltimore Ravens—but Murphy is confident this year’s group will pick up any slack despite having a relatively inexperienced quarterback.

“In the end, to some extent, the offense and the quarterback is only as good as the guys around him, so while that may seem a question, we’ve got a couple of good running backs, we feel,” coach Tim Murphy said. “I feel like we’ve got two-deep at the receiver position. At tight end, [we have] guys like Cam Brate, wide receiver guys like Andrew Berg, Ricky Zorn, Seitu Smith, Andrew Fischer. So we feel like the pieces of the puzzle are there, we just have to put them together.”

On the other side of the ball, junior defensive end Zach Hodges and senior defensive tackle Nnamdi Obukwelu will lead the defense against Mills, who threw for over 350 yards passing and set a school record for pass completions in last year’s contest.

The loss of players like former captain John Lyon and Grant Sickle opens the door for more inexperienced defensive linemen like sophomore Dan Moody and junior Obum Obukwelu, but also raises questions about the line that boasted the Ivy’s League’s top rushing defense in 2012.

The Toreros will be playing their third game of the season. But to make up for the disparity in playing time, Harvard has been playing an increased number of inter and intrasquad scrimmages to prepare for the season-opener.

“Coach Murphy, he’s a genius. He has a system in place where we try to match the number of games they play through scrimmages,” Nnamdi Obukwelu said. “We try to make our scrimmages game tempo, game environment to make sure guys are acclimated to the whole environment of playing in a game. So by the time we get to our first game we’re kind of even keeled almost, not sort of behind them in terms of conditioning or mental toughness.”

San Diego is holding on to a 13-game home winning streak and is coming off of its first victory of the season, but Hempel is confident that the team will be ready come Saturday afternoon.

“They have some type of alumni reunion coming back for the game, and that’s a pretty long home streak without a loss, so it’s going to be a tough game,” Hempel said. “But I think we’ve prepared well these two weeks and all preseason, and we’ve made big strides this week, so I think we’ll be prepared for a good game.”