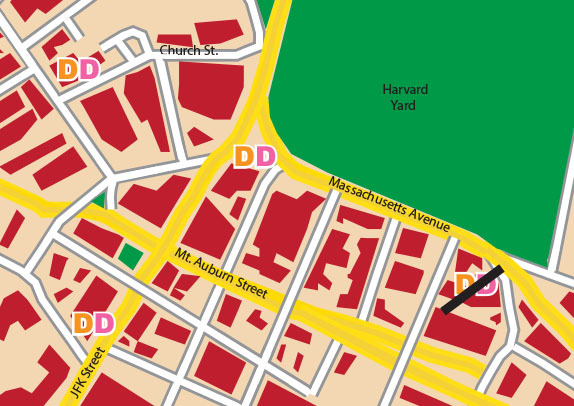 There are currently four Dunkin’ Donuts locations near Harvard Square. According to the Dunkin’ Donuts franchise owner David G. Carvalho, the location on Massachusetts Ave. will close on Sept. 26.
By Nikki D. Erlick, Crimson Staff Writer

The Dunkin’ Donuts window where Matt Damon slammed a phone number and asked, “How do you like them apples?” will no longer house the coffee chain. The joint Dunkin’ Donuts and Baskin Robbins store at the corner of Bow St. and Mass. Ave—noted for being featured in the 1998 film “Good Will Hunting”—is set to close next week.

“Dunkin’ Donuts at 1 Bow St. in Cambridge will close on Thursday, September 26, as we are in the process of looking for a new location,” the franchise’s owner David G. Carvalho wrote in an email to The Crimson.

“All crew members will be transferred to three other Dunkin’ Donuts stores in Harvard Square located at 65 JFK St., 61 Church St., and inside of the Harvard Square MBTA train station,” he wrote.

For students who frequented the shop at 1230 Mass. Ave, the closure signals the loss of a convenient cup of coffee and donuts along with 31 flavors of ice cream.

“It’s very upsetting just because I’m in there at least once a day to the point where the people behind the counter know my order,” Joe R. Mazur ’15 said, adding that the Dunkin’ Donuts is “a staple in the morning class culture at Harvard.”

He said one of the store’s employees told him that the owners “decided it wasn’t worth the lease” to keep the location open.

Although the store is survived by three other Dunkin’ Donuts in Harvard Square, Mazur said the inconvenience of the remaining locations compared to Bow Street may be a deterrent to loyal Dunkin’ patrons, particularly among the student body.

Matthew R. Shuham ’15 said the coffee shop was “almost like a second home.”

Shuham said the store attracted a mix of Cambridge residents, police officers, and Harvard students, particularly from nearby Houses like Leverett, Dunster, and Dewolfe.

Dunkin’ Donuts has shared the Bow Street property with several companies since it first opened at the location in 1971. While occupying the space with the Bow and Arrow Pub in January 2000, the store faced the threat of closure when IDM Inc., the development company controlling the property, wanted to limit the lease to a single occupant.

The shop closed in August that year to allow for renovations to the building, which was operated by the Harvard Cooperative Society. The combination of Dunkin’ Donuts and Baskin Robbins then reopened in September 2003, but after 10-years of partnering coffee and ice cream, both retailers will leave the location.

The lease of the 2,425-square-foot location, which expired this year, is currently being sold by Colliers International.