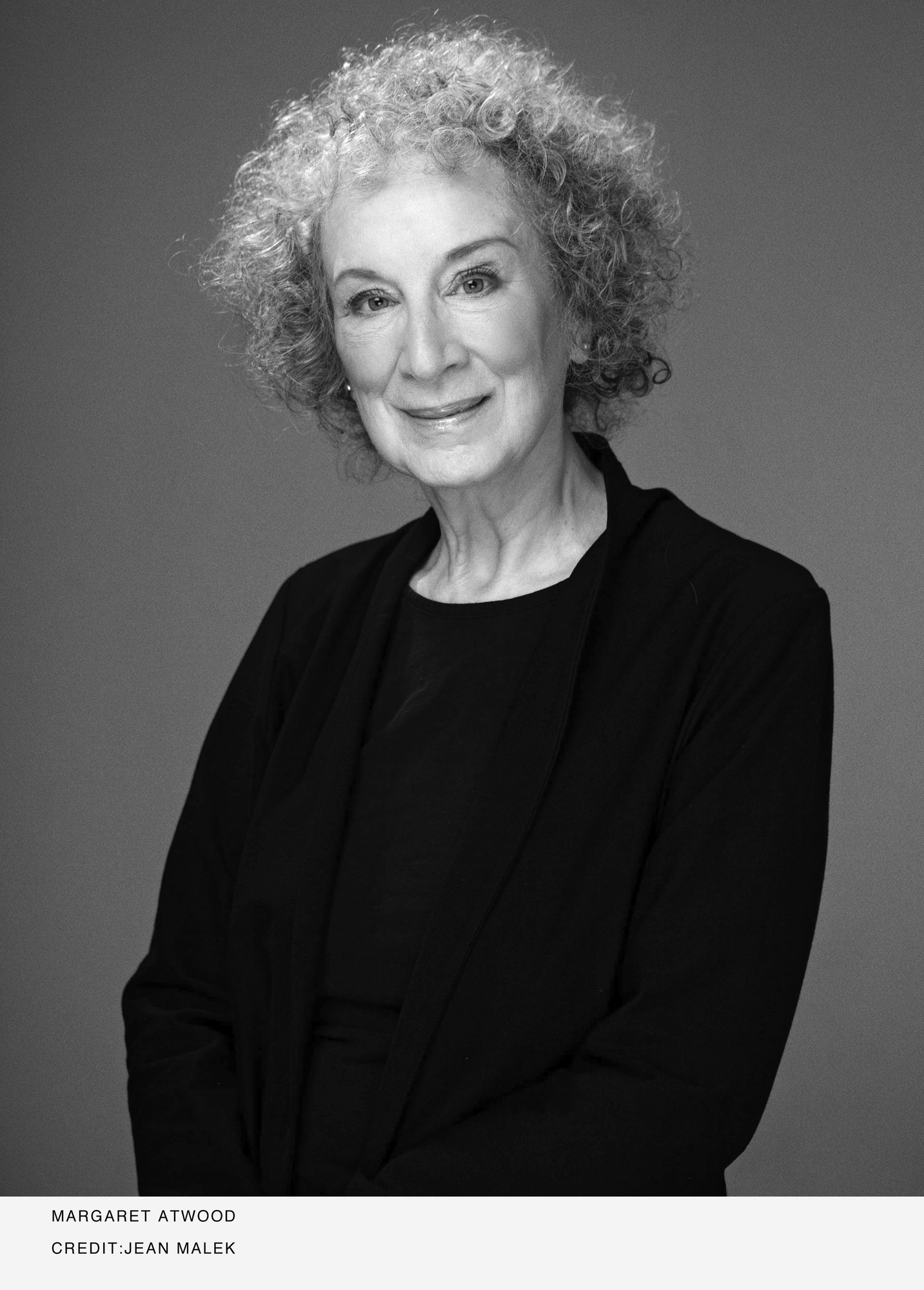 Margaret Atwood takes her seat behind a desk in a back room of First Parish Church. She has 30 minutes until her sold-out Harvard Book Store reading—and hundreds of books to transform into retail-ready Signed Copies before she can begin. She gets to work.
By Rebecca M. Panovka

Margaret Atwood takes her seat behind a desk in a back room of First Parish Church. She has 30 minutes until her sold-out Harvard Book Store reading—and hundreds of books to transform into retail-ready Signed Copies before she can begin. She gets to work.

Atwood is on a book tour to promote "MaddAddam," the newest and last installment of the dystopian trilogy of the same name. Following "Oryx and Crake" (2003) and "The Year of the Flood" (2009), "MaddAddam" portrays a world in which humans are all but extinct after a biochemical apocalypse. In an effort to halt the evils perpetrated by humanity, a young scientist has bioengineered Crakers, genetically improved humanoids, and released a plague to rid the earth of the old, corrupt human species. Along with the Crakers, a few humans have survived, and MaddAddam chronicles their efforts to rebuild and to shape a narrative for their new beginning. Atwood calls the trilogy speculative fiction—a pessimistic vision of the future that is entirely possible given current technological advances.

The author of "The Handmaid’s Tale" and "The Blind Assassin," Atwood is the recipient of the Booker Prize, two Governor General’s Awards, the Giller Prize, and numerous international awards. She has over 50 titles of poetry, fiction, criticism, and children’s books to her name.

And it shows. Back at First Parish Church, Atwood is autographing with the easy focus and composure of a book tour veteran; it’s all muscle memory. Flanked by assistants (one from the bookstore, one from her publisher) removing each book, opening the next to its title page, and placing it in front of her—assembly line style—Atwood scribbles away, too efficient to lift her pen between her first and last names. She glances up to greet me, asks if I have a recording device, and returns her gaze to the piles of unsigned books in front of her. As Atwood and her entourage repeat their collective motion (sign, remove, replace), we start to talk.

1. FM: "MaddAddam" has a Biblical tone and is filled with Biblical allusions—we hear about the Year of the Flood, a new beginning of mankind, God’s Gardeners—but at the same time a religious institution, the church of PetrOleum, is implicated as a central source of corruption. Why did you decide to use religion in those ways?

MA: Because it’s there. Why would I not? Religion is a human subset of narrative and language.

MA: Think about it one second. If you have language which includes a past tense, you’re going to sooner or later say, “Where did I come from?” And then sooner or later you’re going to end up with an origin story of some kind. We have various origin stories with us today. One of them goes, “In the beginning...” etc. One of them goes “in the beginning there was a big bang.” And then it goes, “And what came before the big bang?” and the answer is, “A singularity.” And then the question is, “What is a singularity?” And the answer is, “I don’t know.” So sooner or later with any of those stories, whether they include a divine being or not, you’re gonna get to “I don’t know.” When you have a group of people like the Crakers who have language but do not have a built-in origin story that they’ve always known, they’re going to start asking, “Where did we come from?” And the origin story therefore is provided for them in a way that they can feel happy about.

3. FM: But "MaddAddam" isn’t just an origin story; it’s also a story of the end of the human world.

MA: Yes. Why are we so stuck on endings? You know, every single eschatology that we know anything about has got a beginning and an ending. Most of them have got an ending followed by another beginning. In fact, name one that doesn’t… That just seems to be part of our mindset—that we cannot seem to imagine a world without us. It’s like people saying, “What are you going to have at your funeral?” “Well I’m going to have—” Hey, hello-o! You’re gonna be dead! But that’s how we think, and even when you say, “I will be dead,” you’re still telling a story about yourself in the future in which “I” still exists. It’s very, very hard to imagine a universe without yourself, just as it’s very hard to imagine a universe without people.

So why do we keep doing the end of the world? Because we’ve done it in one mythology after another. And we’re seeing reiteration. Because we have a language that provides us with not only a past tense but a future tense. And it’s the same problem—does it just keep going on and on and on? Well, where’s the end? And we do seem to have that hankering for the end, but not really the end, because there’s always a catch. Just as there’s always an “I don’t know” before the big bang, there’s always an “I don’t know” after the end of the world. We like it that way.

4. FM: "MaddAddam" follows current trends in science and society to a catastrophic conclusion. Do you write in part to warn us?

MA: Do you feel right to be warned?

5. FM: So when you play with political undertones—

7. FM: Do you think activism—environmentalism, feminism, liberalism—plays a large role in your writing?

MA: Oh you mean, “Do I write books for that reason?” No. I write books ‘cause I’m a writer. That’s what I do. When people asked Samuel Beckett why he wrote his books he said the following: “Not good for anything else.” Do I write stories in order to deliver messages? No. If all I wanted to do was deliver messages, I would rent a billboard, write some tracts, and distribute them on sidewalks. Do political things get into my books? Yes. Why is that? Because they’re there in real life… It’s very hard to describe a life, a day in the life of anyone in which they’re not coming across some piece of news that is connected with what we call “politics” but what I would call “power structures.”

8. FM: “MaddAddam” takes its title from a character in an online game, and online gaming and online pornography are central to the series.

MA: I have to practice. You can play it on a touchscreen. So it has a graphic novel frame which gives you a plot, and then it gives you the part where in the course of stealing the bioforms from the HelthWyzer Lab on behalf of Maddaddam the organization, you get infected. So they’re doing one organ at a time, and right now it’s the lungs. And they show you the lungs with the things in them that you have to get rid of, and then you get two pills too, and you have to trace the pill along until it explodes the thing. And there’s a little red cross up at the top that’s slowly draining, and when it drains and isn’t red anymore, that’s your “Time Up.” And then if you fail, this thing that comes up. It says, “You have died.”

So I have to practice. I’ve only got to level three on the lungs, and then once I get through the lungs they’re gonna do the next organ, and the final one they’re going to end up in is the brain. So I think I’m gonna become much more dexterous through doing this game.

10. FM: Why did you decide to integrate online culture into the book?

MA: It’s in people’s lives. It’s in your life, unless you’re a hermit.

11. FM: And you’re quite active online too, right?

12. FM: I didn’t see how many followers you had, but I did look at your Twitter account.

MA: You looked! You peeked! You peeked! How did [my Twitter account] happen? By mistake. I was building a website in 2009, and people said, “Uh, you need a Twitter,” and I said, “What’s that?” And they said, “Well, it’s like this.” So all of a sudden, then, I have all these followers.

13. FM: You went to graduate school here at Radcliffe and Harvard when Harvard was just beginning to admit female grad students officially. What was it like? Did you encounter a lot of sexism?

I think my friend Ilsa had a bit of trouble because she was a flamboyant person from Latvia who had red petticoats and I think she was drawn aside and told she had to dress more appropriately.

Sexism. I think actually it took a positive form for female graduate students at Harvard because the Harvard English department did not hire women, and the spin off from that was that female students had a much easier time during their orals because they weren’t the competition. They were gonna go off and be somewhere else, whereas the male ones were potentially serious business. So I just kind of diddled through my orals.

The other piece of sexism that was very useful to me was that women were not allowed into the Lamont Library where the modern poetry was. So that was unpleasant. But on the other hand, it meant that I spent a lot of time in the Widener stacks, where somebody had made a little collection of Canadian Literature which was right next to the Witchcraft and Demonology—so two of my interests were just right there, side by side.

The other kind of sexism was pretty normal, which was: I lived in a women’s graduate residence, and it was covered with peeping toms, like barnacles. Stuck all over.

14. FM: "The Handmaid’s Tale" is set in a dystopian Cambridge.

MA: Because I never believe anyone who says, “It can’t happen here.” And people think of Harvard as the home of liberal democracy, but in fact in the 17th century it was the home of a theocracy, so I thought it would be salutary to set it here, and anyway it was funny. Harvard was not originally amused by it. They were not amused by the bodies hanging on the Harvard wall. They were a bit sniffy about it when they reviewed it. They’ve come 'round. They’ve come 'round.