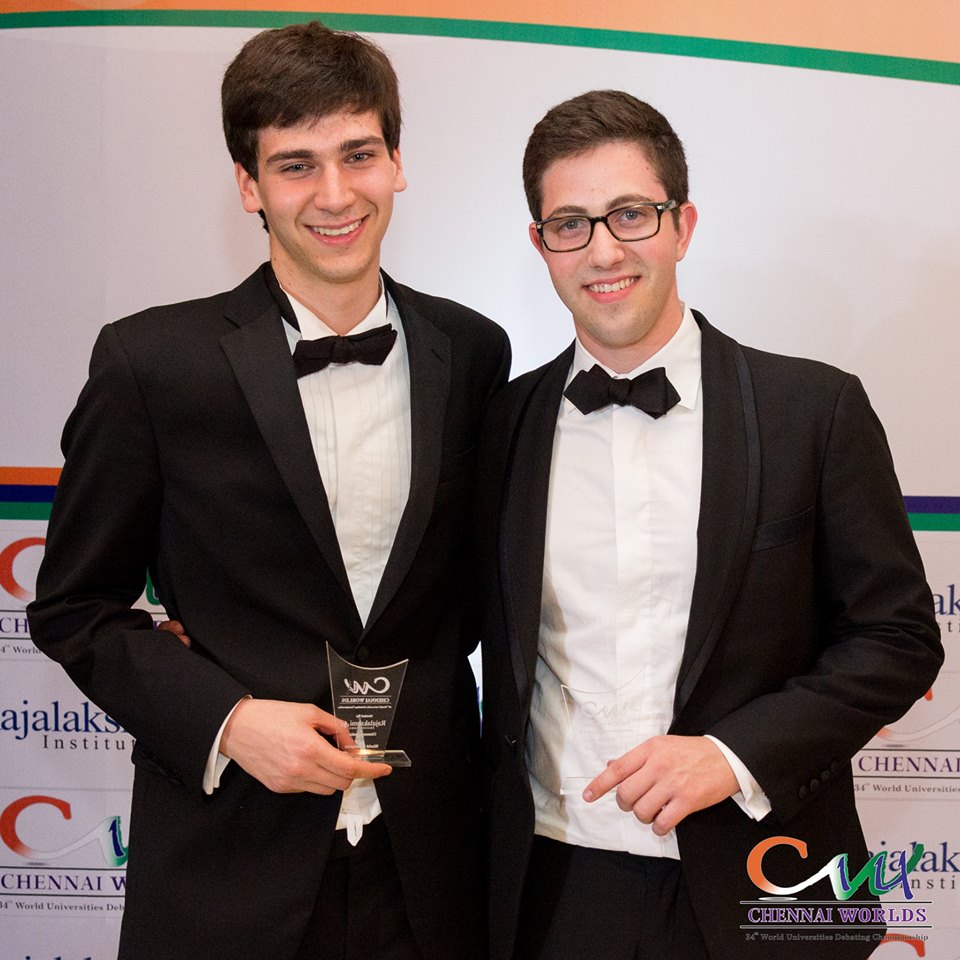 Students from over 300 universities competed in the prestigious international tournament, which is hosted annually by the World Universities Debating Council and was held in Chennai, India from Dec. 28 to Jan. 3.

Zoffer and Sprung-Keyser won after debating the adoption of “radical free-market policies” in the final round of the contest.

“When we heard the topic, we were ecstatic,” Zoffer, who was still out of the country, wrote in an email to The Crimson.

“Economics is their turf,” said Cormac A. Early ’09, a former Harvard debater who helped train the team. “It’s almost like they had home-field advantage.”

Sprung-Keyser, an economics concentrator, had recently researched Indian labor markets, and Zoffer studies economic history. In the final debate, they discussed labor market reforms, foreign direct investment, and the privatization of state-owned enterprises, among other issues.

“We were happy that we got to talk about something we really care about,” Sprung-Keyser said.

Tournament participants compete in the British parliamentary debate format, which, according to the team’s coach and Kennedy School student Julia L. Fetherston, differs vastly from formats popular in the United States.

“Preparing a team for Worlds is like helping an NFL player switch to soccer or rugby—within six months,” she said.

Contestants are assigned topics fifteen minutes before debate begins, and according to Fetherston, this year’s tournament featured topics that ranged from cosmetic surgery to drug policy. The diversity of possible topics, she said, demands “a wide general knowledge that makes the format particularly challenging—and the wonderful performances even more impressive.”

They also brought in former debaters like Early, who had competed at Worlds four times and reached the final round twice, for practice rounds. Early, a former Crimson editorial editor, said that he advised the duo “to be a little more relaxed when speaking and to dig deeper” into important arguments.

Fetherston said Sprung-Keyser and Zoffer had focused particularly on improving their performance in the “opening government” position, which entails speaking first and arguing in favor of the given motion. They were assigned to this position in the final round.

Though their formal preparation for Worlds spanned a year, both Sprung-Keyser and Zoffer said that their preparation truly commenced several years ago, when they began their debate careers.

While Sprung-Keyser, whose father was a former Harvard debater, began debating in elementary school, Zoffer started debate as a freshman in high school.

“My parents got a note home about it and thought it was the perfect activity for a very argumentative fourteen-year-old,” Zoffer said.

Both debaters attribute a large part of their success to their team dynamic.

“We debate very similarly, and when it comes to competition we click extraordinarily well,” Sprung-Keyser said. “We complement each other in a technical way. Josh’s job is specific argument generation, while I focus on the strategy of the round as a whole.”

Zoffer added that he and Sprung-Keyser are “incredibly close as partners and friends,” a quality important for this style of tournament.

“Winning a tournament like Worlds requires being with your partner almost 24/7 for five days, so it’s an intense emotional experience that requires a strong bond,” he said.

The world champions both described earning the title as a “surreal” experience.

“Even if you have the skill and potential, you need so much help along the way, and Josh and I are extremely lucky in that regard. We’ve had the support of phenomenal coaches, former Harvard debaters, and teammates,” Sprung-Keyser said.

“We’re really happy and proud to bring the championship to Harvard—and really humbled.”