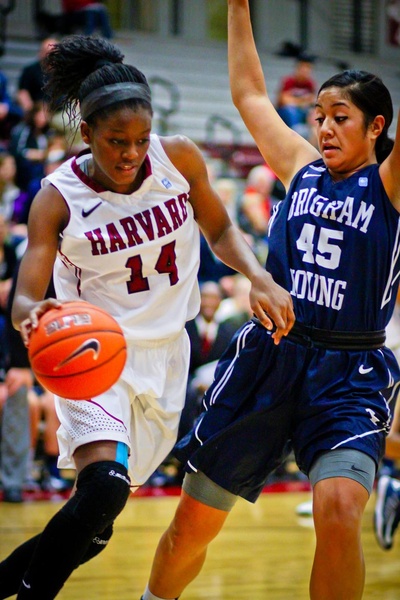 After its first game of 2014, the Harvard women’s basketball team can cross ‘start Ivy League season undefeated’ off its New Years resolutions.

The Crimson’s foray to Leede Arena this year looked much different from last year’s, when offensive struggles and a flurry of turnovers handed the team one of three conference losses all season. On Saturday, Harvard (10-4, 1-0 Ivy), led by junior forward Temi Fagbenle’s 21 points, kicked off its Ancient Eight run with a 73-63 victory over Dartmouth (2-12, 0-1).

“It’s an important win—last year we lost at Dartmouth, and in the Ivy League, there’s no end of the season tournament or anything, so every game is championship night,” co-captain Christine Clark said. “Every game is so important, so even though it wasn’t as pretty as we’d like it to be, we’ll take the win.”

The Big Green kept it close through the majority of the contest, never allowing the Crimson to extend its lead past 12. Although Harvard held guard Fanni Szabo, the league’s leading scorer, scoreless in the first half and to just 10 points in the second half, Dartmouth responded with a different offensive weapon—one familiar to the Crimson.

Point guard Nicola Zimmer, who burned the Crimson with 18 in the two teams’ last meeting, tallied 16 to lead the Big Green’s offensive attack, hitting key treys whenever Harvard began to build a lead.

“We thought if we could take [Szabo] out, they would be very weakened offensively, but their point guard, Nic Zimmer, had a tremendous game,” coach Kathy Delaney-Smith said. “She has been coming back from an injury and hasn’t really played or shot that well, and unfortunately she shot pretty well tonight, so she picked up the slack that number 15 gave up.”

Dartmouth’s Abbey Schmitt knocked down two free throws with 3:30 remaining in the game to pull the Big Green within seven, but on Harvard’s ensuing possession, guard Jasmine Evans kicked the ball out to Fagbenle, who was waiting in the left wing. The forward knocked down the baseline jumper, cementing the Crimson’s lead.

“[Temi’s play] hasn’t fluctuated,” Delaney-Smith said. “30 minutes is a lot for her, but she commanded the floor well, she rebounded really well. I thought she caught and shot more stuff around the basket than she has all year, so I’m pleased with that, and I think that needs to be a bigger part of her game.”

Fagbenle, who netted 10 of 14 shots on the day and added six rebounds, spearheaded an offense that enjoyed success on the inside, despite some easy layups not falling.

The Crimson scored 52 of its 73 points in the paint—more than double that of the Big Green’s 22 points.  A large part of that success from the height advantage of Harvard’s post players, as the Crimson held the edge in boards, 38-28. Harvard pulled down 17 offensive boards, allowing the team to capitalize on multiple second- and third-chance opportunities.

“That was one of our points going into halftime, to keep rebounding, and we did a very good job on offensive boards and defensive boards as well—I don’t remember them getting too many second-chance opportunities,” Clark said. “I think we were just pursuing it harder than they were.”

The game was the Crimson’s first since a 64-44 loss to Fordham on December 30, and the long break showed early as the lead shifted six times in the first 10 minutes.

“We were so excited about starting conference that we were trying to force ourselves, and our shots weren’t falling, so we were trying harder, and I think we’re too good to fall into that scenario,” Delaney-Smith said.

Twelve minutes into the game, Clark scored her only points of the first half from behind the charity stripe to give Harvard a seven-point lead, and the Big Green was unable to cut the deficit for the remainder of the game. Clark finished the contest with 12 points, joining Fagbenle, Evans, and senior center Elise Gordon in the double-digit club.

Despite shooting just 8.3% from downtown, the Crimson was able to hang onto its lead by knocking down 92.3% of its free throws and protecting the ball—after averaging 19 turnovers this season, the team coughed it up just 13 times against Dartmouth.