At Inaugural Rivalry On Ice, Men's Hockey Falls to Yale, 5-1 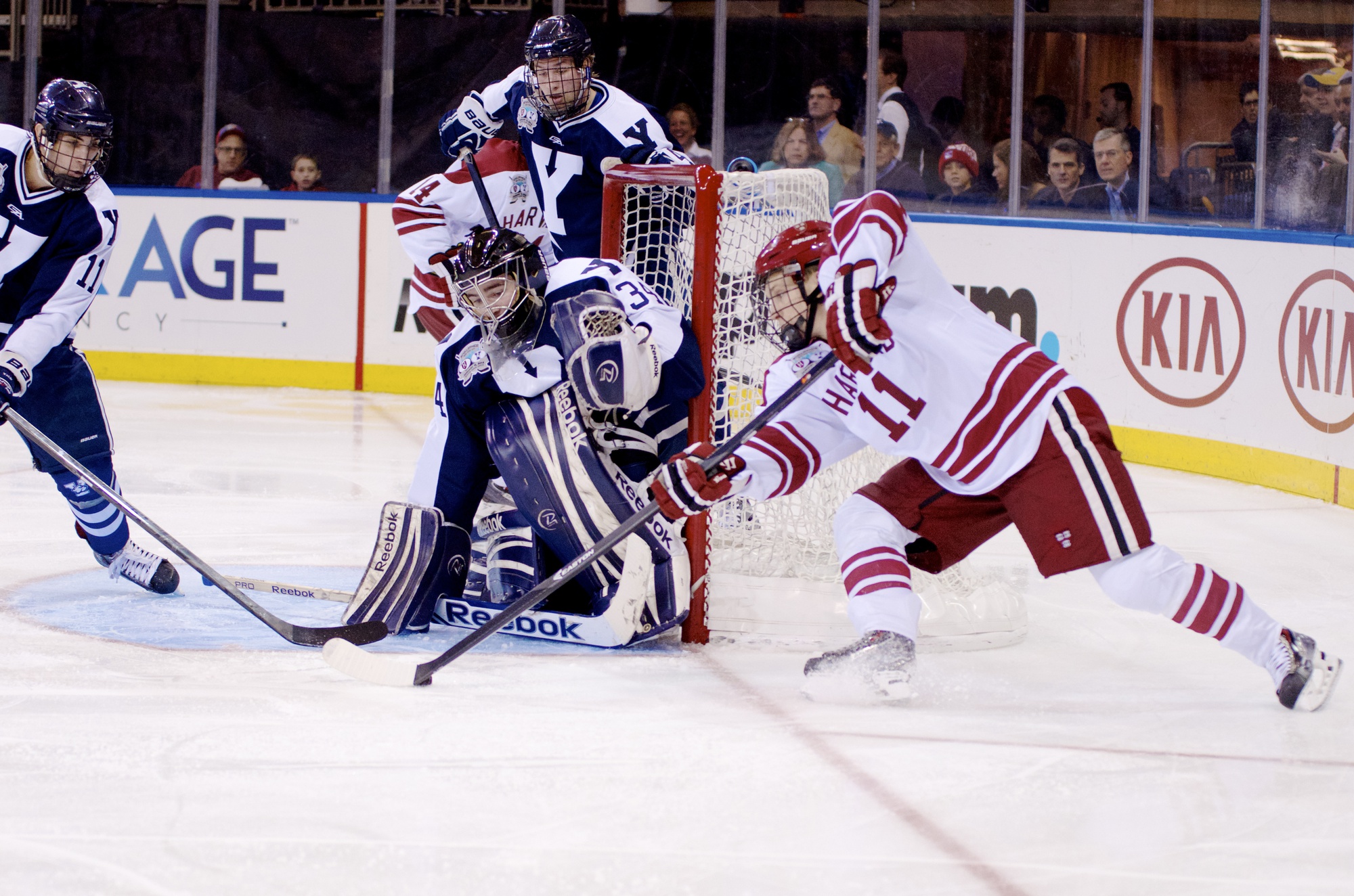 New York, N.Y.— Harvard alumni may have skated to a 7-0 win at the Chelsea Piers Sky Rink Saturday morning, but their undergraduate counterparts would not have their way with Yale that night at the World’s Most Famous Arena.

In the first-ever Rivalry On Ice game, the No. 10 Yale men’s hockey team cruised to a 5-1 win in front of 15,524 at Madison Square Garden. A three-goal Bulldog outburst over a span of three minutes early in the second period left Harvard deflated and its senior starting goaltender on the bench.

Yale (8-3-4, 3-2-3 ECAC) converted on three of four straight shots on goal in the middle frame, starting with a slapshot at the right point from sophomore Cody Learned at 2:35. The Bulldogs scored on their next shot on goal with a long-distance marker from senior defender Gus Young, and Learned poked his second of the night past senior goaltender Raphael Girard’s pads less than 30 seconds later. The score put Yale up, 4-1, and prompted Harvard coach Ted Donato ’91 to swap Girard for junior goaltender Steve Michalek.

“Quite frankly, we didn’t have all 20 guys,” Donato said. “The first goal [in the second period] kind of knocked us off balance, and we weren’t able to truly recover.”

While the Rivalry On Ice’s result will not count toward the ECAC conference standings, the anticipation leading up to this game rivaled its football counterpart.  Saturday’s match-up promised to be the first in an annual series of games that Harvard and Yale will play in New York City.

Crimson and Bulldog alumni gathered for events throughout the city on Saturday to celebrate the teams’ first meeting in Madison Square Garden in over 40 years. National Hockey League legend Mark Messier promoted the event in the days leading up to the Rivalry, and Secretary of State John Kerry was on hand for the ceremonial puck drop. Harvard and Yale wore special throwback uniforms for the occasion. At the conclusion of the game, Messier presented Yale with a game trophy at center ice.

“We got treated like pros all weekend,” Harvard sophomore forward Jimmy Vesey said. “I don’t know if any of us will ever play at MSG again, so it was truly a once in a lifetime experience.”

In the opening frame, Yale controlled the play early before Harvard entered the first intermission with the momentum seemingly on its side.

Sophomore center Stu Wilson connected with freshman forward Mike Doherty in the crease 4:23 into the game to put the Bulldogs up one. Wilson drove past the Harvard goal line on the right side before dropping the puck to Doherty for a one-timer past Girard.

Vesey responded minutes later with a one-timer of his own. After junior defender Pat McNally drew a tripping minor from senior forward Kenny Agostino for the game’s first power play ten minutes into the frame, freshman Luke Esposito set up behind the Yale goal line on the right wing and found Vesey with a well-timed crossing feed to beat freshman goaltender Alex Lyon.

“I think in the second half of the first period we kind of took the game over a bit,” Donato said. “We used our speed, and [Lyon] made a couple of big saves to keep it at 1-1.”

But the Crimson’s fortunes turned on a bounce in the second.

In Harvard’s last game against Yale—a 2-2 tie on Dec. 7—Girard had a career-high 52 saves—the most by a Crimson goaltender in 29 years. Saturday was a different story as the senior struggled to track the puck from the blueline.

Two and a half minutes into the middle frame, sophomore Yale forward Cody Learned entered the Harvard zone from the right wing and unleashed a quick slap shot from the point that seemed to catch Girard off guard. The puck clipped the senior goaltender’s pads before trickling past the Crimson goal line.

Young struck from the opposite point on Yale’s next shot 5:15 into the period, beating Girard top-shelf through a screen. 26 seconds later, Learned, who earned game MVP honors, punched in his second goal of the night after Girard could not locate a rebound in front of his pads off a long shot from sophomore Yale defender Ryan Obuchowski.

With Michalek in net, Harvard saw only a few chances to get back in the game. Yale limited the Crimson to only four shots on goal in the third period. Agostino added the Bulldogs’ fifth goal with less than nine minutes left in the game off a pass from behind the net by Young.

The next Rivalry On Ice game is slated for January 2015 at the Barclays Center in Brooklyn. By then, Donato hopes that his young squad will be a year wiser and more prepared to reclaim a rivalry that has proved somewhat lopsided in recent years.

“If there is a play or a situation that doesn’t go our way, our response needs to be better,” Donato said. “Hopefully we’ll learn from this. I really believe in this team. It’s a good group of character guys, and I think we’ll bounce back from this.”

—Staff writer Michael D. Ledecky can be reached at mdledecky@gmail.com.