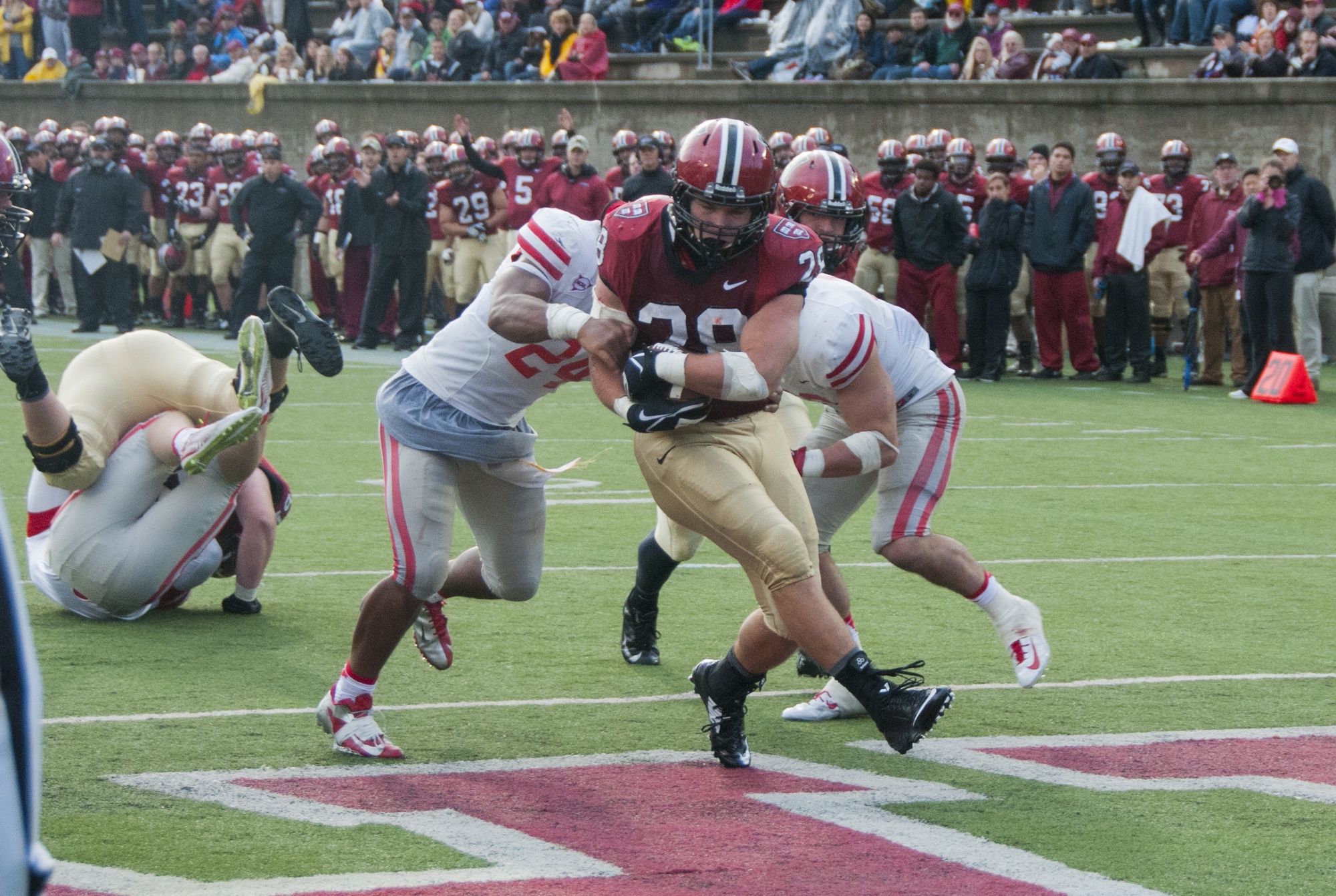 Senior running back Andrew Casten enters the end zone for the game's final touchdown late in the fourth quarter. Harvard rattled off 24 points in the second half to defeat visiting Cornell.
By Samantha Lin, Crimson Staff Writer

The last time that the Harvard football team was shut out in the first half, it was 2010—and the squad eventually dropped the contest to Penn, 34-14.

When senior kicker Andrew Flesher’s 43-yard field goal attempt bounced off the right post in the last play of the first half, the Crimson (4-0, 2-0 Ivy) headed into halftime against Cornell (0-4, 0-2) with the score knotted at zero.

But this time around, Harvard found the offensive firepower that had been missing for the first 30 minutes. After failing to score on each of its drives before the intermission, the Crimson scored on all but one of its second half drives.

With the 24-7 win over the Big Red and Yale’s defeat at the hands of Dartmouth, Harvard remains the only Ivy League team with an undefeated record.

“We started out of joint on offense at times, obviously, but to our kids' credit, they really did a great job in the second half,” Harvard coach Tim Murphy said. “They pulled it together, they executed, they found a way to get a win."

The Crimson didn’t get onto the board until its first drive of the second half, when Murphy elected to insert junior running back Paul Stanton, who was uncertain to play before the game due to a preseason injury aggravated in the game against Holy Cross.

Stanton rushed for 24 yards on that drive before junior quarterback Scott Hosch found sophomore tight end Anthony Firkser wide open on the left sideline on fourth-and-14 for the game’s first touchdown to put Harvard up, 7-0. Flesher hit a short field goal on the next drive, and Stanton found the end zone on the following possession to give the Crimson the 17-point advantage.

Cornell started three drives in Harvard territory but couldn’t capitalize on the field position, experiencing similar difficulties on the offensive side of the ball. Before halftime, the Big Red punted the ball six times, turned it over on downs once, and threw one pick. Neither team managed to make it into the red zone during the first half.

Despite forcing four turnovers in the first half, Cornell failed to put points on the board until late in the fourth quarter, largely due to the Crimson’s experienced defensive front seven that stuffed the Big Red rushing attack. On 34 rushing attempts, Cornell registered just 35 yards.

Without success in the running game, Cornell was forced to rely on freshman quarterback Jake Jatis to move the chains. Jatis ended the day with 140 yards, but the rookie was forced to make errant throws throughout the game while under pressure.

Two of the four Crimson sacks on the day came from senior defensive end Zack Hodges, who with his first sack early in the first quarter took sole possession of the all-time record at Harvard. Hodges, who also had a quarterback hurry, now has 22.5 career sacks.

“I didn't really know [that I broke the record] until coach came over and was like, 'You have the record, congrats,’” Hodges said. “But it's very humbling. Hopefully one day one of my young goons, that's what I call the younger D-ends, one of the young goons will take it from me."

With Harvard’s offense sputtering early on, the defense largely kept the team in the game. The Big Red failed to convert a first down until its last drive before halftime, which ended when junior linebacker Eric Medes caught a tipped pass to pick off Jatis.

Even with a struggling offense, senior punter David Bicknell got quite a bit of rest, as the majority of Harvard’s first-half drives ended in a turnover.  Troubles began early for the Crimson—on Harvard’s first offensive play of the game, Hosch’s pass was snagged by Big Red defensive lineman Justin Harris.

The senior lineman made another play two drives later, when Harris hit Hosch on a scramble to force a fumble.

Whether the weather played a factor or not, the Crimson wideouts had trouble hanging onto the ball in the first half. Harvard finally entered Cornell territory for the first time when Hosch connected with freshman tight end Jack Stansell on a 17-yard pass, but Stansell coughed up the ball to end the drive. Hosch ended the half with two picks.

The Crimson’s final turnover came late in the fourth quarter, on the only drive of the half that didn’t end in points. Senior running back Andrew Casten lost the ball deep in Harvard territory to set up Cornell’s only scoring drive.