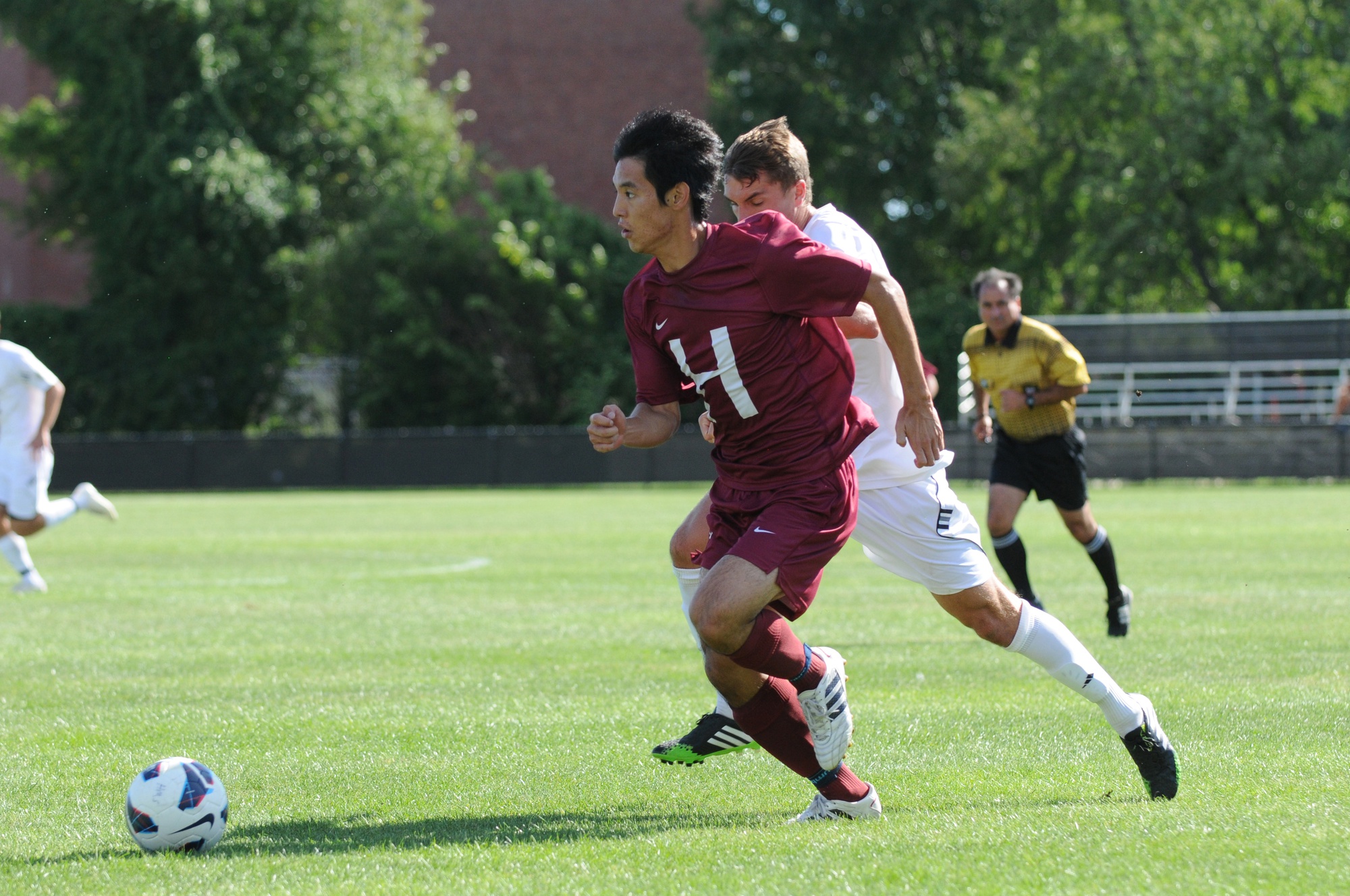 Senior forward Hiroki Kobayashi, shown here in previous action, notched the only goal of the day to push Harvard past Cornell in a tight conference matchup.
By David Freed, Crimson Staff Writer

“We know that when we are playing on this field there’s no way that we are losing,” Kobayashi said. “Whenever we play a home game, we have a really good mentality going into the game.”

After a scoreless first half in which all five of its shots missed the goal, the Crimson came out and controlled the ball from the beginning of the second half. Big Red goalkeeper Zach Zagorski, who had surrendered just five goals all year, withstood the initial barrage—parrying away a header from junior co-captain Mark Ashby a minute in.

“He is very good. He is not very tall but he gets the height; he’s very brave,” Harvard coach Pieter Lehrer said. “He gets down low really well. He is very good with his feet and he is an outstanding goalie.”

The steady Cornell defense, however, made its first mistake of the game after a deflected shot in a box early in the second half. Freshman midfielder Christian Sady controlled the ball and noticed a wide-open Kobayashi behind the defenders. Two touches later, Harvard had the lead.

A jubilant Kobayashi jumped onto the nets surrounding the field, falling back into the waiting arms of teammates. Forty minutes remained, but the Big Red would only get off a single shot on goal the rest of the way.

“They are by far the best defensive team we’ve played and that makes it difficult,” Lehrer said. “We had to scrape for second balls…to get going. [But] those guys are resilient and fight through everything.”

The stakes were high. A loss would ostensibly eliminate Cornell—the 2012 league champions—from this year’s race, considering the Big Red’s 1-0 loss to 2013 champion Penn a week before. For Harvard, which ends the season in Philadelphia, it was an early opportunity to strike a knockout blow to a rival’s league hopes.

With Cornell fighting to stay alive, tension clearly bubbled to the surface. Harvard committed 22 fouls on the game as five total yellow cards were handed out. After a late whistle blew against Cornell, the Big Red coach erupted at the referees, drawing a yellow card in the 77th minute. A minute later, continued jawing at the official brought out the red.

Ignoring the distractions on the other bench, the Crimson seized the moment, shutting down the Big Red and extending its scoreless streak to 254 consecutive minutes of game time. Led by Ashby, Harvard locked down the wings of the field and forced the Big Red to navigate through the middle, where Crimson defenders swarmed to the ball. Junior goalkeeper Evan Mendez made only two saves all game as Cornell failed to generate good chances.

“[Ashby] is a fantastic player and he leads the entire group,” Lehrer said. “They do the little things, and what gets them their result is that each player focuses on what they can do to make it work every game, and Mark orchestrates that.”

The team’s second straight shutout comes after giving up two goals in six of the first eight games of the season. Dating back to last year, the Crimson has allowed just six goals in its last eight Ivy League contests. Lehrer noted that the improved results have not come from big picture adjustments, but consistent improvement on the team’s general scheme.

“We just work hard to get better at what we do and make our strength into a great strength,” Lehrer said. “We work daily on how we defend.”