Swift in Style at Head of the Charles Regatta 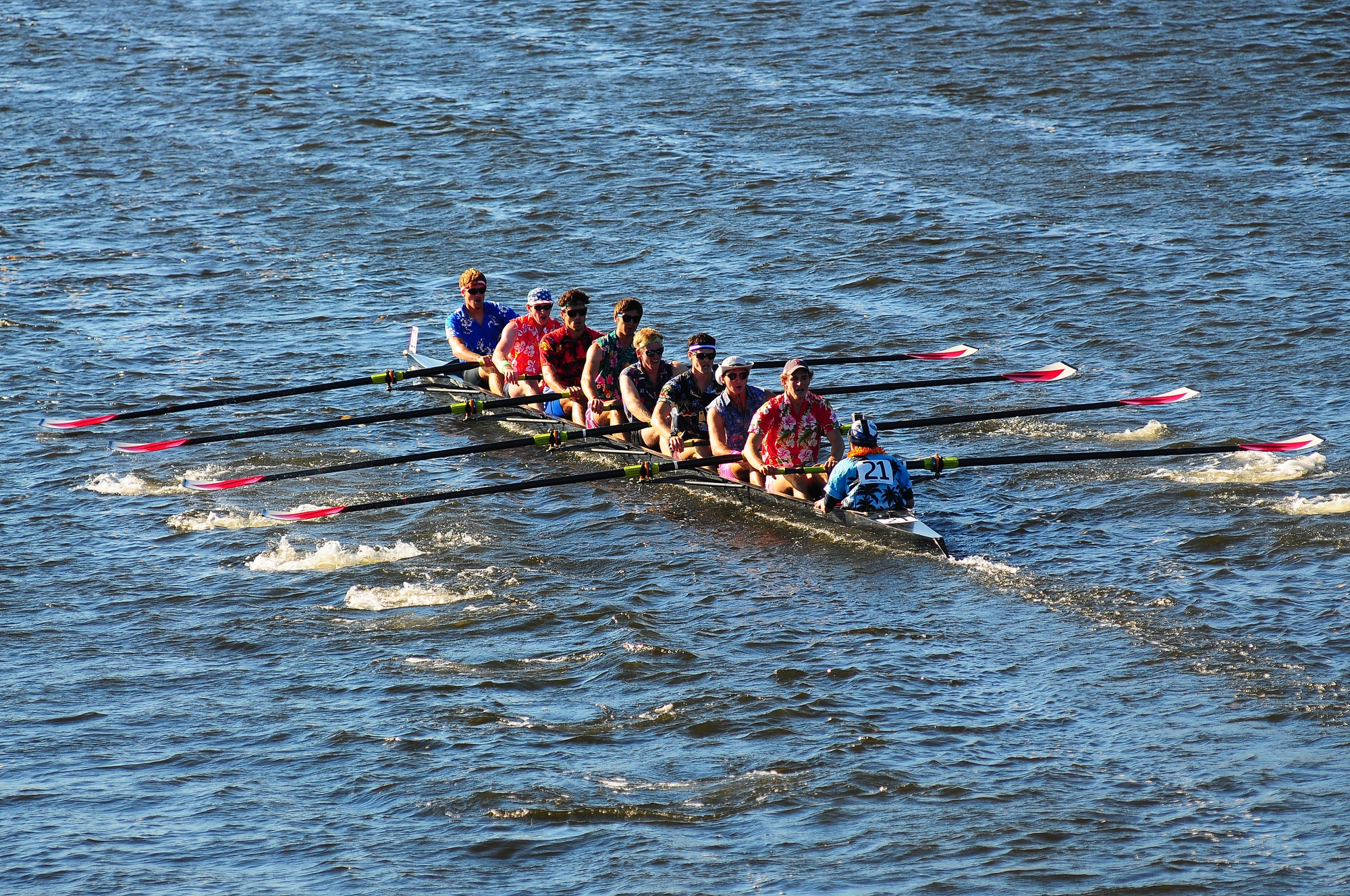 A variety of outfits, from pirate get-ups to Hawaiian shirts, can be seen on crews all along the river at Head of the Charles.
By Sam Danello, Contributing Writer

When Cameron Winklevoss ’04 climbed into a freshman heavyweight boat for his first collegiate race, he was wearing a prison uniform.

He was not the only one. In the boat with Winklevoss sat seven other Harvard rowers and a coxswain, all donning the striped shirt of a jailed inmate. It was the 2000 Head of the Charles, and the group had chosen this outfit a few days before the race.

The unusual style did not hinder the performance of the boat. Urged on by a partisan Harvard crowd, the Winklevoss twins’ boat started fast and got faster, ultimately breaking the freshman heavyweight course record by five seconds.

As unique as the moment may have felt, at least one aspect was comparatively ordinary—the choice of clothing. A prison shirt may make a rower stand out on an average day, but during the Head of the Charles Regatta—when hordes of oarsmen descend on Cambridge in superhero outfits, spray-painted t-shirts, monster costumes, matching polo pullovers, and neon socks—wearing stripes seems rather unremarkable.

Among the many traditions that give character to the Head of the Charles, the tendency of teams to dress in quirky outfits is both the most noticeable and the least explicable. At no point did an official decree encourage, or even suggest, that teams should create specialized uniforms. Instead, the tradition has emerged and evolved on its own.

One explanation of the origin of the costumes is the event’s proximity to Halloween. Since 1965, the start of the annual races, the Head of the Charles has occurred in mid-October. Yet some, such as Harvard assistant coach Patrick Lapage ’12, argue that the flashy style of the Regatta simply reflects the nature of the fall rowing season.

“Fall isn’t really the serious time of year for us,” Lapage said. “It’s good to get a measure of where you are, but the real racing season is the spring. That’s where our focus is.”

As a heavyweight rower with Harvard while an undergraduate, Lapage had four years of dress-up experience himself. But his strongest memory of costumes at the races came from last season, his first as coach, when one heavyweight team imitated a pirate ship.

“Their coxswain had a big beard and a parrot,” Lapage said. “Most of the guys just ended up buying girls’ blouses, which was pretty funny.”

The 2013 boat was not the only recent team to adopt the marauder theme. In 2005, a heavyweight varsity four competed in eye patches, gold hoop earrings, and bandanas. That same year saw a Crimson boat decked out in medical scrubs, face masks included.

Costumes such as these comprise one category of HOCR dress. Only at the Head of the Charles can a spectator see a shell containing the Hulk, Luigi, and Batman—a 2011 Harvard entry—push ahead of a shell filled with the colors of the rainbow, each one represented in t-shirt form.

For those who do not wish to impersonate a cartoon character, the bizarre clothing custom has a second category: personalized t-shirts. These shirts typically have similar designs—some personalized note scrawled across the back, often in spray paint—but teams have used shirts to convey vastly different messages.

Consider the 2002 Radcliffe heavyweights, who protested an NCAA rule requiring all sports teams to take off seven weeks by creating shirts with the design of a crossed-out seven. Similarly, the 2011 Harvard heavyweight first boat celebrated late coach Harry Parker’s then-50 years at the helm of the program by spray-painting shirts spelling out “50 Years” as a group.

Lightweight captain Alexander Bonorris explained that such t-shirts are more popular than costumes among lightweight boats.

In a past iteration, Bonorris’ boat wore matching shirts with “H170” on them, poking fun at the extra pounds—lightweight rowers have to be under 160 pound—the oarsmen had put on during the fall.

“We don’t have a plan as to what we will wear yet this year,” Bonorris said. “Usually it comes together around the last minute.”

A reason for the improvisational nature of the shirts is that athletes get to decide what to wear on their own. As long as the outfits don’t get in the way of rowing, coaches won’t interfere.

“[The boats] just kind of do it themselves,” Lapage said. “We don’t really give them any guidance. Just something that’s not totally ridiculous.”

The tradition of costumes stretches back three decades. A 1983 article in The Crimson mentioned that some rowers chose to wear “Mickey Mouse hats and Halloween masks” and that fans threw beer cans to the oarsmen after the race had ended that year.

As distracting as some outfits might be, they contribute to an environment that is unique to the Head of the Charles.

“You can definitely feel the atmosphere when you get to the start line,” senior heavyweight Charles Risbey said. “It’s not often you get to row in front of hundreds of thousands of people.”