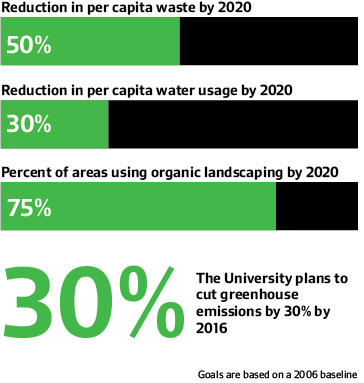 The University will apply new “green” standards across all 12 schools to reduce waste and energy use, as a part of a first-of-its-kind five-year sustainability plan announced Wednesday in a community-wide email from Executive Vice President Katherine N. Lapp.

University-wide goals include reducing per capita waste by 50 percent and water use by 30 percent by 2020, from a 2006 baseline. The University also hopes to use organic landscaping for at least 75 percent of landscaped areas by 2020.

Other efforts consolidated in the plan include bringing all University facilities into compliance with Harvard’s Green Cleaning standards, creating standards for climate preparedness through the development of new building and critical infrastructure design techniques, and developing University standards for environmentally friendly vendors and products.

“These are all University-wide goals, so we’re not expecting the same implementation in every building,” Heather A. Henriksen, director of the Office of Sustainability, said in an interview earlier this week. “There’s always going to be one campus that is really good at something and one campus that struggles more,” she added, noting that schools with a large number of labs would face more difficulty trying to reduce their energy usage.

Harvard has already been working to cut greenhouse gas emissions 30 percent by 2016, compared to a 2006 baseline. In April, University President Drew G. Faust wrote a letter to the Harvard community detailing progress toward that goal, introducing other measures to increase campus sustainability, and pledging continued action by top leaders.

The Harvard announcement comes one day after the University of Pennsylvania released its Climate Action Plan 2.0, which will invest $190 million in projects to promote environmental sustainability on campus.

In addition to comparing notes with other universities, Harvard sought to “benchmark” its plan against “leaders broadly in sustainability” in both government and the private sector, according to sustainability spokesperson Colin B. Durrant.

Starting in the spring of 2013, the Office of Sustainability gathered feedback from students and faculty to begin developing the plan, working with students from the College and graduate schools on the Council of Student Sustainability Leaders.

To chart the progress of individual schools, the Office of Sustainability plans to coordinate meetings every two months for facilities and operations managers at each school, who will be responsible for implementing the sustainability plan.

Jaclyn Olsen, the Office of Sustainability’s assistant director, said that in addition to bimonthly meetings, the office will publish annual reports outlining the University’s progress toward its goals.

“We’re really trying to be transparent about what we’re doing well at and what we’re not doing well at so we as a community can push ourselves to go farther faster,” Henriksen said, adding that she hopes Harvard’s sustainability plan will influence other institutions.