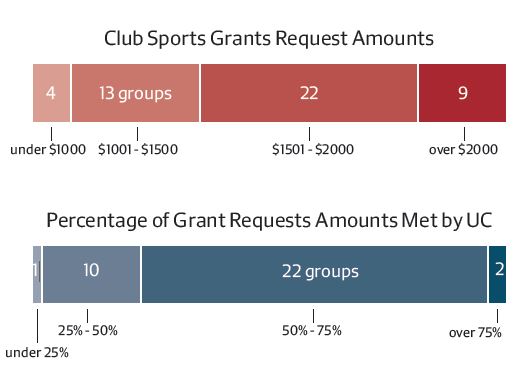 Despite a near 60 percent increase in the number of club sports that applied for Undergraduate Council funding this semester, the Council is expected to, on average, fund organizations at higher rates than last year.

The increase comes at the same time, however, that the Athletics Department appears to have reduced the maximum amount it allocates to club sports teams from $500 or more to $460, according to UC Finance Committee Chair Leah C. Singer '16 who oversees the majority of the Council’s allocations.

Most club sports teams rely on both the UC and the Athletics Department for funding each year.

Last year, UC leaders said that, because of budget constraints, they were only able to allocate about $32,000 in total to club sports for the fall semester. This year, though, the Council has been able to increase allocations by over 50 percent to about $50,000.

The increase is due in part to lower demand among other student groups applying for general funds and to changes in the finance committee's policies that have given club sports greater priority, according to Singer.

Although the allocations will not be officially finalized until the entire UC votes on them Sunday, the current numbers will very likely be approved, according to Singer.

The highest any club sport received from the Council this semester is $1,400, up from $1,275 last year, but notably lower than the $2,000 figure many groups received the previous year. Singer still praised the increase this year, saying she is “extremely proud” that the UC was able to increase funding while the number of sports applying ballooned.

At the same time, Singer, along with club sports leaders, allege that the Athletics Department has reduced the maximum amount of funding allotable for groups.

Casey E. Blodget, the recreational programs and club sports coordinator for the Athletics Department, declined to comment on whether any such cuts, in fact, have occurred. Associate Dean of Student Life David R. Friedrich was not able to be reached for comment.

Tyler T. Jankauskas ’16, the treasurer of Shotokan karate, said in an interview Thursday that his group’s funding from the Athletics Department was cut drastically from about $1,400 last fall to $460 this semester, despite having reportedly applied for $3,000. Harvard men’s swimming received about $500 last fall from the Athletics Department, but only $200 this semester, according to Singer, who referenced their application to the UC.

Singer said that, to her knowledge, no club sport received more than $460 this semester from the Athletics Department. In the past, the groups have received about $500 or more, Singer added.

“It’s just very bizarre. It almost feels like a backdoor way to give more of the responsibility to the UC to fund what [the College] should be funding,” she added.

Jankauskas, for his part, said he was “very surprised” when he saw the large cut in funding. He added that the cuts will “limit” the group’s operations, including its ability to purchase equipment and hire instructors.

“We just have a bunch of things we’d like to do, but we don’t have any funding to do it,” he said, adding that the group was “absolutely nowhere near” the amount of funding it ideally wished for.

Crystal K. Stowell ’15, president of club speedskating, said that her club, too, saw a cut of about $40 in Athletics Department funds.

Stowell said she wasn’t expecting the cut, but that the $40 cut alone will have “minimal effect” on the group.

Matt R. Jacobson ’17, treasurer of club men’s hockey, said that his group received $60 more from the Athletics Department this year, but that the total amount received was about $460, the alleged maximum.

UC President Gus A. Mayopoulos '15 said that he is “grateful” the University does fund club sports in part, but that groups will “suffer” from the cuts.

Singer noted what she saw as an apparent contradiction the University’s focus on student travel group funding and the cuts to club sports.

“It seems contradictory to emphasize travel safety in a working group, but then cut club sports in funding. We all know they travel for tournaments. It doesnt take much to put that together,” she said.