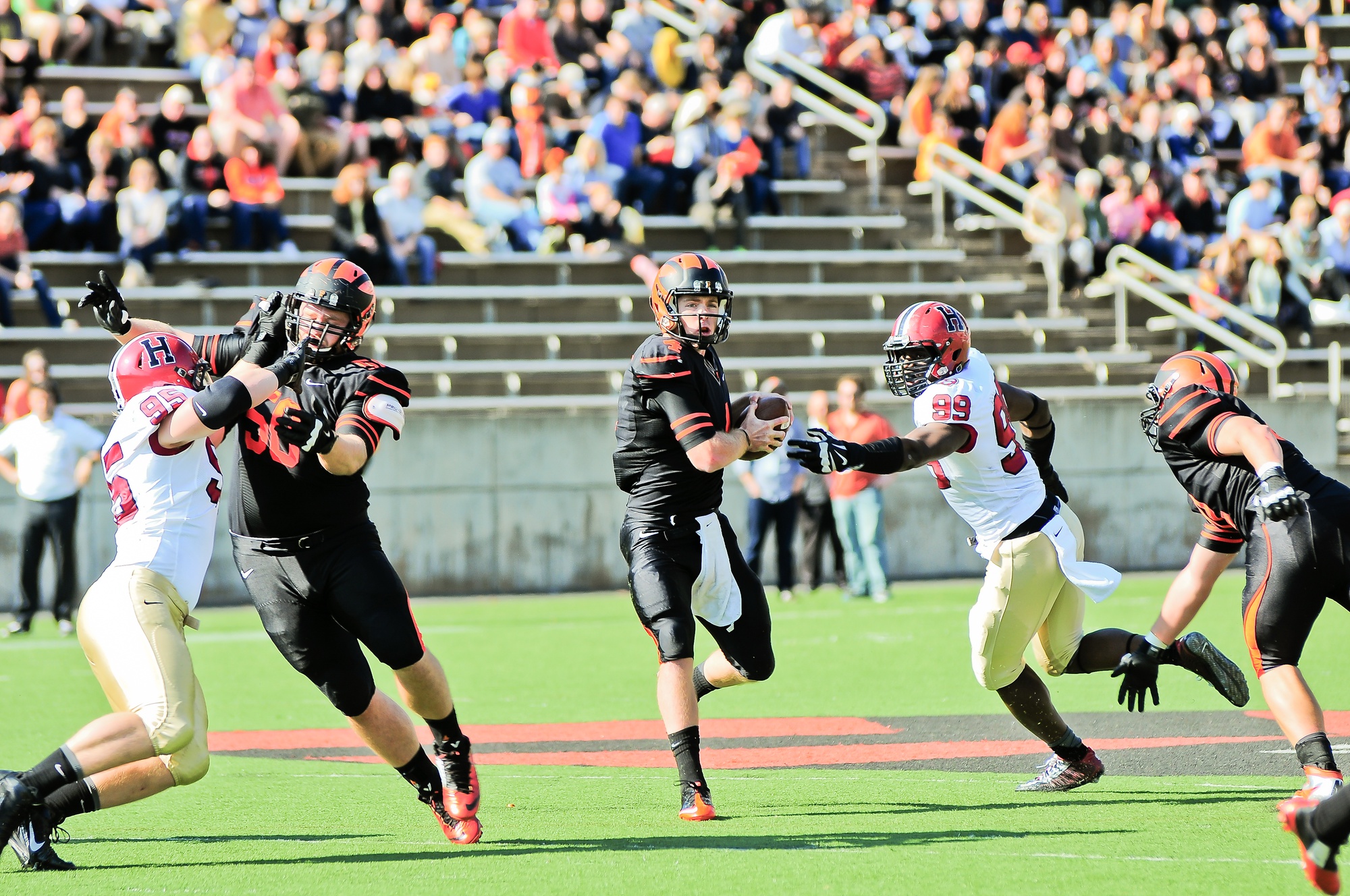 Princeton quarterback Quinn Epperly couldn't find the same magic he had in the last two meetings with Harvard, and the Tigers fell, 49-7.
By David Steinbach, Crimson Staff Writer

Conner Hempel missed four of the football season’s first five games with a back injury. But the Harvard senior quarterback made up for a significant amount of his squandered statistics in the sixth game against Princeton.

In his first start since the opener against Holy Cross, Hempel made his presence felt all over the field. The senior completed 25-of-31 passes for three touchdowns, and he rushed for an additional two. There was not a single individual more responsible for the Crimson’s 49-7 win over the Tigers in New Jersey than Hempel.

A large part of the quarterback’s success stemmed from his ability to improvise. Throughout the game, Hempel evaded tacklers and extended plays, using his legs to free himself and find open receivers.

Such intangibles characterized Harvard’s first touchdown of the day. On the Crimson’s (6-0, 3-0 Ivy) third drive, Hempel spun away from two blitzing Princeton (3-3, 2-1) defenders, dashed his way toward the left sideline, and fired a bullet to sophomore wide receiver Joseph Foster, who weaved his way through the defense for a 39-yard score.

Hempel propelled his team into the end zone three more times before the end of the first half, highlighted by a perfectly thrown 49-yard fade route to senior wide receiver Seitu Smith.

Many quarterbacks would have been more than satisfied with a full game of Hempel’s numbers just from the first half—after two quarters, the senior had racked up 264 yards in the air on 20-of-22 passing, had accounted for four touchdowns, and had led Harvard with 34 yards rushing.

“[Hempel’s] improvisational ability is something that’s really tough to defend,” Crimson coach Tim Murphy said. “We get to extend plays; we get additional yardage with our quarterback running the football. The combination is something that you just can’t coach.”

While Hempel and the offense accounted for the points, the Crimson defense had the Tigers’ attack on lockdown for the entire game.

Midway through the fourth quarter, Princeton’s drive chart was dismal, to say the least: on 14 possessions, the home team had punted 12 times, fumbled once, and turned the ball over on downs. The Tigers finished with just 244 yards and their lowest point total of the season.

“It’s always great when everybody’s out here flying around, not taking no for an answer,” Harvard captain Norman Hayes said.

The Crimson registered only one sack on the day, but consistent pressure combined with effective coverage in the secondary ensured that Princeton could never get its rapid-fire offense going. While the Tigers employed trickery and spread the field horizontally, they rarely attacked the Harvard defense downfield.

Princeton avoided a shutout on its last possession, finally getting on the scoreboard with a touchdown against second-string Harvard defenders.

“They’re a good defense,” Princeton coach Bob Surace said. “We had only the one turnover, but we’re not getting turnovers on defense. That’s a big part of why we are where we are right now. Their front really squeezed the holes. They did a great job with that.”

The drama was aplenty the last two times Harvard and Princeton faced off on the gridiron. From 29 unanswered Tigers points in the 2012 fourth quarter to a triple-overtime contest last year, Princeton found thrilling and creative ways to defeat its rival.

Things could not have been more different on Saturday, as Harvard dominated from start to finish. Even with the teams’ past history in mind, the outcome of the game was effectively decided by halftime.

“It got away from Princeton, and we’ve all been there,” Murphy said. “We’ve been on the other end of it.”

Harvard’s previous largest margin of victory over Princeton was 34 points—a differential that was shattered in 2014.

“I told the guys in the locker room, it’s probably the best week of practice we’ve had since I’ve been here for Harvard,” Surace said. “Some things you can’t explain.”