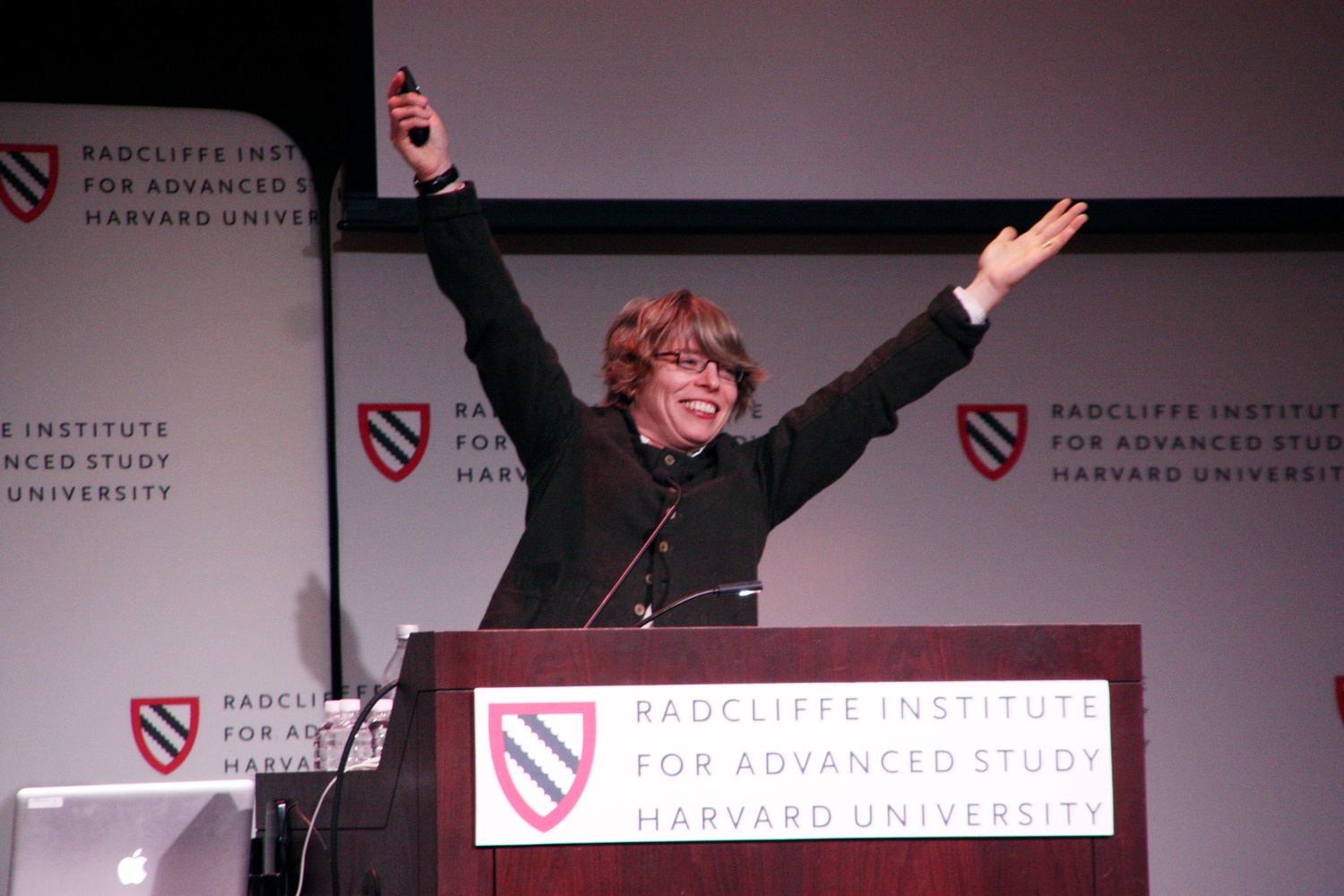 Wonder Woman crashed through Johnston Gate, escaped the chains of patriarchy, and soared as a feminist icon in the early twentieth century, argued American History professor Jill M. Lepore in a lecture on the superheroine’s history and connection to Harvard on Thursday afternoon.

More than 100 attendees packed the Knafel Center at the Radcliffe Institute for Advanced Study to hear Lepore retrace the academic and feminist influences on Wonder Woman and her creator, William Moulton Marston, who graduated from the College in 1915.

Radcliffe historian Susan Ware set the alternately irreverent and sincere tone for the lecture as she introduced Lepore, interspersing her informative comments with humor.

“I’m delighted that Lepore is introducing the wonderful rich histories of suffrage, birth control movements, and modern feminism to general readers, although they may learn more about the history of bondage along the way than they expected,” she said.

Lepore, whose latest book “The Secret History of Wonder Woman” was released earlier this week and formed the basis for the talk, claimed that her titular heroine was originally a pro-women's equality propaganda figure.

“If you want to tell me that Wonder Woman is not a feminist project, we’ll have to take that outside, because the project is very explicitly feminist,” she said. “Its promise is to teach boys and girls that women can do anything.”

Lepore then delved into Marston’s connection with Harvard, explaining that the young psychology student was profoundly influenced by the College’s decision to bar radical suffragette Emmeline Pankhurst from speaking at Sanders Theatre. Decades later, Marston would depict Wonder Woman bursting through the gates of a fictional college, symbolically carrying on Pankhurst’s struggle, according to Lepore. 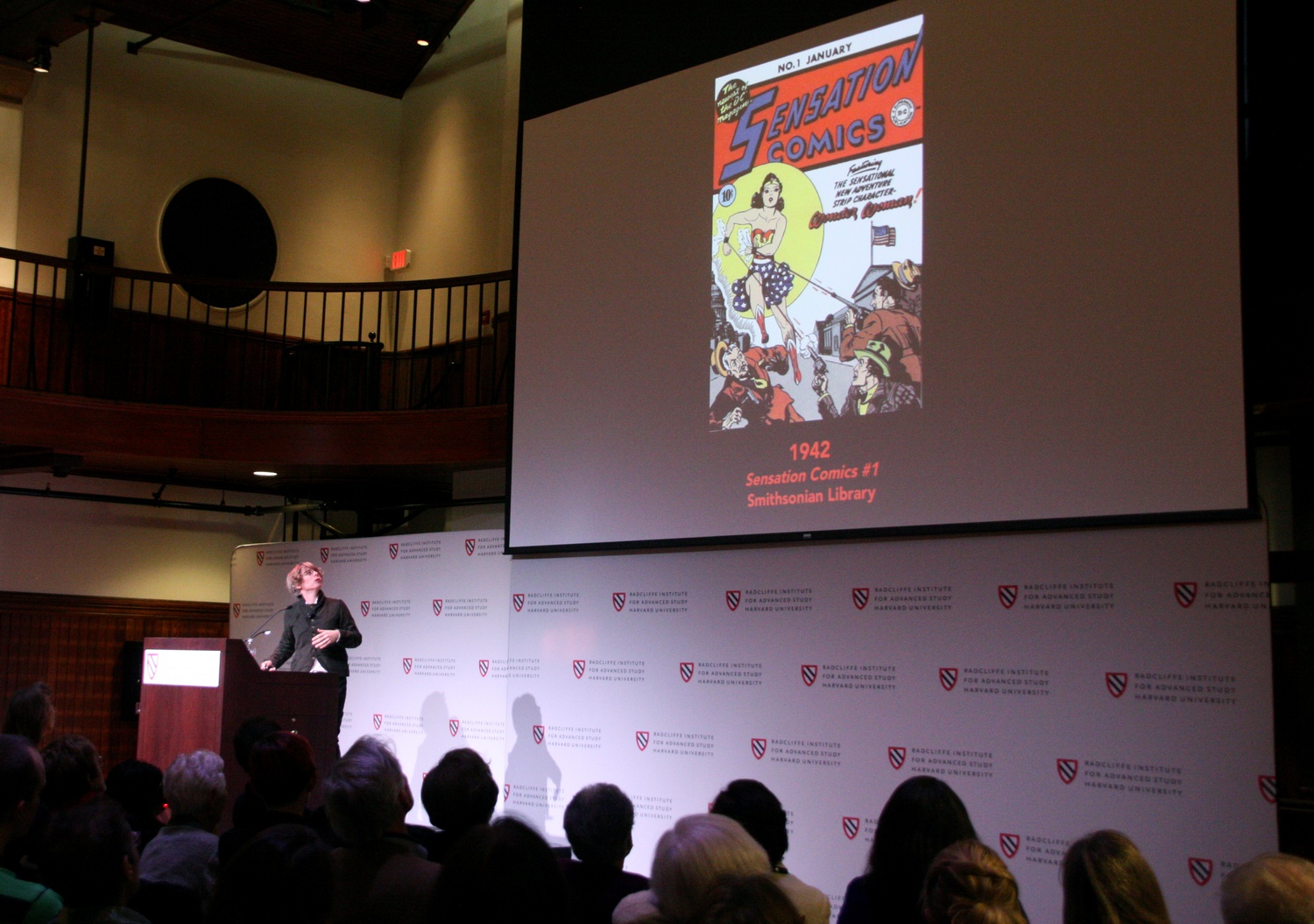 Jill Lepore, David Woods Kemper ’41 Professor of American History, looks up at her presentation, titled "How Wonder Woman Got into Harvard". Lepore's lecture at the Knafel Center accompanied the recent release of her newest book, titled "The Secret History of Wonder Woman." By Connie Yan

Lepore also connected Marston’s research in the Psychology Department­—he helped to invent the lie detector—with Wonder Woman’s nemesis Doctor Psycho, arguing that the exploitation of women in the labs inspired the character.

“The central conceit and plot of Wonder Woman involves exclusion of Radcliffe women from classrooms at Harvard, and the use of women as objects of study by Harvard professors,” she said.

Lepore also shared that Marston himself was intimately acquainted with the feminist movement of the early twentieth century: his mistress was the niece of birth control activist Margaret Sanger, and feminist symbols of balls and chains recur throughout his comics.

Although Marston died in 1947, Lepore argued that his works provide a bridge between seemingly disparate “waves” of feminism.

“When you put Wonder Woman back in the 1940s and you realize that she is inspired by these suffragists and feminists in the 1910s, it’s a source of continuity,” she said. “Gloria Steinem and others of her generation talk about how they were reading Wonder Woman comics, and it’s like the missing link is finally there. The twentieth century makes sense.”