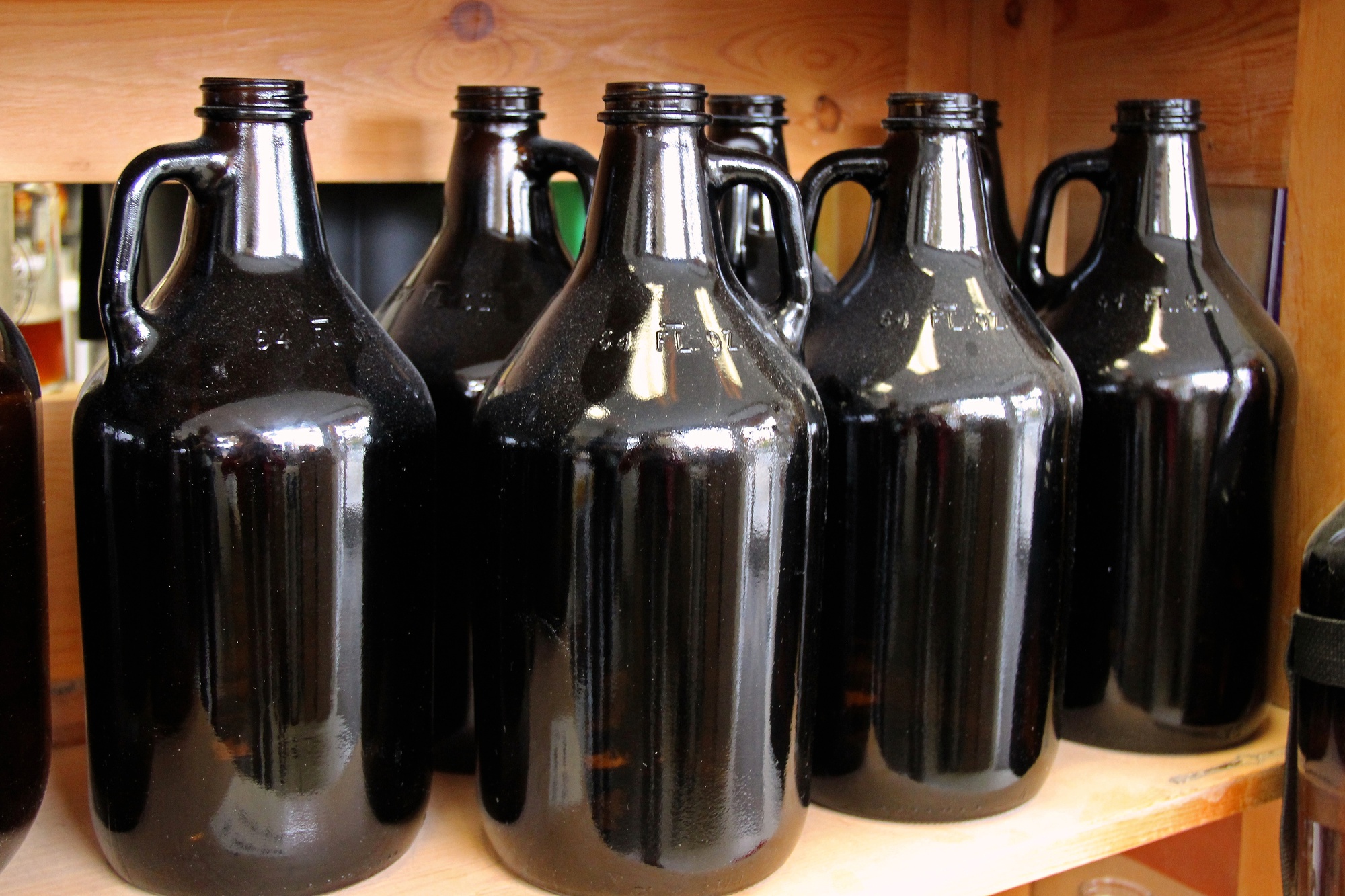 64 oz. growlers for sale at the Modern Homebrew Emporium near Davis Square. These vessels are used to store and serve beer at the end of the brewing process.
Advertisement
Advertisement

“Everything went wrong,” Gavin says. “It was four in the morning, I had all this work to do, and I was just screwed.” 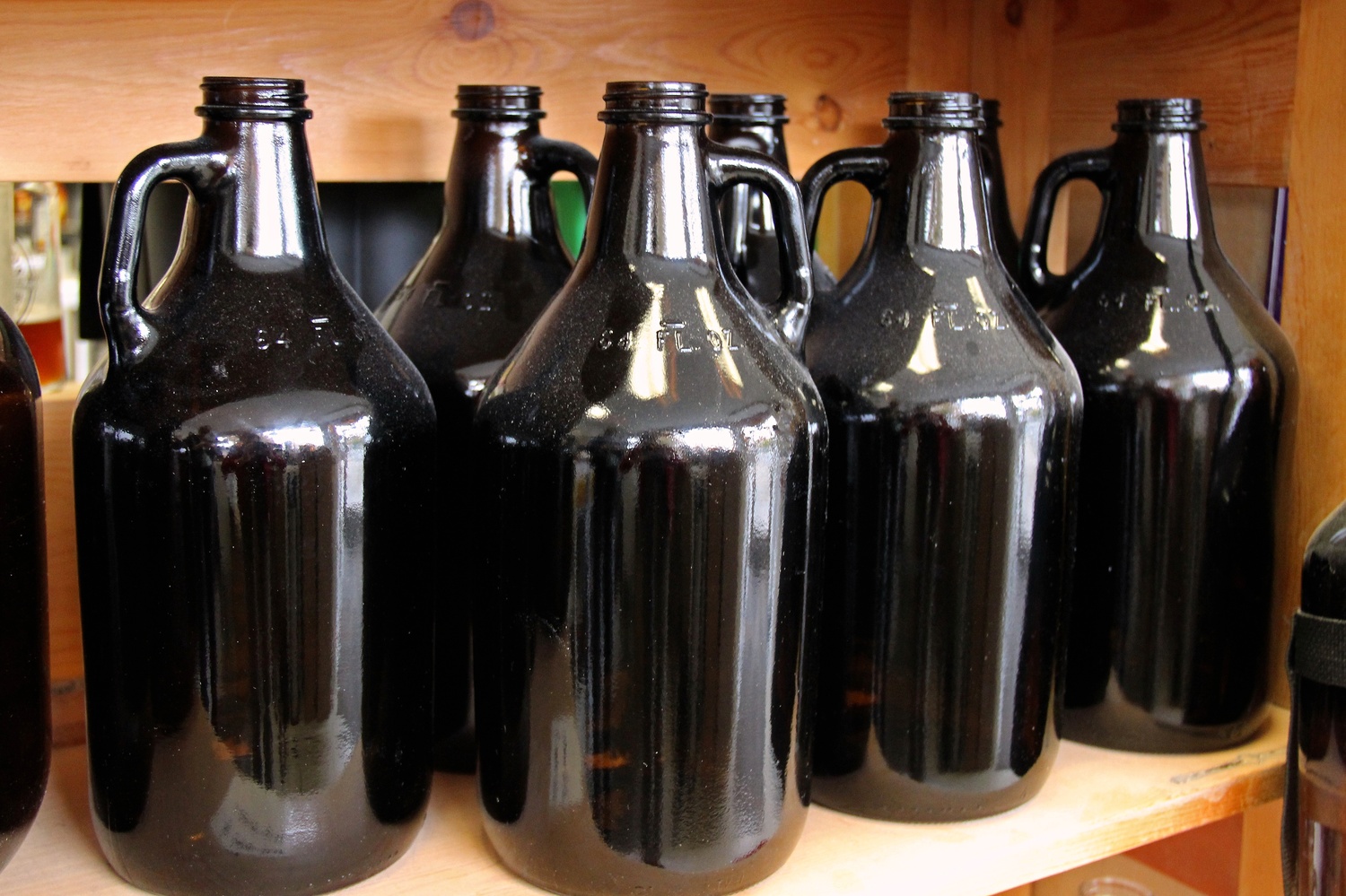 64 oz. growlers for sale at the Modern Homebrew Emporium near Davis Square. These vessels are used to store and serve beer at the end of the brewing process. By Alexander L. Jaffe

By four, Gavin had only finished boiling malt extract with hops, producing a hot substance known as wort. But before he could proceed, he had to cool the mixture to room temperature.

“And so, not thinking, in a delirious, stupid state, I split up the wort into multiple containers so that I could put it into ice baths in separate spots,” Gavin says. “I put maybe a gallon’s worth in my glass fermenter [with the ice bath], not thinking at all… and the hot and cold cracked the glass.”

A good deal of the beer was lost, and the fermenter was ruined.

“It was the worst thing that could possibly happen,” Gavin says. “Ironically enough, that turned out to be one of the best batches I’d ever made.”

Gavin is one of Harvard’s most committed homebrewers. At times of peak production, he’ll turn out a five-gallon batch every one or two weeks—almost every one brewed in a different style.

“I try not to make the same thing twice,” Gavin says. “Even if you’re brewing every weekend and you have a couple batches going at a time, you really can’t make everything.”

When he’s making statements like these, it’s easy to imagine Gavin as the proprietor of a local microbrewery; he’s certainly ambitious enough. But professional brewers don’t have to keep their brewing apparati in dorm rooms, nor do they have to schedule their output around when they have free Saturday afternoons. These logistical problems, give or take a run-in with Harvard administrators, are the main obstacles facing Harvard homebrewers.

During the initial brewing stage, when wort is produced and then combined with yeast, things tend to get messy.

After this stage, which Gavin says comprises the brunt of the work, the beer will ferment for a couple weeks before undergoing additional bottle conditioning. The beer needs to be kept in a dark place at a certain temperature, which can pose a problem in Harvard dorms.

“There are two types of beer: ales and lagers. Ales ferment at about 70 degrees, which is more or less room temperature,” Gavin says. “But at Harvard, keeping your room at a very consistent temperature isn’t the easiest thing. It’s a lot of holding a thermometer up at various places in your room until you find the right thing.”

Lagers, on the other hand, are fermented at cold temperatures. Gavin considered building a device that would open his window and allow cold air to come in and cool the batch of fermenting beer, but ultimately discarded the idea. 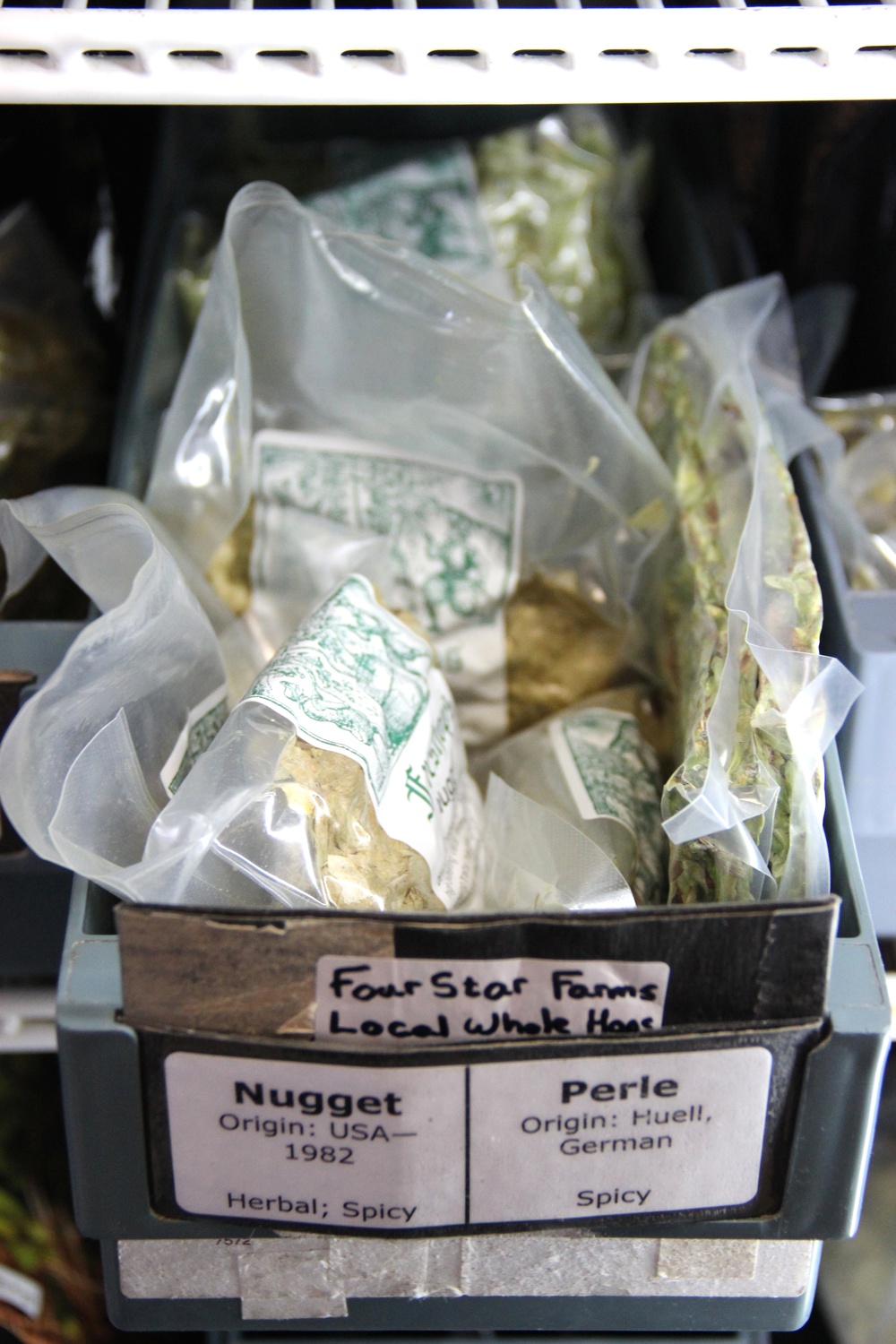 Whole hop flowers on display at the Modern Homebrew Emporium near Davis Square. Hops are used to give beer a bitter and tangy flavor. By Alexander L. Jaffe

“I have spent a lot of time thinking about this,” Gavin says. “But [it] means I would be keeping part of my room at 50 degrees all year round, which doesn’t really make sense. So basically I don’t make lagers.”

About half of Gavin’s beers are Belgian-style ales, including some modelled after Delirium Tremens, which was named the best beer in the world at the 2008 World Beer Championships. Despite his commitment to quality, he admits that students are often dubious of homebrewed beer.

“The big thing is at first getting someone who hasn’t had my beer before to try it without instantly thinking it’s going to be bad,” Gavin says. “A lot of people will say ‘oh my god, you made this? Did you make this in your bathtub?’”

Gavin admits, however, that his beers aren’t always enjoyed in the way he would like. When the cheap beer ran out at one party thrown by his friends, he begrudgingly offered up some of his beer for one final round of beer pong.

“It was very disappointing,” Gavin says. “When you see it poured out into a solo cup and then downed very quickly, there’s something very sad about that.”

Usually, Gavin will ask his friends to pour the beer into a pint glass so that they can better appreciate its aroma. Given the amount of effort he puts into his brews, it’s easy to see why.

“You find yourself toying with the pH of Cambridge water to match it to where it would be somewhere in Europe,” Gavin says. “It gets pretty nerdy pretty quickly.”

“I had a lot of graph paper with me the first time I did this,” Banks says. “Made some sweet phase change charts—you know what I’m talking about?”

Banks, who described himself as a “low caliber beer maker,” takes a more laid-back approach to homebrewing.

“I wouldn’t say I put as much time and effort into it as some more boutique homebrewers do,” Banks says. He likens the more upscale beer drinkers to Comic Book Guy from “The Simpsons”: pretentious, supercilious, and alienating.

“It’s a very exclusive thing these days, very arty, like collecting something,” Banks says. “I don’t like that too much.”

During his time at college, Banks estimates he’s produced about 30 gallons of beer or cider—the latter is “way easier to do.”

“Some batches turn out so poorly that you can only take them to parties and pretend someone else brought them,” Banks says. “Occasionally they’ve been good enough to be the sole focus of an evening.”

Though Banks admits that brewing necessitates lots of advance planning, he doesn’t see the process itself as especially difficult. The biggest obstacle to his homebrewing has been Harvard’s administration. Freshman year, he and a friend tried to brew beer in the Mathews Hall kitchen.

“Obviously, it was very unclear to any of us that alcohol is not permitted anywhere in the freshman dorms,” Banks says. 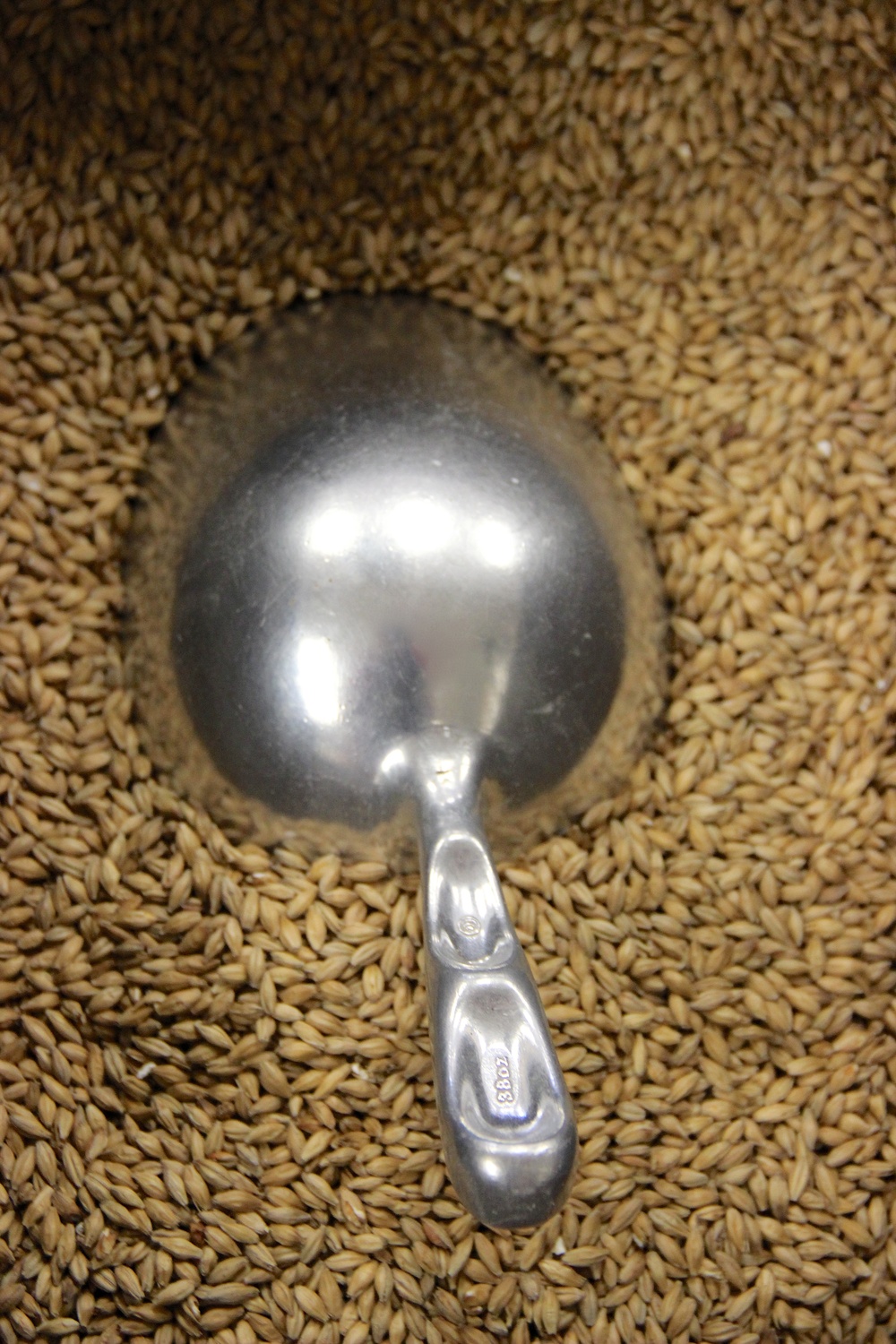 Malted barley for sale at the Modern Homebrew Emporium near Davis Square. These grains provide the sugar that will be fermented into beer. By Alexander L. Jaffe

Armed with ingredients from Homebrew Emporium and a lobster pot from Dickson Brothers, Banks and company started the process on a Sunday afternoon.

“It may not have been the wisest decision on our part,” Banks says.

After taping the instructions to the Mathews kitchen wall, the two began in earnest.

After the unexpected visitor snapped some photos and departed, Banks’ friend explained that he was a Mathews proctor. The two were forced to pour out the beer, even though, as Banks points out, they had not yet added the yeast.

“That was pretty unfortunate,” Banks says. “But we got back on it the following year. Harvard can’t crush ingenuity.”