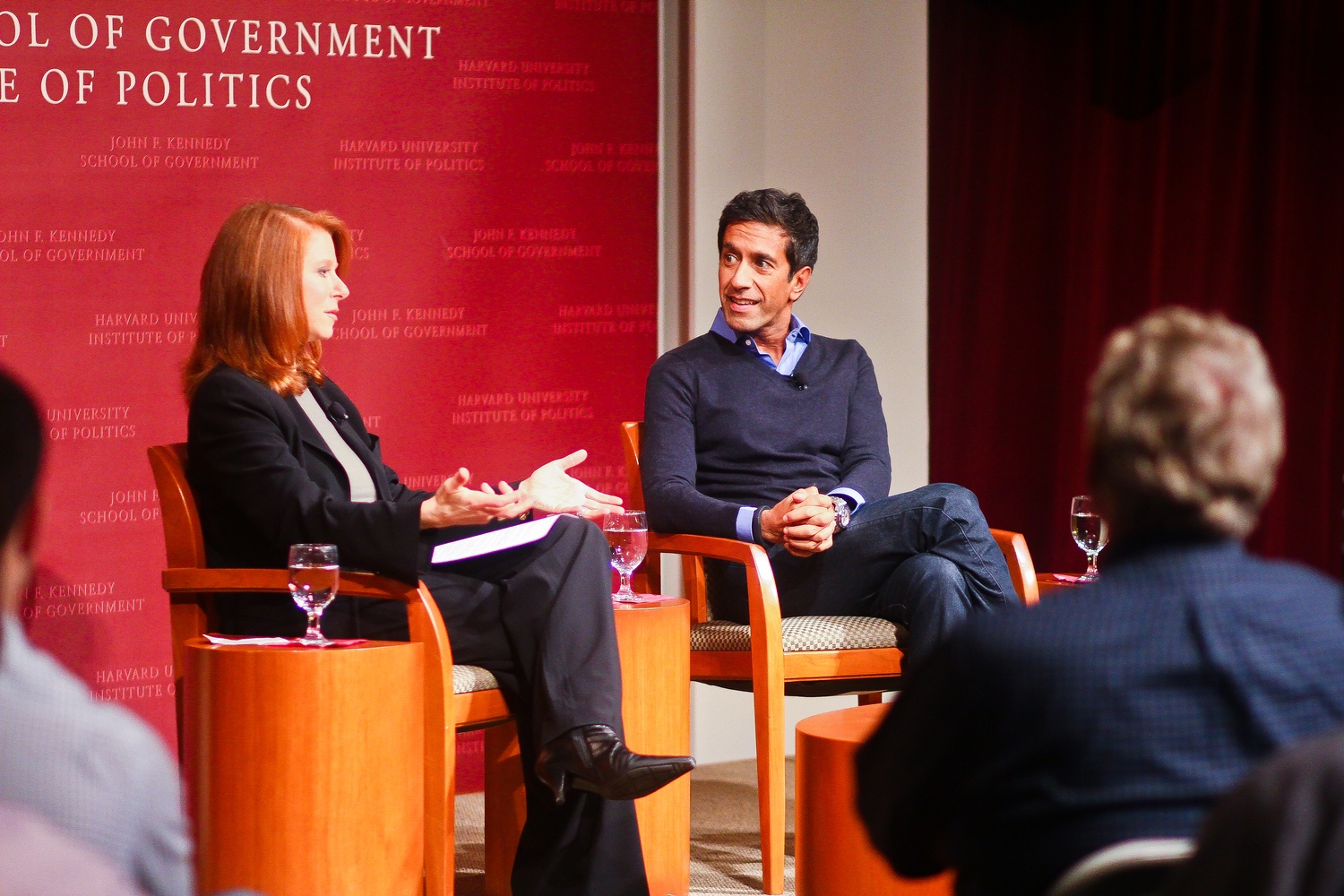 Dr. Sanjay Gupta, Chief Medical Correspondent at CNN, spoke about the potential of medical marijuana during an Institute of Politics forum event on Wednesday evening. The conversation was moderated by Dr. Staci Gruber, an Associate Professor of Psychiatry at Harvard Medical School. By Shunella Grace Lumas
By Luca F. Schroeder, Contributing Writer

CNN Chief Medical Correspondent Dr. Sanjay Gupta discussed the possibilities and challenges in expanding medical marijuana at the Institute of Politics on Wednesday.

The John F. Kennedy Jr. Forum event, moderated by Harvard Medical School associate professor Staci A. Gruber, comes just two days after the Harvard-affiliated McLean Hospital announced a “landmark new program” examining medical marijuana. The program will “explore the potential impact of medical marijuana on cognition, brain structure and function,” according to the announcement, and was funded by a $500,000 gift from best-selling crime writer Patricia Cornwell.

Gupta started off the conversation by discussing his “about-face,” referring to the well-known 2013 CNN column in which he apologized for misrepresenting marijuana to the American public.

“I realized that I had in my own way probably dismissed many patients as malingers who were just trying to get stoned,” Gupta said. “And there are a lot of those people. But there are also a lot of very, very legitimate patients as well for whom not only I realized that medical marijuana was working for them, it was working for them when nothing else had.”

He discussed how he afterwards looked at the evidence and found a “very distorted picture” of marijuana in the medical world, with a disproportionate number of studies “designed to find harm.” Gupta highlighted the stigma around supporting medical marijuana as a major challenge limiting scientific research on the topic.

Gruber then shared a clip from Gupta’s documentary “Weed,” highlighting the story of Charlotte Figi, a five-year-old suffering from severe epilepsy. Charlotte and her family had tried several toxic anti-epileptic drugs—but none of them worked, and Figi was still having around 300 seizures a week.

Medical marijuana was ultimately the solution to Figi’s condition, and, as Gupta emphasized, Figi’s story is “emblematic of [the story] of hundreds of families.”

Families like Figi’s, he pointed out, are “medical marijuana refugees”: they can now gain access to medical marijuana in Colorado but can lose their children and be put in prison for drug trafficking if they attempt to leave the state.

“I think it’s interesting to see how his viewpoint changed,” Zarin I. Rahman ’18 said. “Maybe we all need to be exposed to these families that he was, to maybe change our mind on this as well.”

The important thing to do at this point in the legalization process, Gupta concluded, is to let marijuana, like any other medicine, “stand on its [own] merit scientifically.” When more scientific studies have been conducted, he said, when that “takes away some of the stigma surrounding this [issue], we can more easily get to the point where we can establish the thresholds” for marijuana use.