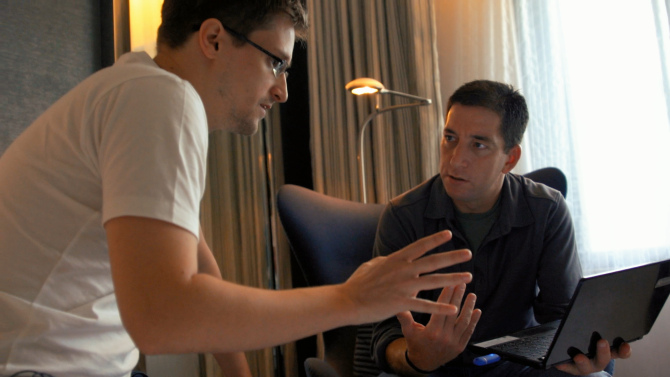 Everyone already knows what happens in “Citizenfour”: Edward Snowden, government-contractor-turned-whistleblower, reveals in no uncertain words that the National Security Agency monitors much of what Americans do on the Internet. Almost two years have passed since the events that “Citizenfour” depicts transpired, and while the film does indeed serve as an exposé, its primary purpose is much different. “Citizenfour” illustrates that Edward Snowden is far from the mythological figure that many make him out to be. In fact, for all of his determination, Snowden is in fact a very reserved and low-key figure with whom the viewer can connect. In that sense, “Citizenfour” is not the story of a country or of an entire world, but an intimate and revealing—albeit tinted—portrait of one man.

“Citizenfour” was filmed and directed by Laura Poitras, whom Snowden contacted in Jan. 2013. After a few months of correspondence, Snowden met Poitras and her colleague Glenn Greenwald in a Hong Kong hotel room. Their conversations over eight days were filmed and comprise around half of the 2-hour-long film. Although this close-up, intimate footage solely consists of Snowden and the journalists, it is incredibly captivating.

What makes this simple dialogue so riveting is not exactly his revelations—they are now commonly known. Rather, it is his quirks and peculiarities that subtly reveal facets of his personality. Snowden is hyper-cautious, even paranoid: he will only type critical passwords while hiding under a blanket (to prevent prying eyes), he unplugs the hotel phone for fear of being recorded, and at the end of the film he communicates by passing notes off-camera and instantly shredding them.

In another vein, it is fascinating to learn about Snowden’s intentions when he leaked millions of top-secret documents. Some might assume he did it for fame—for his name to be known and revered. “Citizenfour” shows that this Snowden believes the contrary. Snowden, Greenwald, and Poitras strategized for days over exactly how to release the documents and if—and when—to reveal Snowden’s identity. Snowden claims to believe in truth for the sake of truth; he wishes for the impending leaks to be more about their content and direct implications than about the personality of then-29-year-old Edward J. Snowden. And while some might consider him a hero, he doesn’t think of himself as one: Snowden declared that he acted to inspire more to follow in his footsteps as a whistleblower. This is one of the most striking points about the film, as it helps add a great amount of either humility or arrogance—depending on the viewer’s stance on Snowden’s morality.

"Citizenfour" explores the motivations and personality of Edward Snowden. By Courtesy of RADiUS-TWC

While the film itself is very convincing, it seems to all be based on a faulty premise. The film’s central goal appears to be to establish that Snowden was a well-intentioned man with honorable values and an actual personality—essentially putting a face to the name. And, ironically, this is exactly what Snowden said he hoped wouldn’t happen. Revealing Snowden’s humility in fact violates it, creating an uneasy dissonance for the watcher. What’s more, the film actually omits a good deal of information that taints the saint-like image of Snowden. Just after the events of the film, Snowden passed information about U.S. activities in China to the South China Morning Post in Hong Kong. In fact, while he is somewhat hesitant to share some documents with Greenwald and Poitras, according to the South China Morning Post, he revealed specific targets which the NSA investigated. Although omitting this information was not necessarily journalistically unethical, “Citizenfour” would have been strengthened by an all-encompassing perspective of Snowden, not a rose-tinted one.

Despite its weaknesses, “Citizenfour” delivers a lasting impression. The intimate perspective afforded by the fact that filmmaker Poitras is actually one of Snowden’s collaborators creates a window into a world of secrecy. By showing that Snowden is a real human being, “Citizenfour” polarizes the viewer’s opinion of him. Those that believe he was justified will recognize him as a humble man dedicated to truth; those that take him for an agent of espionage will only be infuriated. Regardless, “Citizenfour,” while not one of the most well-made documentaries of this decade, is perhaps the most important and iconic one of our time.

—Contributing writer Patrick H. Pan can be reached at patrickpan@college.harvard.edu.