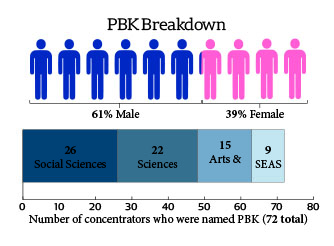 The names of 48 seniors elected to Harvard’s Phi Beta Kappa chapter were released Monday by Jeffrey Berg, assistant director at the Office of Undergraduate Research and Fellowships.

Election to the Senior 48 list is based largely on an individual’s academic performance as well as courseload difficulty and diversity. The selection follows the announcement last spring of the society’s Junior 24 list, which recognized two dozen members of the Class of 2015 for extraordinary academic achievement.

Five of the seniors concentrate in Social Studies, which was the most common major among the inductees. Yet many of the seniors elected are sole representatives of their concentration, including inductees from English, Physics, and African and African American Studies, among others. Inductees from Kirkland and Quincy Houses outnumbered those from other Houses, with each House contributing seven students each.

“It’s such a thrill,” said Merrill H. Lutsky ’15, an applied math concentrator in Eliot. “Just to be considered among [people who are] so fantastically talented is such a great honor and highlight of my time here. I never really set out to do this, but it was more of something that fell into place term after term. I don’t think you should set out to optimize your concentration for your GPA.”

“What I love about people that study creative writing at Harvard is that they do so much more beyond it and they can integrate other studies into creative writing work,” Robinson said. “People don't often realize all of these [concentrators] who are doing creative writing theses are also studying physics and doing the pre-med track and taking economics classes.”

Many students traced their success back to the classroom and campus. Sharon Zhou ’15, a joint classics and computer science concentrator, attributed much of her achievements to those around her.

“I feel like people underestimate the impact of other people on themselves,” Zhou said. “Without the influence of professors, without being surrounded by particularly insightful and talented friends, I probably wouldn't have been able to do what I have. When I got [the email notifying me of my selection] I felt like, ‘This is a representation of how great the people around me are.’ I did well in school because I was really inspired by the people around me.”

Despite the prestige of the selection, some students were ambivalent about what their election to the chapter actually means.

“I think it's an honor to be able to get [elected], but I'm not sure what exactly it signifies. It doesn't prescribe my success for the future,” said Yuechen Zhao ’15, a computer science concentrator in Leverett.

A complete list of the members of the Class of 2015 elected to the ‘Senior 48’ is below:

Petey E. Menz, History of Art and Architecture and English

Nora W. Wilkinson, History of Art and Architecture and English

An eralier version of this article incorrectly stated the name of African and African American Studies concentrator Samuel "Gus" Ruchman.