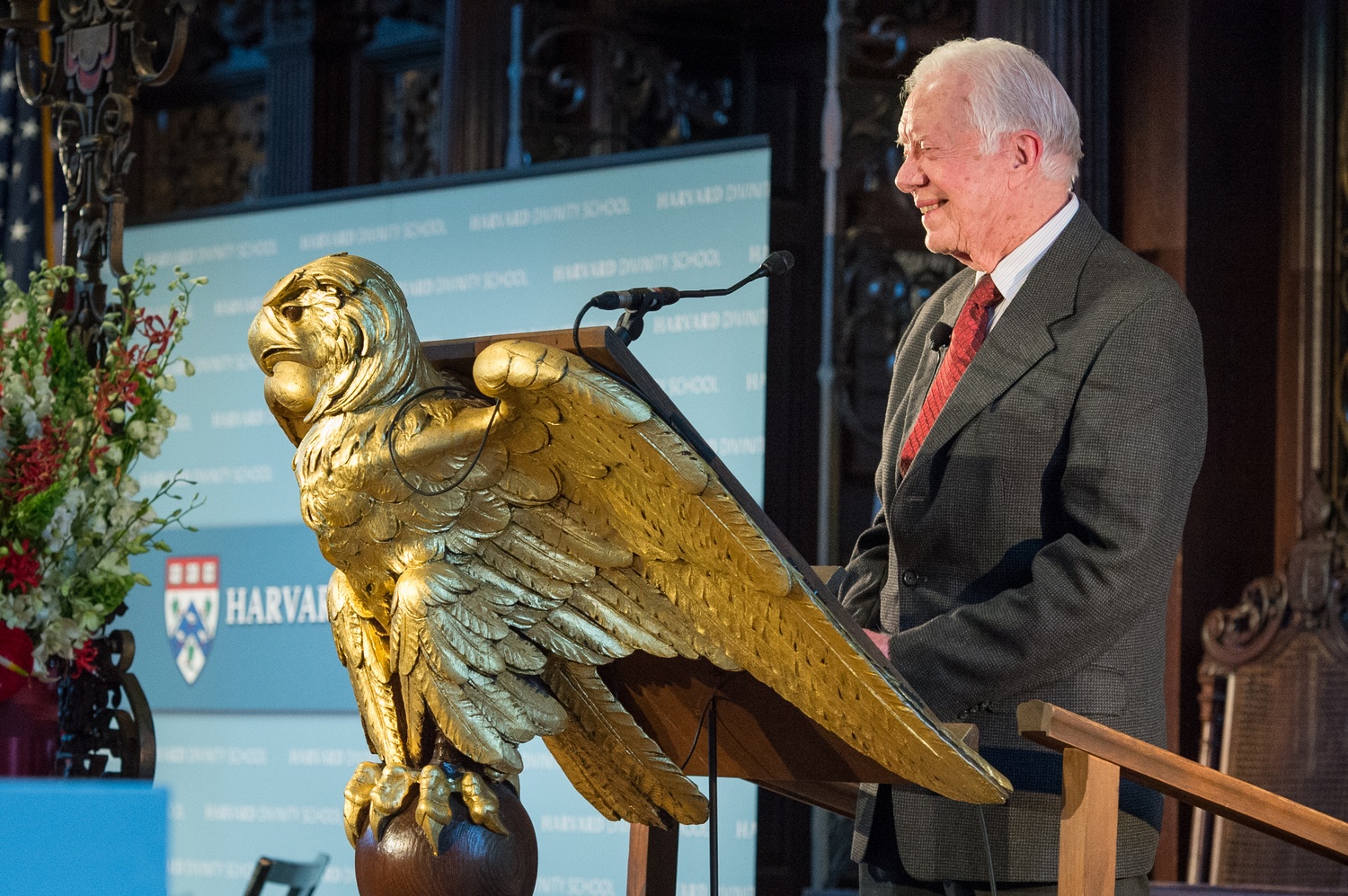 Former U.S. President Jimmy Carter discussed the issues facing women during an event hosted by the Divinity School at Memorial Church on Tuesday. According to Carter, the maltreatment of women is the “most horrendous” human rights issue in the world today.

“There is [a parallel between] the way black people were treated in some parts of the country when I was a child to the way women and girls are treated all over the world now,” said Carter, the 39th president of the United States and 2002 Nobel Peace Prize recipient.

Carter’s remarks come after a year in which sexual assault has been a major topic of discussion on college campuses. Earlier this year, Harvard released new standards for how reports of sexual assault will be investigated, creating a central office to look into cases. And this fall, a Columbia protest against sexual assault, which entailed an alleged victim carrying a bed around campus, spread to Harvard.

“We tend to distort the truth in order to benefit ourselves,” he said. “And that doesn’t just include people who are persecuting others, but also people who sit quiet while others are persecuted.”

The talk was part of his publicity tour for “A Call to Action: Women, Religion, Violence, and Power,” a book which addresses the discrimination facing women across the world today.

“It’s amazing to see this issue brought to the forefront by one as influential as President Carter,” said Kathryn M. Barker, a student at the School of Public Health who was in attendance. “I was very impressed with [his discussion] about the ways in which women are negatively affected across the world, not just in the United States.”

Farah Qureshi, another student at the School of Public Health, agreed but also stressed the value of Carter’s remarks for discrimination in the U.S. as well.

“In the United States we need to face the reality of what’s going on here and not turn a blind eye to it,” she said. “It’s especially relevant to universities [in terms of sexual assault.]”

The ceremony featured Jonathan L. Walton, Pusey Minister of the Memorial Church, and David N. Hempton, dean of the Divinity School, both of whom gave introductions. The program concluded by recognizing the first recipient of the Jimmy Carter Scholarship for the Divinity School, Karlene Griffiths Sekou.

“I am deeply humbled and honored to receive the award,” she said. In terms of her work with human rights, she said, “I firmly believe we are one human family, and we are only as good as the least of us.”

He left attendees with a call to action.

“[Ask yourself] what can I do personally to alleviate the horrendous persecution and discrimination and punishment and murder of my fellow human beings who happen to be female?” he said. “I don’t know of a...single human rights cause more important than this.”

An earlier version of this article misspelled the name of the first-ever Jimmy Carter Scholarship recipient, Karlene Griffiths Sekou. The article also incorrectly stated the school in which attendee Farah Qureshi is enrolled. In fact, he is a student at the School of Public Health.