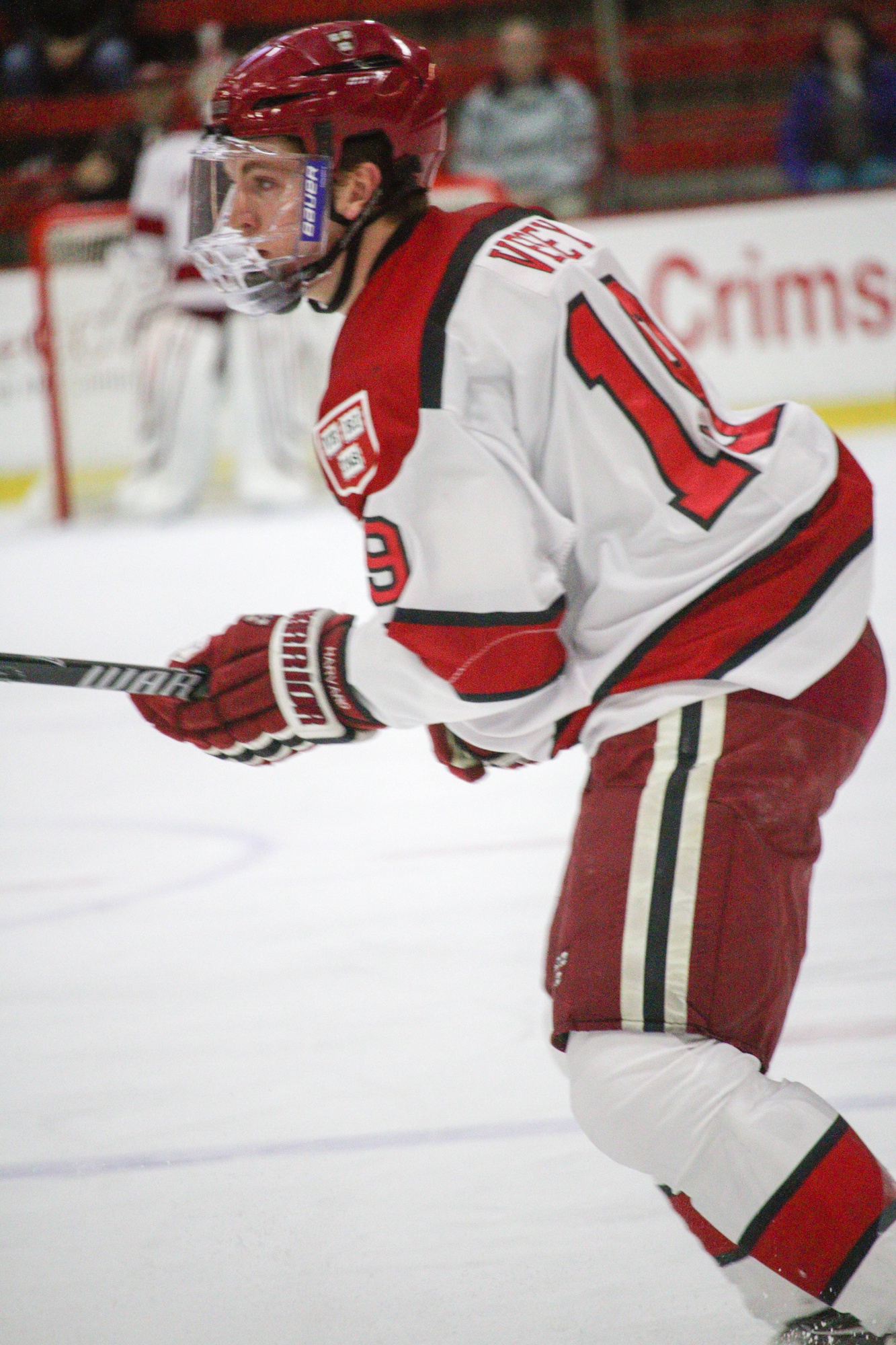 Three teams from Massachusetts stand in front of the Harvard men’s ice hockey team in the national rankings. With Saturday night’s win, the Crimson has now taken them all down this season.

Led by solid performances from its sophomores—including two goals from sophomore forward Luke Esposito—No. 18 Harvard emerged victorious over No. 4 UMass-Lowell, 4-2, at the Paul E. Tsongas Center. The last two games have seen the Crimson topple two opponents ranked in the top five nationally.

“Putting together these wins has been an excellent feeling,” sophomore forward Luke Esposito said. “We’re going into every game feeling that we can win…. We can compete with anyone.”

UMass tried to clear the defensive zone, but Harvard sophomore defenseman Clay Anderson was able to corral the puck before it left the zone. Anderson darted for the net and put it past goaltender Jeff Smith to give the Crimson what would end up being the game winner. Esposito’s second goal of the night—an empty-netter with two minutes left—secured the victory.

Harvard also converted on another of its five power play opportunities of the night. Nearly halfway through the first period, junior forward Jimmy Vesey fired a shot wide of the net off a faceoff win by classmate Kyle Criscuolo, but the puck bounced fortuitously to sophomore forward Tyler Moy, who jammed his fourth goal of the year past Smith to put Harvard on the scoreboard first. Harvard’s 31 percent conversion rate on the power play leads the ECAC.

UMass-Lowell responded to this first goal with one of its own less than two minutes later. Freshman C.J. Smith was able to snip a goal over the shoulder of junior goaltender Steve Michalek to knot the game at one goal apiece.

Esposito’s first goal of the night put the Crimson up again. After junior defenseman Patrick McNally went to the penalty box to nix a Crimson power play opportunity, junior forward Brian Hart picked up the slack, finding open ice toward the net and sending a pass across the ice to the sophomore who slipped it past Smith.

The offense overshadowed the overall defensive effort of the Crimson on the night. The back lines only allowed 17 shots on goal from the River Hawks, of which Michalek was able to save 15. Harvard ranks second in the conference in goals allowed, conceding an average of just over a goal and a half per game.

“I thought we shut them down pretty well defensively and executed our game plan,” Esposito said.

One of these goals came in the beginning of the second period after a holding call on freshman Wiley Sherman put Harvard down a man. Less than 30 seconds later, C.J. Smith beat Michalek for the second time of the night to pull even with the Crimson.

Masked by Harvard’s recent success is the fact that the team’s penalty kill has struggled in its past three contests. After going its first seven games without conceding a power play goal in 24 attempts, special teams have now allowed three goals of this ilk in the last three games.

But Anderson’s goal once again broke the tie in the Crimson’s favor and stopped the River Hawks, an unfamiliar foe for the Crimson. Despite both being based out of the same state, the two have only faced off once in the past decade—a 5-0 blowout win for UMass-Lowell.

The Crimson now boasts a four-game winning streak, which the team has not strung together since Feb. 2011.

“I think we’re a much more confident team [than last year],” Esposito said. “It’s a huge influence going into every game when you know you can win. You play harder, and you play stronger.”