Close Races Hard to Come by in Cambridge 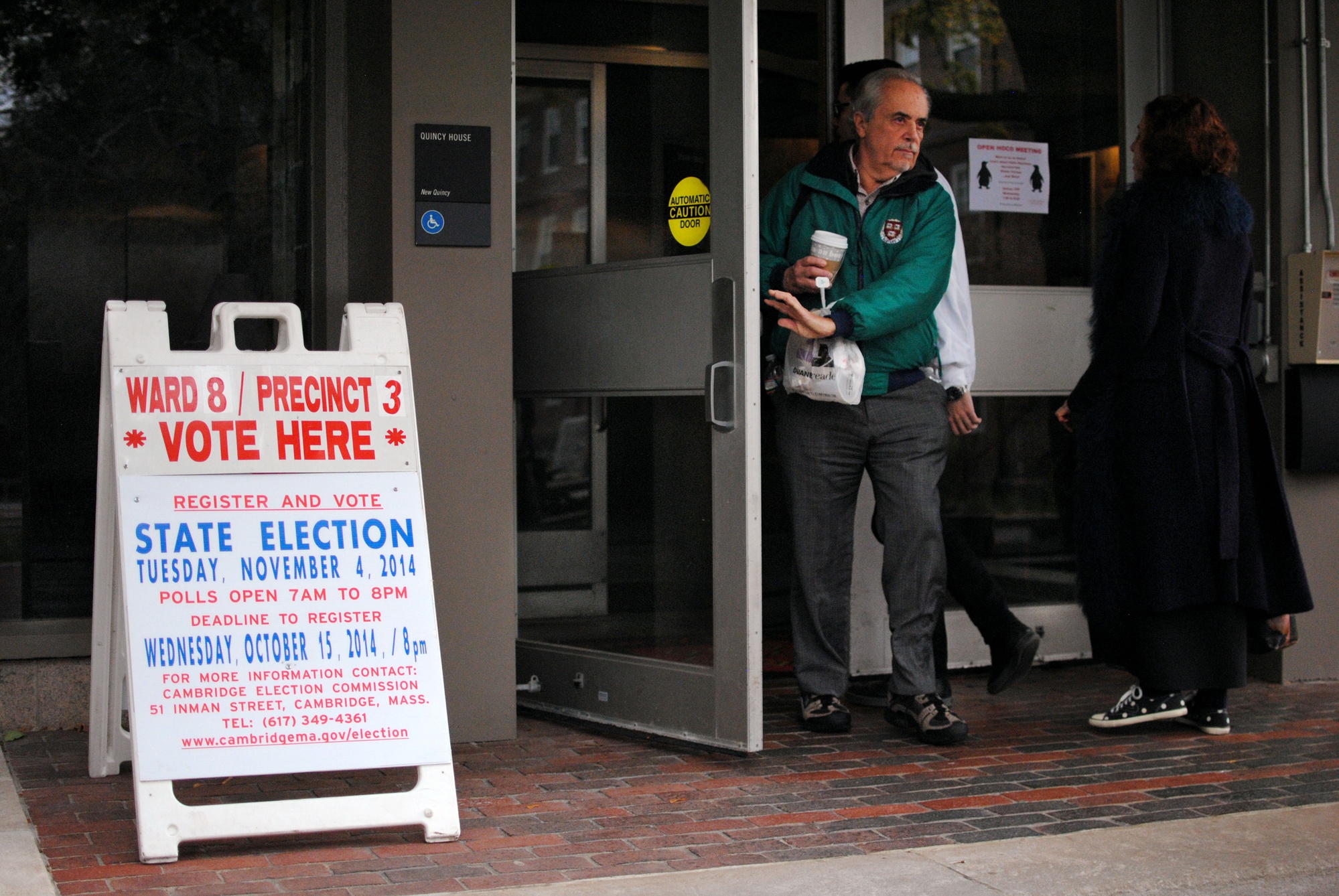 Members of the Harvard-Cambridge community come and go at the polling station in the lobby of Quincy House Tuesday afternoon.
By Karl M. Aspelund, Crimson Staff Writer

Cantabrigians entering voting booths around Harvard today can expect to cast ballots that will determine a contentious gubernatorial race and some ballot measures. The other races on the ballot are less contested with many incumbents widely expected to cruise to victory. 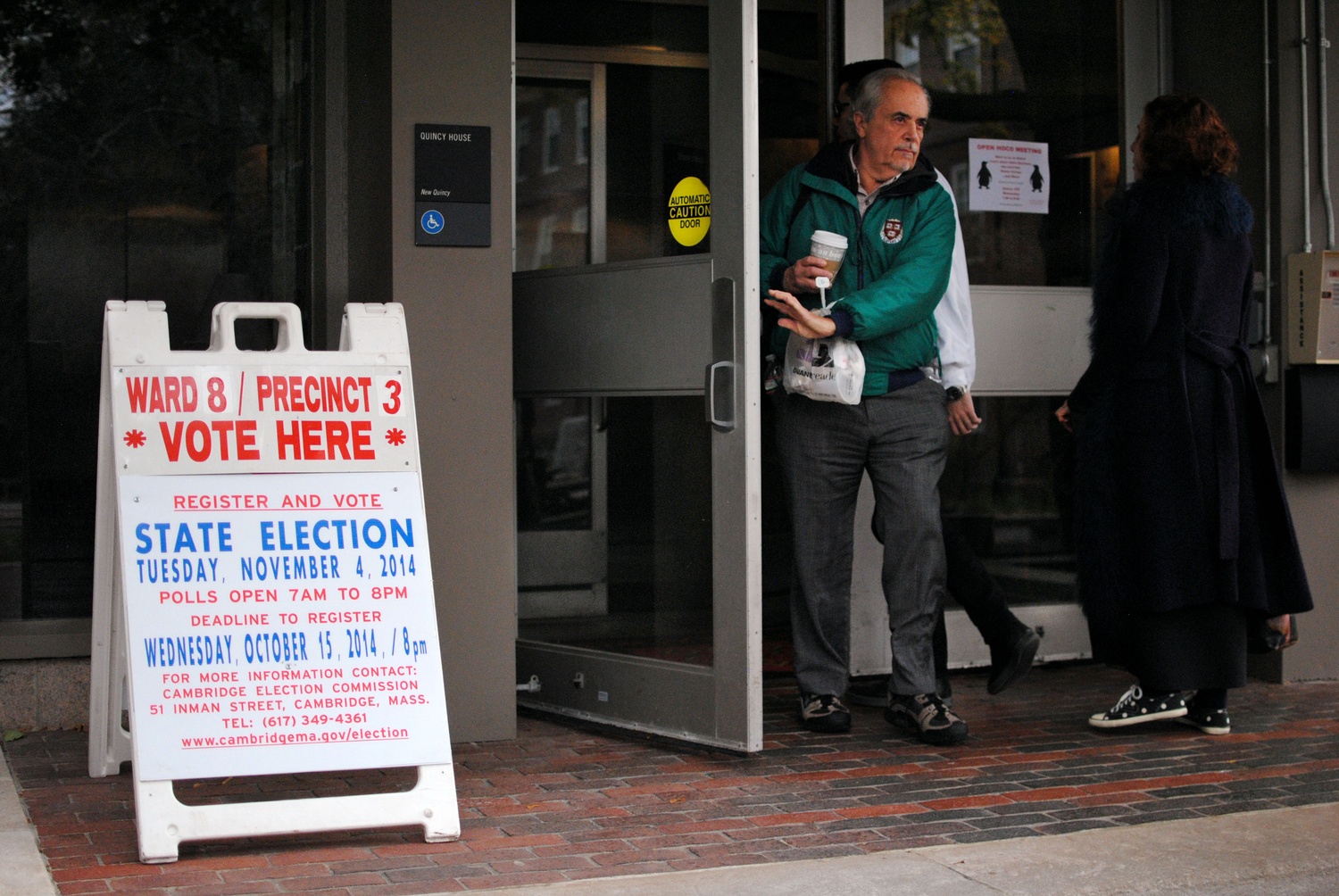 Members of the Harvard-Cambridge community come and go at the polling station in the lobby of Quincy House Tuesday afternoon. By Tiana A Abdulmassih

As voters check off names down the ballot, they will find most local races either uncontested or, in the case of statewide positions, clearly in Democratic hands, but analysts expect that each vote will matter in the Massachusetts gubernatorial election and Question 1 of the ballot initiatives.

The ballot begins with the choice for the United States Senate. After winning a special election last year to fill current Secretary of State John Kerry’s vacant seat, Democratic incumbent Edward J. Markey now holds a comfortable lead over his Republican challenger Brian Herr and will likely kick off his first full term.

Next on the ballot is the highly anticipated Massachusetts gubernatorial race. Both Republican Charles D. Baker ’79, a former health insurance executive and government official, and Democrat Martha M. Coakley, the state attorney general finishing her second term, are looking for political redemption after losing close elections in 2010. Baker lost his gubernatorial bid to Deval L. Patrick ’78 and Coakley her Senate bid to Scott Brown.

Baker’s campaign has emphasized his professed management expertise, while Coakley has run on her commitment to liberal values. Polls in recent weeks have given Baker a lead over Coakley—a startling turnaround since last spring, when Coakley held substantial leads over potential competitors.

A Baker victory would not be novel in Massachusetts. Even though it is one of the most reliably Democratic states in presidential and congressional elections, Republicans won four consecutive gubernatorial races in the Bay State from 1990 to 2002.

If successful, Coakley would be the first elected female governor in Massachusetts history.

For the statewide offices that follow the governorship on the ballot, Democratic candidates are expected to sweep the board. Democrat Maura T. Healey ’92 is noted for her efforts on civil rights litigation and will likely become the first openly gay attorney general in the United States.

Voters will next encounter Cambridge-specific positions on their ballot, where most incumbents are running unopposed. Non-races include the contests for U.S. Representative for the Massachusetts 5th District, State Senator, State Representative, and District Attorney. The remaining two local positions—Councilor and Register of the Probate—have incumbents likely to coast to victory.

The four questions at the bottom of the ballot have sparked controversy this election cycle, even finding their way often into gubernatorial debates.

The first question involves repealing a 2013 law that tied the state gas tax to inflation rates, thereby making the state tax that funds road and bridge reparations automatically increase every year. Baker took a firm stance against the law as taxation without representation, although proponents of the law see it as an assurance that state infrastructure can be maintained. Voting yes would stop the indexing of the gas tax. It is the only ballot question where polls remain inconclusive as to the result.

The next two initiatives have faced concentrated opposition campaigns financed by business interests. Question 2 would expand the state’s bottle deposit law, which advocates argue has succeeded in reducing litter, to cover all non-alcoholic and non-carbonated drinks. It would add a nickel to the price of many more bottles that could be redeemed if the bottles are brought to a recycling facility. Question 3 would repeal a 2011 law permitting casinos within Massachusetts.

The opposition campaigns seem to have succeeded: recent polling suggests a majority of Bay Staters will vote no to both, thereby preventing the expansion of the bottle bill and permitting gambling facilities to operate. A “yes” majority on Question 3 would allow plans for a large casino near Springfield to continue.

Question 4 is the last item on Cantabrigians’ ballots. It would guarantee Massachusetts workers the right to earn and use sick time and is very popular among likely voters. Baker opposes the measure, while Coakley’s campaign has emphasized her support of the initiative.