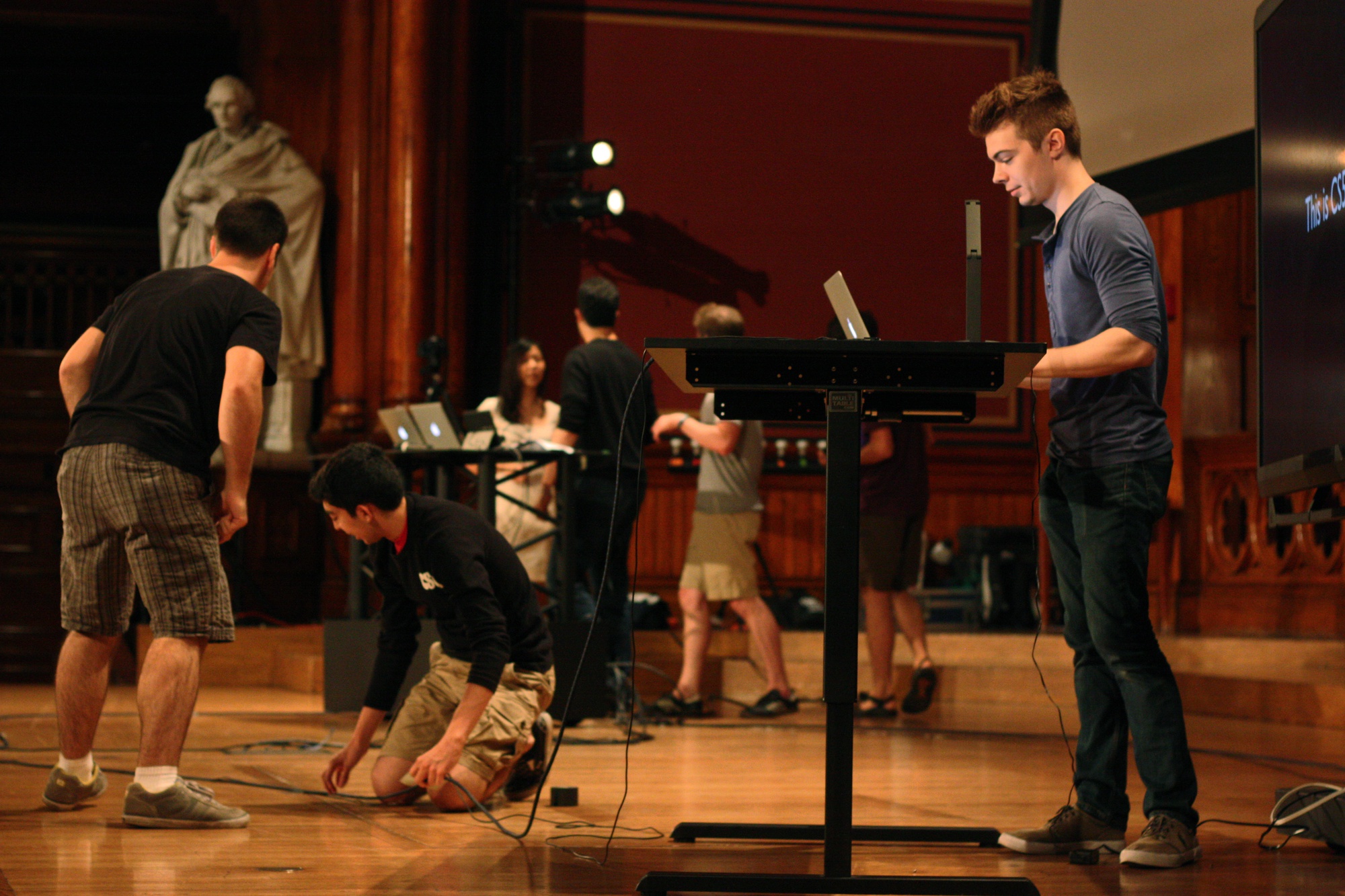 Students on the CS50 production team put finishing touches on the stage setup at the first lecture of the school year.
By Meg P. Bernhard and Michael V. Rothberg, Crimson Staff Writers

On Thursday afternoon, Yale faculty will vote on a proposal to adopt a version of Computer Science 50: “Introduction to Computer Science I” for the fall of 2015, potentially bringing to New Haven the intellectual content of Harvard’s most popular undergraduate course.

But the arrangement, if approved, could also lay the foundation for a new model of inter-university curricular partnerships in an era of institutional experimentation with online education, faculty and experts in the field say. 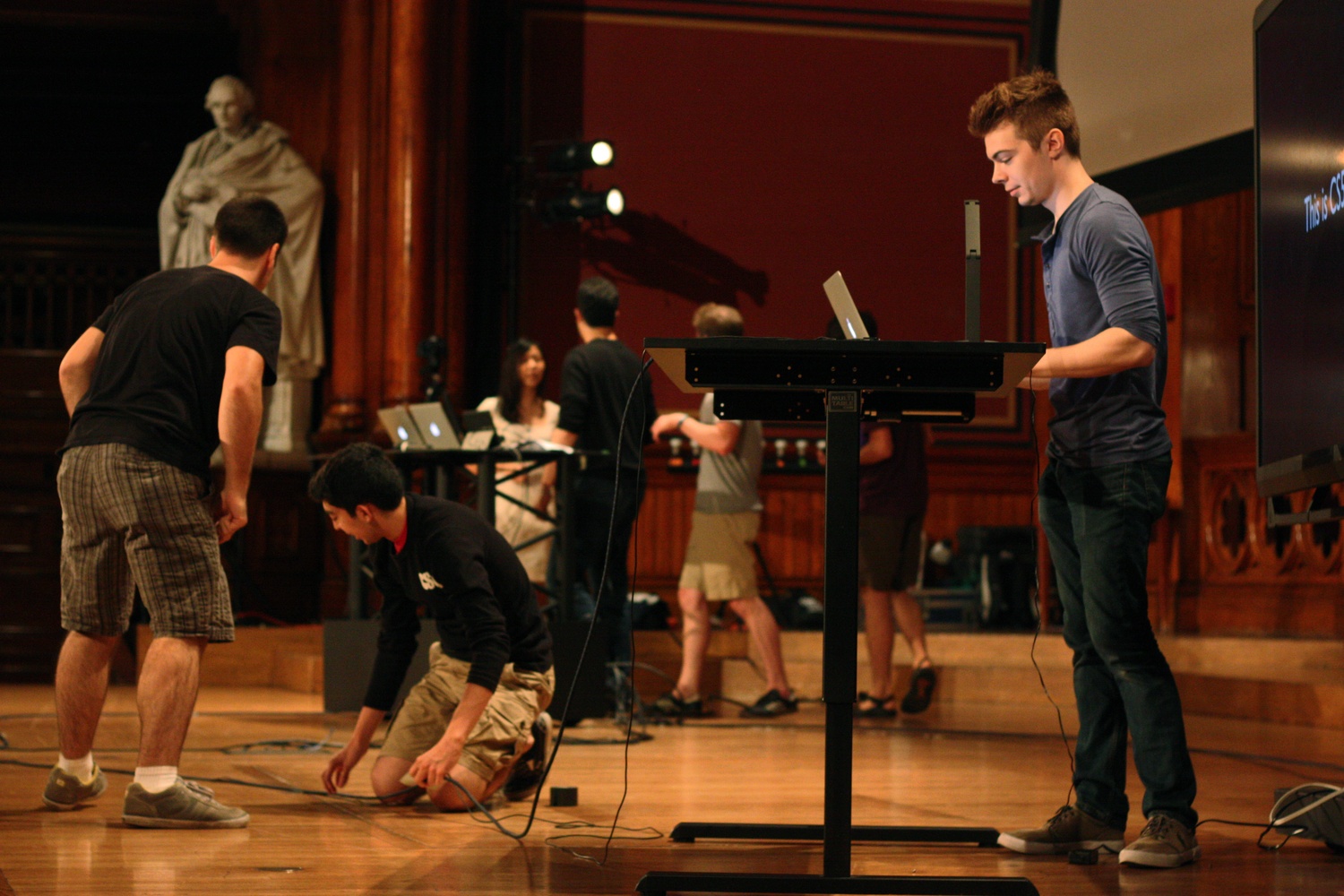 Students on the CS50 production team put finishing touches on the stage setup at the first lecture of the school year. By Connie Yan

Though the exact format and terms of the exchange have yet to be ironed out, Yale Computer Science Department chair Joan Feigenbaum ’81 said informal proposals have called for the live streaming of CS50 lectures delivered by David J. Malan ’99 in Cambridge to students in New Haven. The course, already approved on Oct. 16 by Yale’s Course of Study Committee for a three-year trial period, would be led by an on-the-ground instructor and Yale support staff, who would hold office hours and sections in a sort of “joint Harvard-Yale CS50,” according to Feigenbaum.

Academic collaboration between campuses, of course, is far from unprecedented, but the proposed course sharing may represent a modernization of older resource-sharing models such as textbooks or guest lecturers, faculty members and experts say.

Justin Reich, a HarvardX research fellow, said that there are two ways to think about how a university might use a MOOC: as a full, adapted course, or as learning material intended to supplement an educational experience.

Faculty Director of HarvardX Robert A. Lue agreed, saying that the course could be, in some ways, the equivalent of Yale using a textbook written by a Harvard faculty member.

“The degree to which this is not a more technological, perhaps interactive version of that idea remains to be seen,” Lue said, adding that HarvardX was not involved in discussions to bring CS50 to Yale. “It’s a sharing of a pedagogical framework.”

The analogy, though, has its limits. Where textbooks can supplement existing courses, the proposed arrangement suggests the importation of a series of lectures closer to a course itself.

Malan wrote in an emailed statement this week that he expects to present a clear plan for a potential project in December. A joint venture would likely need the approval of Harvard’s faculty.

Regardless of the collaboration’s finer details, faculty members and experts agree that the exploratory nature of the proposed project itself could catalyze other partnerships and experiments across higher education. 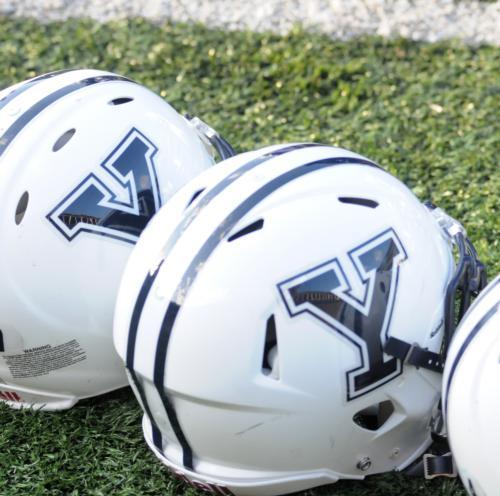 “Nobody really has any idea where all this is going, but it appears to be creating a lot of potential and interesting new directions that haven't been possible before,” said Gary King, a University professor who was integral in the founding of edX.

Ray Schroeder, the associate vice chancellor for online learning at the University of Illinois at Springfield and an expert in online education, said the development may lead to emulation by other universities.

“I expect that we are going see quite a bit more of this at all levels of education,” Schroeder said. “Now, one would hope that there would be reciprocity and that there would be a Yale course or two that would have interest at Harvard, and it would be great to see several courses going in each direction in this kind of agreement.”