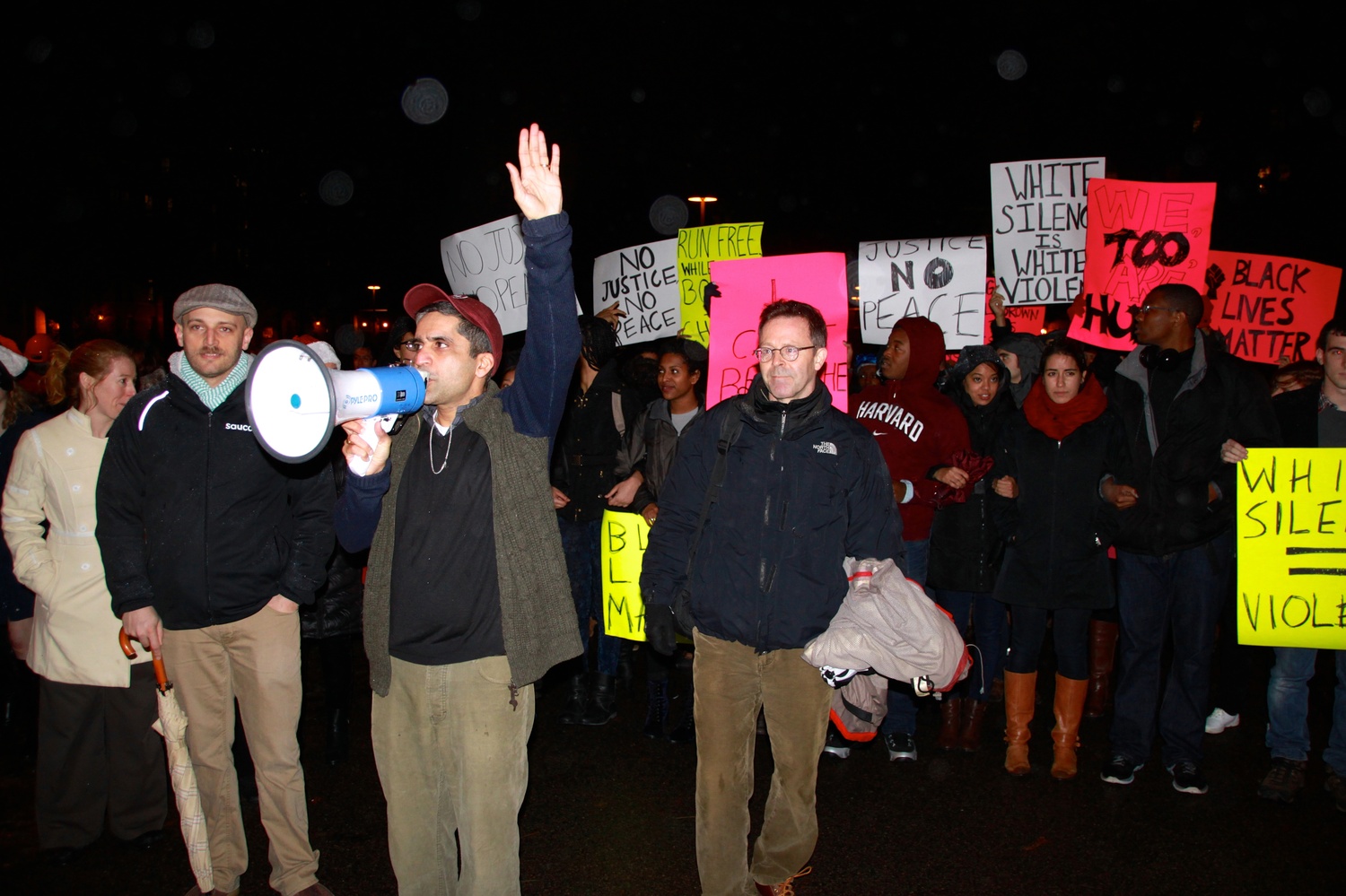 A group of about 30 students attempted to hold a silent demonstration in the first minutes of Primal Scream, a biannual naked run around Harvard Yard, early Thursday morning, inadvertently leading to a chaotic exchange of words and gestures that reversed the usual direction of the run and left many questioning the significance of the heated interaction.

The run is a College tradition in which students, at times inebriated, run naked around the Yard on the eve of the first day of exams. It usually attracts more than a hundred participants.

Protesters said that their goal was not to protest Primal Scream itself, but to hold a four-and-a-half minute period of silence before the run for Michael Brown of Ferguson, Mo. and Eric Garner of New York—two unarmed black men who were killed by white police officers this summer—and to join in solidarity for people around the nation who have experienced racism. The organizers of the demonstration had posted a Facebook event describing their plans for the protest ahead of the event.

While protesters said they felt ignored and angered by the actions of Primal Scream participants, several students in the run said they could not see nor hear the protesters because of the noise and nature of the gathering, with some saying they would have participated in the protest if they had known about it in advance.

About ten minutes before the intended start of the run at midnight, the group of protesters convened near Harvard Hall on the path encircling the Yard and held signs, one of them reading “Black Lives Matter.”

About 25 College administrators, including Dean of the College Rakesh Khurana and Dean of Freshmen Thomas A. Dingman ’67, were present in the surrounding area before the run began, and a few stood near the protesters to ensure that both the moment of silence and the run could take place safely, according to Dingman. Dingman said he had met with the Harvard Band in advance and asked that they not play during the moment of silence.

As student streakers began to gather, talking and shouting, just a few yards away, the protesters, some of them clad in black sweatshirts with the words, “I ♥ Black People,” stayed silent. After failing to quiet the students with a megaphone, Khurana was lifted onto the back of a half-naked man, from where Khurana tried to quiet the crowd again. 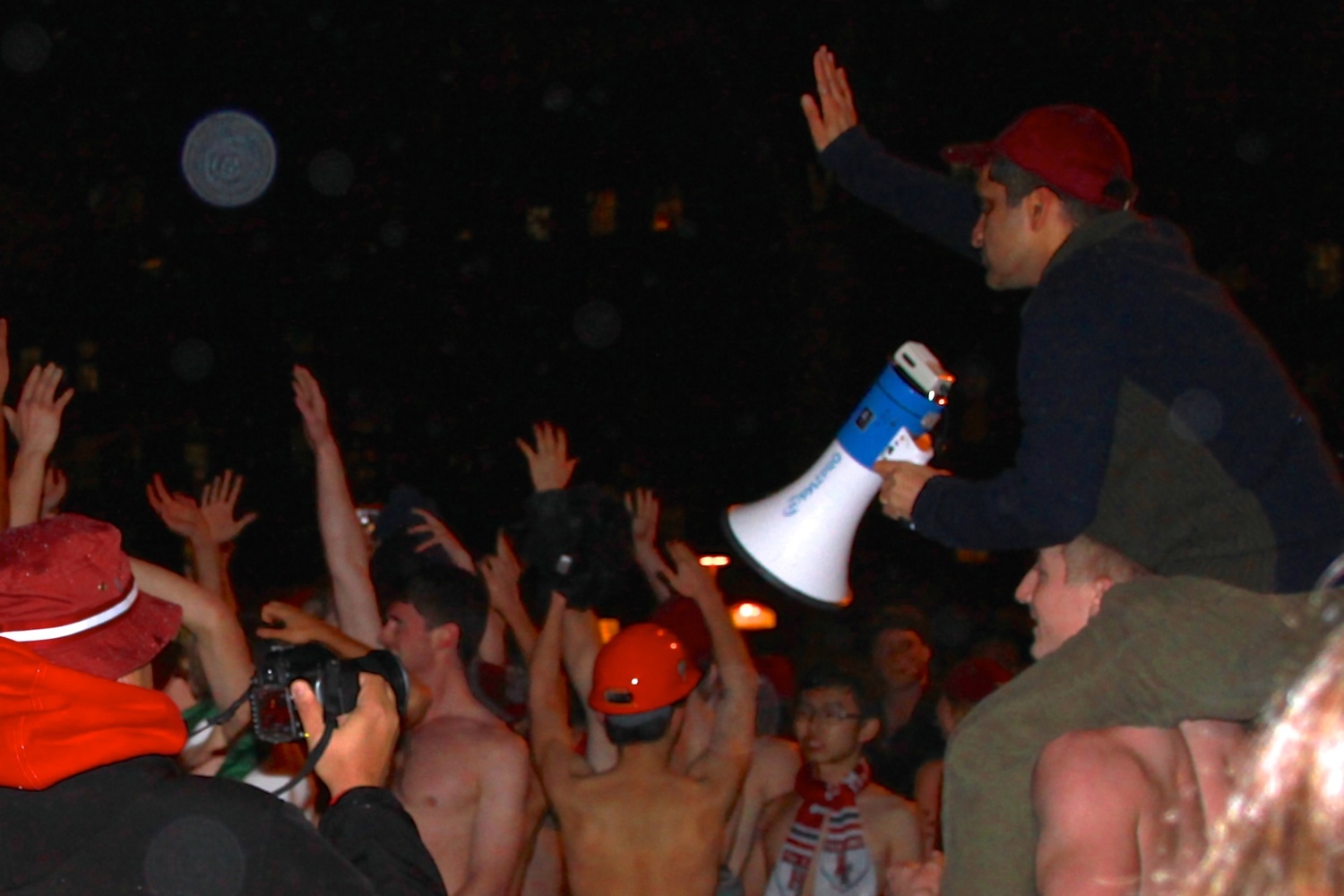 Dean of College Rakesh Khurana attempts to gain the attention of the participants of Primal Scream by climbing onto the shoulders of a Primal Scream runner in December in Harvard Yard. Other students organized a protest, in response to recent grand jury non-indictments, that attempted to delay the start of the run. By Mac G Schumer

After the runners dispersed, the protesters walked to Lamont Library, shouting slogans common to the widespread protests of recent weeks, such as “No justice, no peace.” After walking up several floors in the library while chanting, the protesters reassembled in the Lamont lobby, as Khurana looked on. 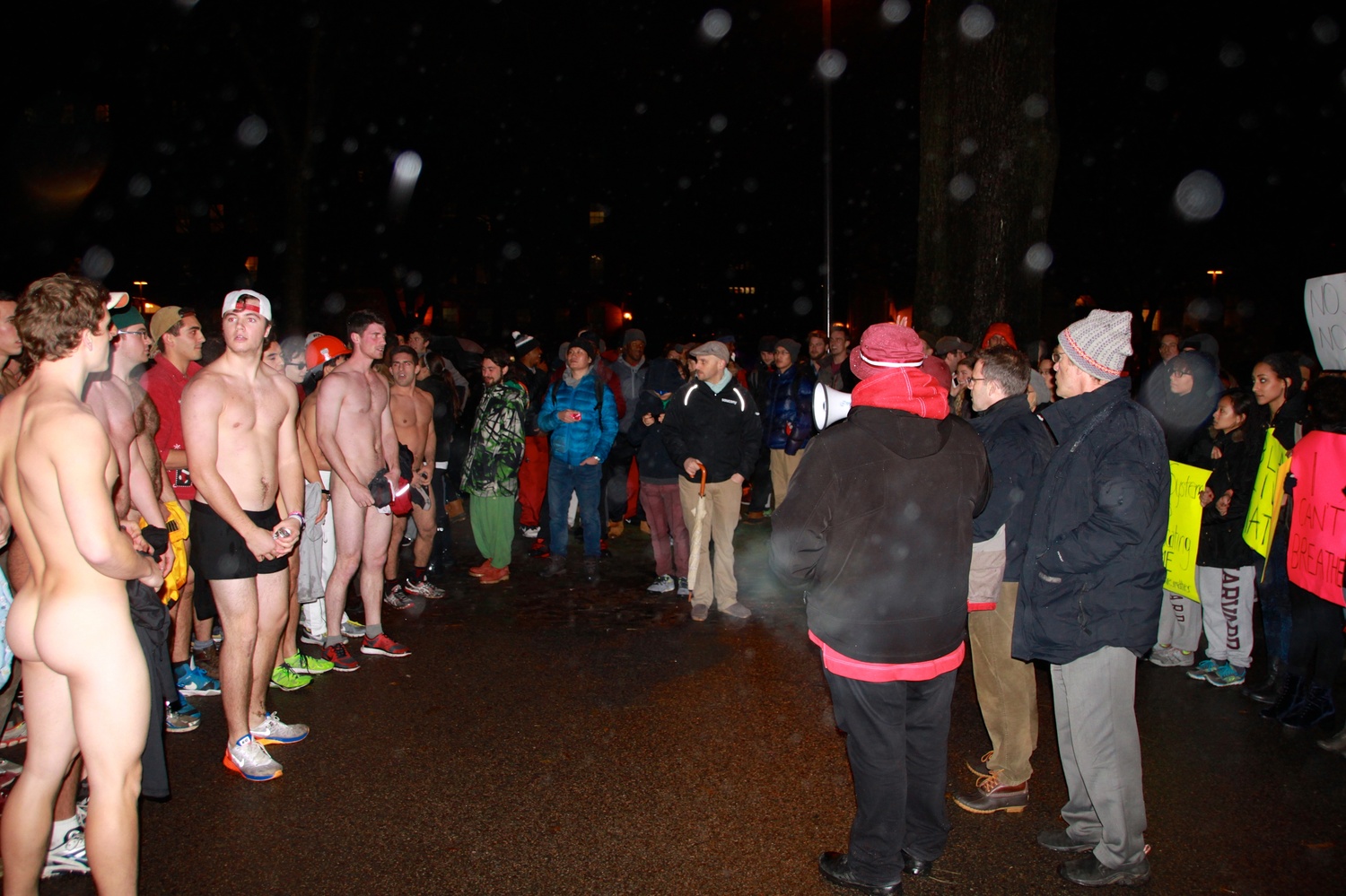 Addressing the crowd, Walker and Sarah F. Cole ’16, another protester and president of the Black Students Association, expressed frustration that the silent demonstration did not go as planned.

“I know that people are tired,” Cole said. “But it’s important that we keep rallying, keep pushing.”

“Tonight we said black lives matter, and they really do,” Walker said. 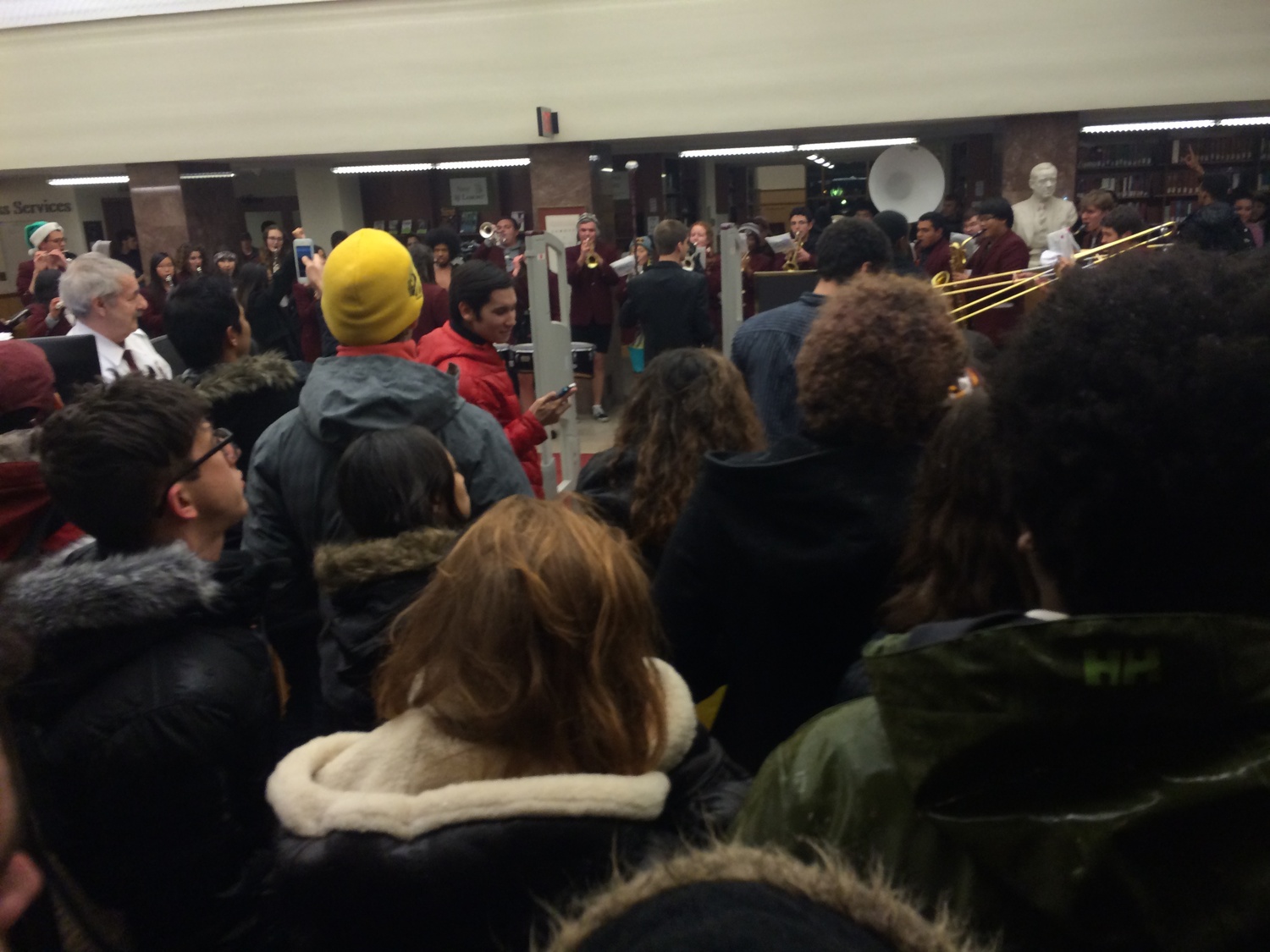 Protesters and members of the Harvard Band crowd the foyer of Lamont Library early Tuesday morning after the protesters tried to delay the start of Primal Scream with a moment of silence for victims of racial violence. By Samuel E. Liu

Members of the protest said that they were upset by the reactions of the student streakers.

Amanda D. Bradley ’15, who helped organize the protest, said that while she did not know the intentions of the primal screamers, she felt disgusted by what they were chanting.

“For people to say black lives matter, and for the crowd to shout back ‘U.S.A.,’ which is upholding a system that is oppressing black people, I think that that is problematic,” she said.

Sasanka N. Jinadasa ’15 said she was appalled by what she called a disrespect both for Khurana and the protestors.

“I think that for many students of color, particularly black students, there’s always a fear of what white retaliation looks like,” she said, citing obscene gestures and language toward protesters.

Keyanna Y. Wigglesworth ’16, another protester, said she was “disturbed” and “angered” by reactions to the protest, especially from those in the front of the crowd of streakers who she believed could hear the calls for silence.

Meanwhile, some students participating in the run said they were confused by the demonstration and unaware that it was taking place.

Emily Savage ’15, a runner, said she did not know that a protest was occurring.

“It killed me that I had no knowledge of the four-and-a-half minute silence,” she said. “And I think I speak for so many students when I say that it's so unfortunate [that we didn't know it was happening].”

Skip L. Rosamilia ’17, a Primal Scream participant, said that he could not hear or see through the crowd of streakers.

“I’m sad because it...look[ed] like there was one group who was for [the demonstration] and a huge group that wasn’t, and I don’t think that was the case,” he said, calling the interaction between the protest and the streakers a “huge egregious misunderstanding.”

Khurana also said many runners told him that they would have joined the protesting students if they had known about the demonstration.

“I think what it was, is just...a tight physical space and a relatively loosely structured event without actually clear planning,” Khurana said, noting that it was difficult for him mediate between the two groups of people.

Some students voiced similar concerns before the demonstration on the Facebook post for the event, saying that the protest would be disruptive to the College tradition of Primal Scream and potentially would risk student safety. As a result, organizers posted an update on the protest’s Facebook page saying that they had changed the nature of the protest from a die-in to a moment of silence out of safety concerns and in an effort to preserve the Primal Scream tradition.

Though Walker, one of four principal organizers of the protest, acknowledged Thursday afternoon that there “was some confusion as to what was going on and not a lot of individuals knew what was happening,” he said he thought the protest was a success.

“The event was successful because it started a conversation in communities that haven't been talking about this.”

The Primal Scream protest is the latest in a string of protests in reaction to the non-indictments of the white police officers in the Brown and Garner cases. Students from the College and graduate schools, as well as the Boston community, plan to march in the Yard on Friday in solidarity with the Black Lives Matter movement. Close to 1,400 individuals had RSVPed to the march’s Facebook page as of four p.m. Thursday.

—Staff writer Theodore R. Delwiche contributed to the reporting of this story.