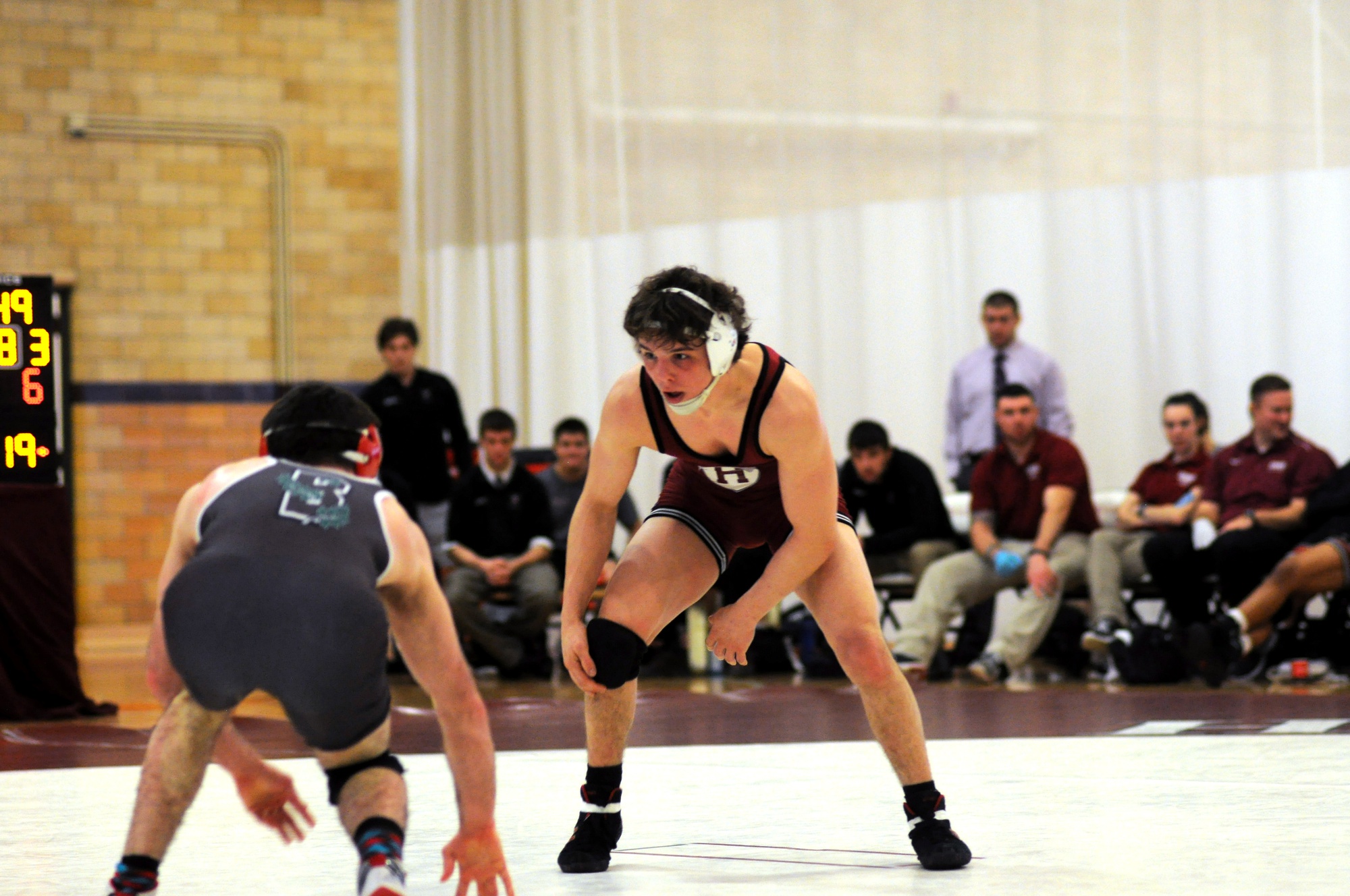 Junior Todd Preston, shown here in previous action, failed to advance past the round of 12 at the Cliff Keen Las Vegas Invitational.
By Jillian Dukes, Crimson Staff Writer

The Harvard wrestling team headed to Las Vegas, Nev. to take on some of the nation’s most elite competitors at the Cliff Keen Las Vegas Invitational. Last year, the Crimson fell jut short of reaching the podium, and the squad found itself in the exact same position when competition ended Saturday night.

“I don’t think we wrestled our best,” Harvard coach Jay Weiss said. “This is a big tournament for us. It’s marked on our schedules as something to gear up for during the first semester, and I was hoping for us to do better. But there were takeaways.... Ironically, a lot of them came from our losses.”

The Cliff Keen Invitational is a staple of the Harvard wrestling season, with this year representing the Crimson’s 19th appearance at the Las Vegas Convention Center. Harvard vied for a solid showing against 38 of collegiate wrestling’s toughest squads, with 12 of the programs ranking in the top 20 nationally.

“It’s a great atmosphere,” senior David Ng said. “Everyone is really excited to compete and really excited to showcase how good they are. It’s always great to go out and wrestle a top ten guy and have the opportunity to knock him off.”

Ng was a top contender for the Crimson this weekend, snagging one of Harvard’s two top twelve finishes. The heavyweight found himself facing the number one seed, NC State’s Nick Gwiazdowski, in his very first bout. After losing to Gwiazdowski, 11-2, Ng rebounded to claim his next three matches. The heavyweight’s streak ended with a defeat against Ohio State’s Nick Tavanello.

“David was right in there,” Weiss said. “He wrestled really tough and had the chance to wrestle the defending national champ, and that’s a great experience. He fell short of placing, which is unfortunate, but it was a great opportunity for him.”

For junior Todd Preston, his finish this weekend is identical to the performance he put on last year. For the second consecutive year, he fell to his opponent in the round of twelve, just missing a top six position.

“Todd just needs to wrestle to what he is capable of, because is a lot better than what he did this weekend, and he knows it,” Weiss said. “He needs to use this experience as a springboard to better himself. I know he’s going to do better in the future because of the way he didn’t wrestle this weekend.”

Preston, seeded eighth in the 141 weight class, found early success as he defeated his first two opponents. In his first match, Preston held Indiana’s Joseph Duca scoreless to take the bout, 1-0, and followed it up with a victory over Boise State’s Geo Martinez, 6-1.

After a third round loss by technical fall to the eventual weight class champion, Preston was unable to regain his footing and lost in the round of twelve to West Virginia’s Mike Morales, 6-3.

“It was a little disappointing for us both, just because we came so close to placing,” Ng said. “We both were focused, we were both excited, and were really hoping to make it into that top six.”

One of the Crimson’s most promising showings came from freshman Josef Johnson. After a win in his first match, the rookie faced off up with the Nebraska’s Robert Kokesh—the number two seed nationally in the 174 weight class—and suffered a 13-5 defeat.

“I think Joe really turned some heads this weekend,” Ng said. “He wrestled against the number two guy in the country, and he wasn’t giving up takedowns easily—he was actually getting takedowns of his own. He was being the tough, gritty wrestler that we all want to embody on the mat.”

Other wins on the tournament came from senior Ryan Osleeb and junior Josh Popple, each of whom went 1-2 on the weekend.

“We always want to wrestle at the level of our opponents, and that’s why we go to these tournaments,” Weiss said. “ The more competitive our opponents, the better we get. It’s great experience for us.”

—Staff writer Jillian Dukes can be reached at jdukes01@college.harvard.edu.