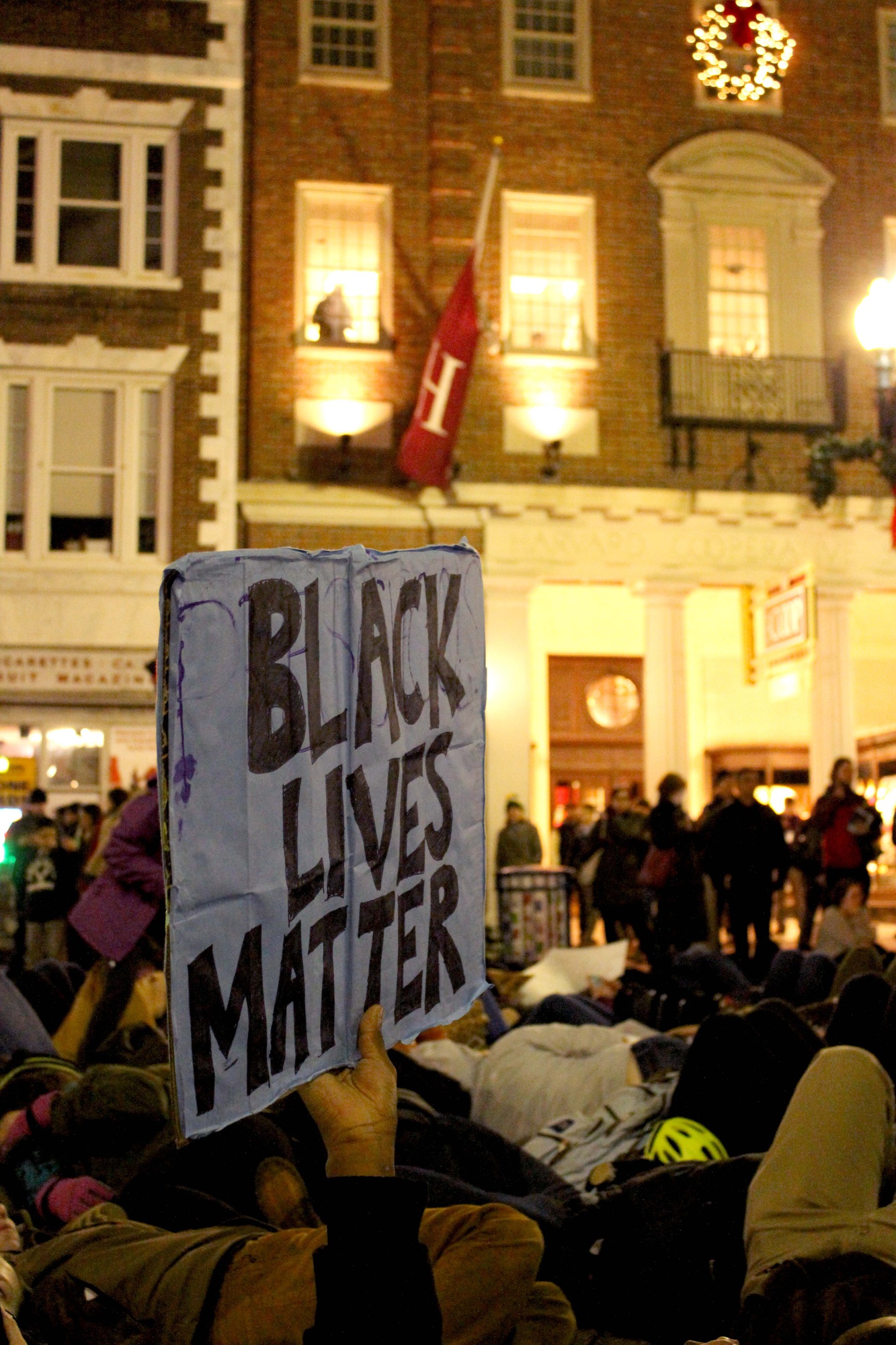 A protester holds up a sign that reads "Black Lives Matter" during a "die-in" in Harvard Square on Friday evening to protest the recent non-indictments of the officers in the Michael Brown and Eric Garner cases. Protesters began in Davis Square and continued to MIT, laying down at key transportation sites.
By Meg P. Bernhard, Crimson Staff Writer

An estimated 600 protesters streamed through Harvard Square Friday evening around 6 p.m. en route from Tufts University to MIT in what appeared to be the largest gathering yet in Cambridge in response to two recent decisions by grand juries not to indict white police officers who killed unarmed black men. 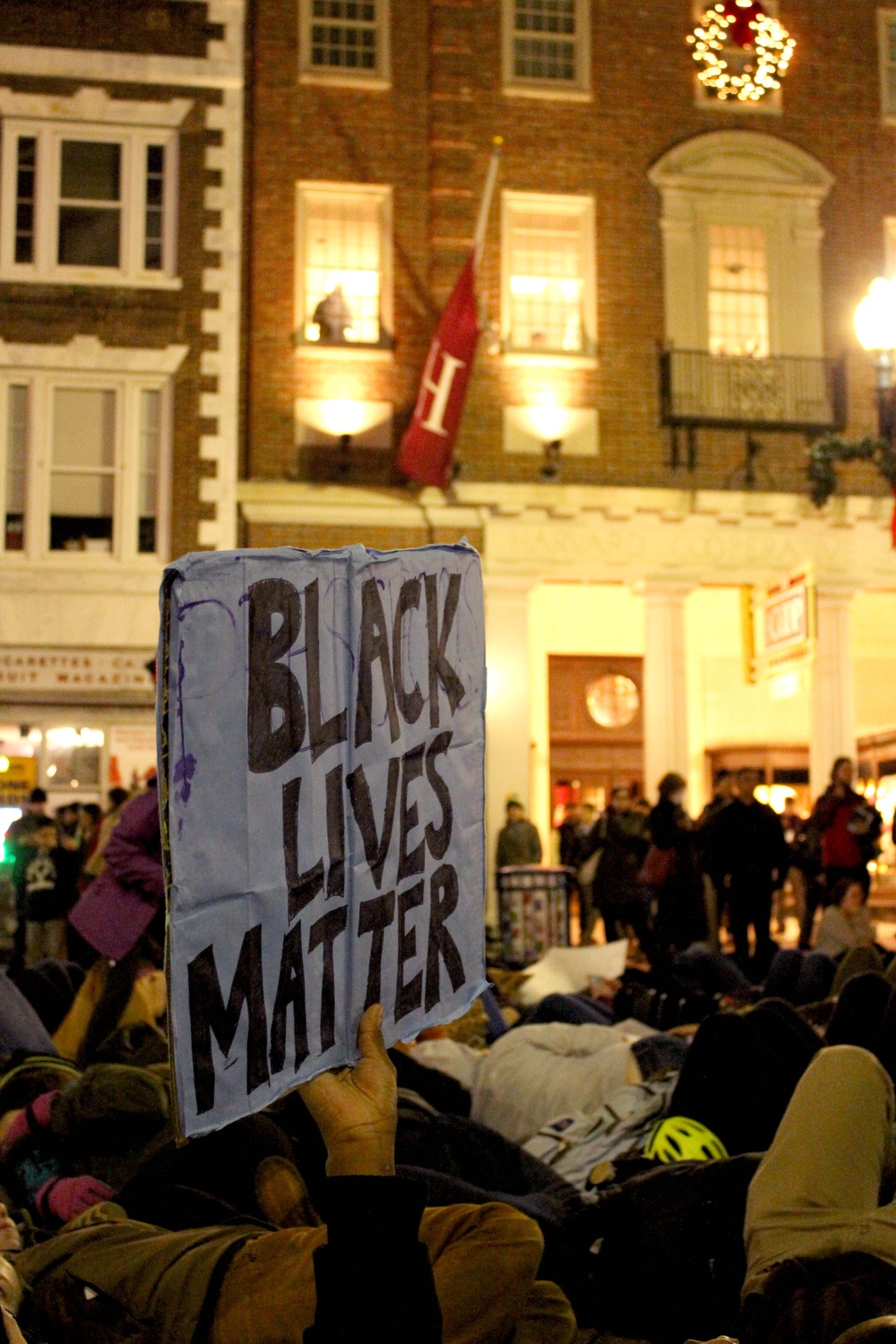 A protester holds up a sign that reads "Black Lives Matter" during a "die-in" in Harvard Square on Friday evening to protest the recent non-indictments of the officers in the Michael Brown and Eric Garner cases. Protesters began in Davis Square and continued to MIT, laying down at key transportation sites. By Thomas W. Franck

The events Friday followed a week of national and campus-wide protests regarding the two separate cases of Michael Brown of Ferguson, Mo. and Eric Garner of Staten Island, N. Y., the unarmed black men who died during police altercations. Harvard affiliates also staged a “die-in” Dec. 7 on the steps of Memorial Church to protest “state-sanctioned lethal force against unarmed citizens.”

After passing through Davis Square Friday, the marching protesters rallied in front of the Harvard Coop before continuing down JFK Street and turning east on Mt. Auburn Avenue toward MIT, temporarily diverting traffic. The protest attracted local police departments, including those of Somerville and Cambridge, and at least four helicopters circling overhead. The police also temporarily shut down the main Harvard Square MBTA entrance.

The protesters were stopped by a police line at Mass. Ave. Bridge on the Cambridge side near MIT, according to State Police spokesman David Procopio, as reported in the Boston Globe.

Harvard students who participated in the march said they felt compelled to raise awareness from their vantage point as University members.

“The more people who join, the more attention it gets and the more people are aware of the problem,” said Yasmin A. Rawlins ’15, who joined the march at Harvard Square. “Even adding one voice to the chorus of voices helps. The more voices there are, the louder it gets.”

Jennifer L. Ruiz ’16 said she marched because she thought that issue warranted more attention from Harvard.

“I feel like Harvard's campus has been very oblivious to what's been going on in America, and I feel like this march did not disrupt, but it definitely bought people’s awareness, coming through these universities,” Ruiz said.

Earlier Friday afternoon around 3:30 p.m., Harvard affiliates wore hospital masks that read, “We can’t breathe” in front of the John Harvard statue at University Hall. They chanted the phrase 11 times to signify Garner’s repeated use of the phrase while being choked by a police officer intending to arrest him on an illegal sale of cigarettes charge. The protesters also held a 4.5 minute die-in to represent the 4.5 hours Brown’s body lay in the street before being taken to the morgue. 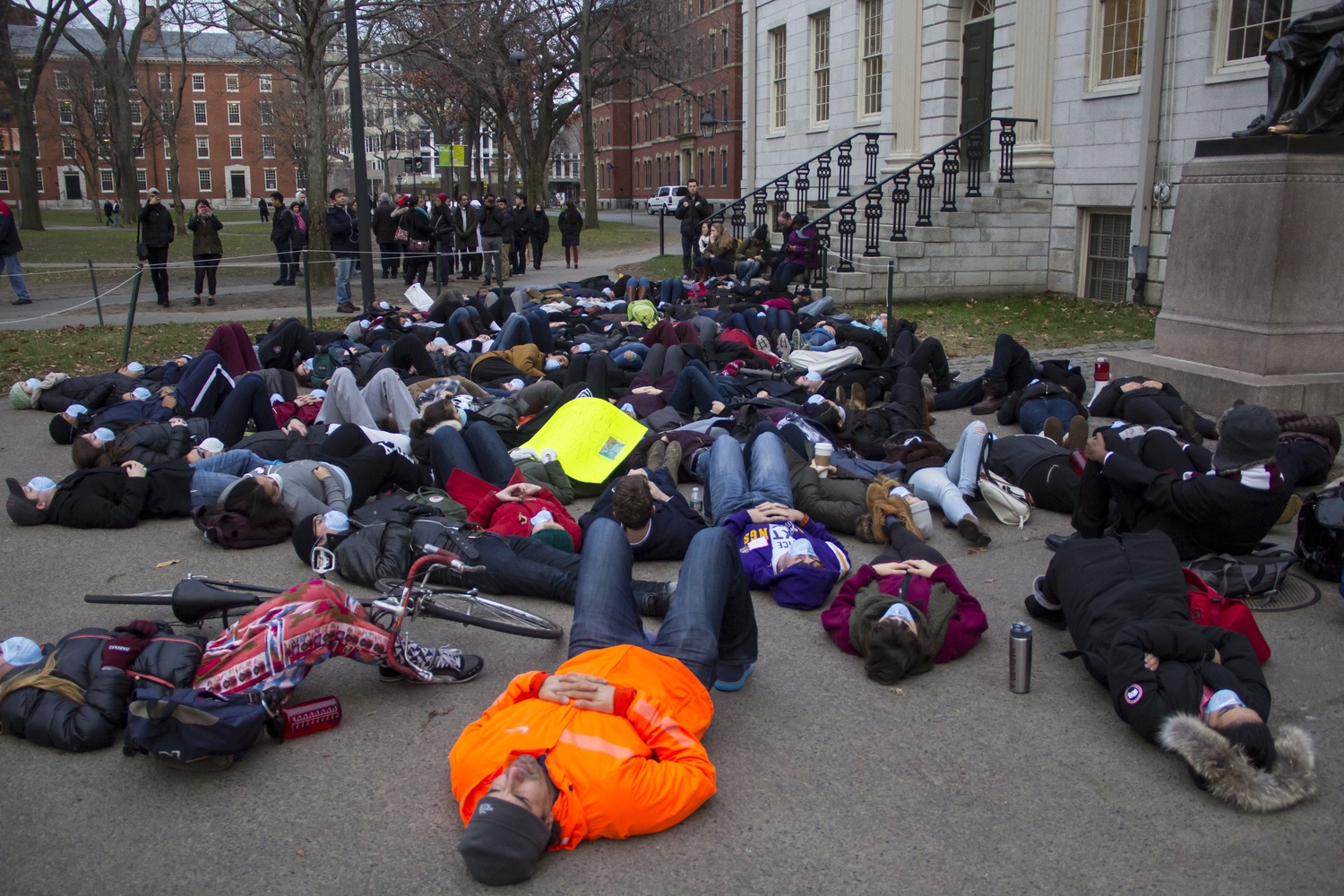 The four freshmen who planned the event spent the hours prior passing out hospital masks they obtained from Harvard University Health Services.

Samuel H. Koppelman ’18, another protest organizer who is currently comping The Crimson, addressed the crowd after Rush.

“If one of us can’t breathe, none of us should be able to breathe,” Koppelman said. “While I can breathe, and while almost all white Americans can breathe in a way that's different than those of color in America, it’s a time like this when everything is so palpable and omnipresent that we need to come together.”