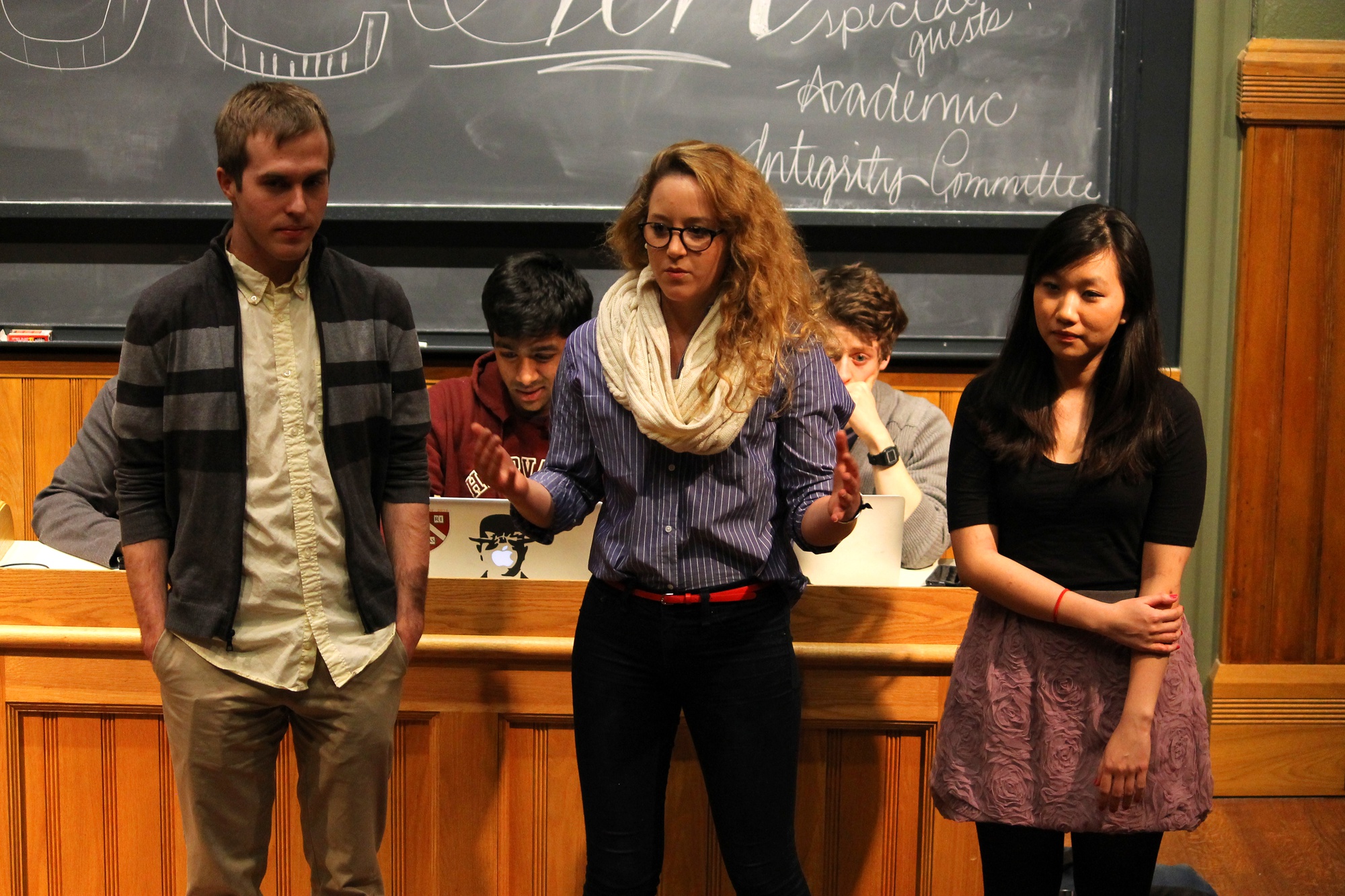 Representatives from the Undergraduate Council voted in favor of a revised version of the honor code at the group’s weekly meeting Sunday night, despite concerns that the Council’s legislation failed to address lingering questions about the formation of an honor board.

At the meeting, students from the Academic Integrity Committee—accompanied by incoming Dean of the College Rakesh Khurana, Assistant Dean of the College and Associate Secretary of the Administrative Board Brett Flehinger, and Associate Director of the Program in General Education Anne Marie E. Calareso—presented a revised draft of the honor code and answered questions from UC representatives.

The draft introduced to the Council contained slightly different wording from the previous version released in early January and lacked a paragraph regarding the formation of an honor board. Flehinger said such a board would logically be created after the honor code is finalized. 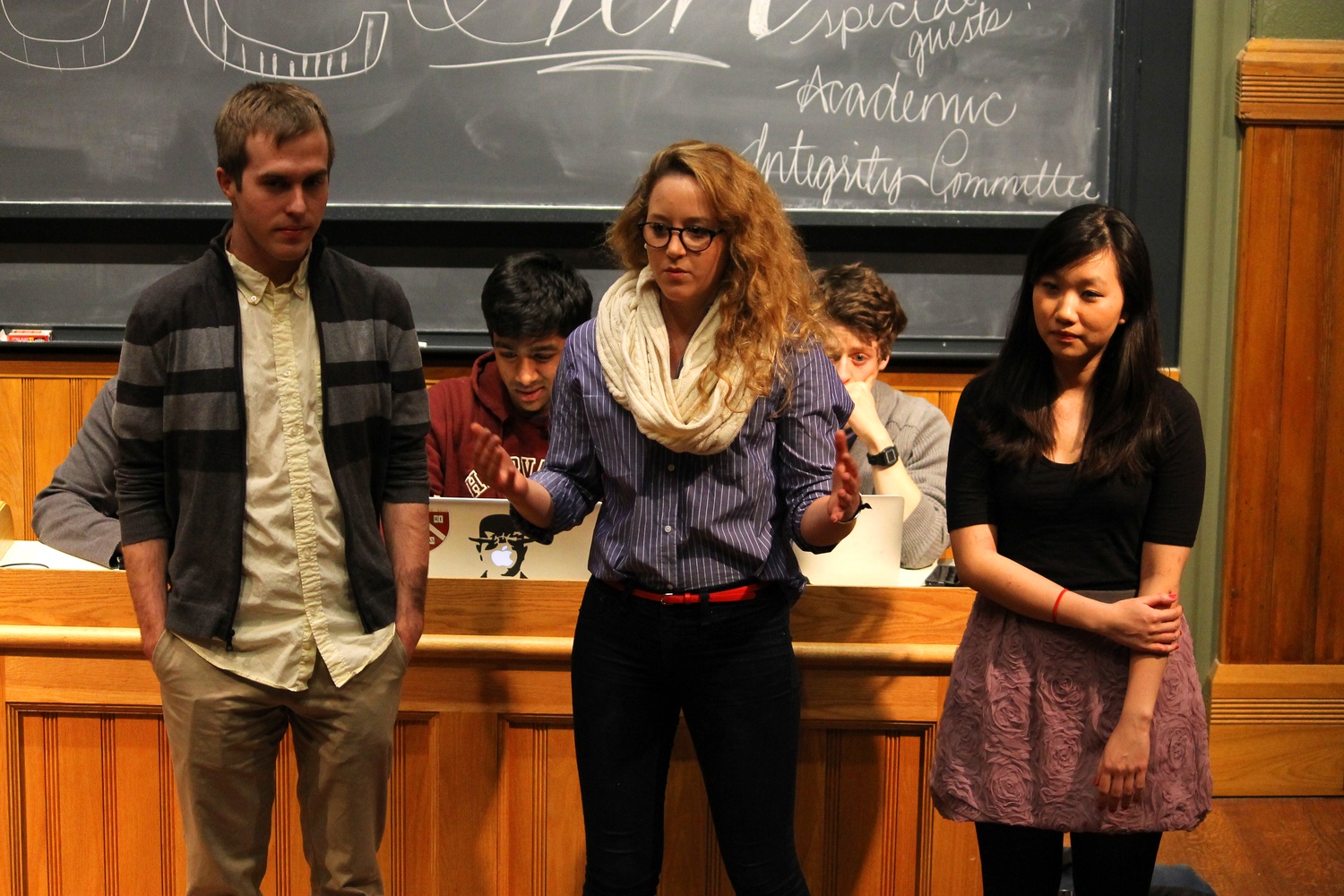 Student members of the Academic Integrity Committee present their ideas and outline of the honor code draft at the UC's weekly meeting Sunday night. By Jennifer Y Yao

Still, members of the UC debated whether the draft alone was sufficient to justify a final vote on the measure. Because the proposal must ultimately pass by the Faculty Council, the highest elected body of the Faculty of Arts and Sciences, the code could undergo significant structural changes by the time the final draft is approved.

While several UC representatives expressed support of the proposal, Brett M. Biebelberg ’16, a representative from Quincy House, cautioned against what could be seen as the UC writing “a blank check” by endorsing the measure without fully knowing what the honor board would entail or whether further stipulations would be added to the code.

Biebelberg, who was the only member of the UC who voted against the measure, said after the meeting that, although he is pleased with the progress the honor code has made, he did not think it was appropriate for the UC to officially endorse the proposal until it was able to review all the final details.

Terah E. Lyons ’14, a member of the Academic Integrity Committee, responded to concerns about the details of the legislation by describing the proposal as a “symbolic gesture” of reaching out for student input.

“[A favorable vote by the Council] would just be a gesture...that you are approving it to go forward in sort of the right direction,” she said.

After members of the Council were dismissed from the meeting, UC President Gus A. Mayopoulos ’15 said he supported the Council’s decision to adopt the version of the honor code brought before them and shared his view of the significance of the vote.

“I think it’s important to remember that we are approving the process of creating an honor code, not any specific honor code at this point,” Mayopoulos said.

Stemming from a referendum that passed in November’s election, the UPASS Referendum Act, which would work to create a partnership between Harvard and the MBTA so that students could receive discounted transportation passes, passed with overwhelming support despite uncertainty about funding the proposal.

The UC also agreed to divert an additional $5,000 to the Freshman Life Fund and to allocate up to $300 from Student Initiative Committee funds for Valentine’s Day grants.

—Staff writer Noah Delwiche can be reached at ndelwiche@college.harvard.edu.