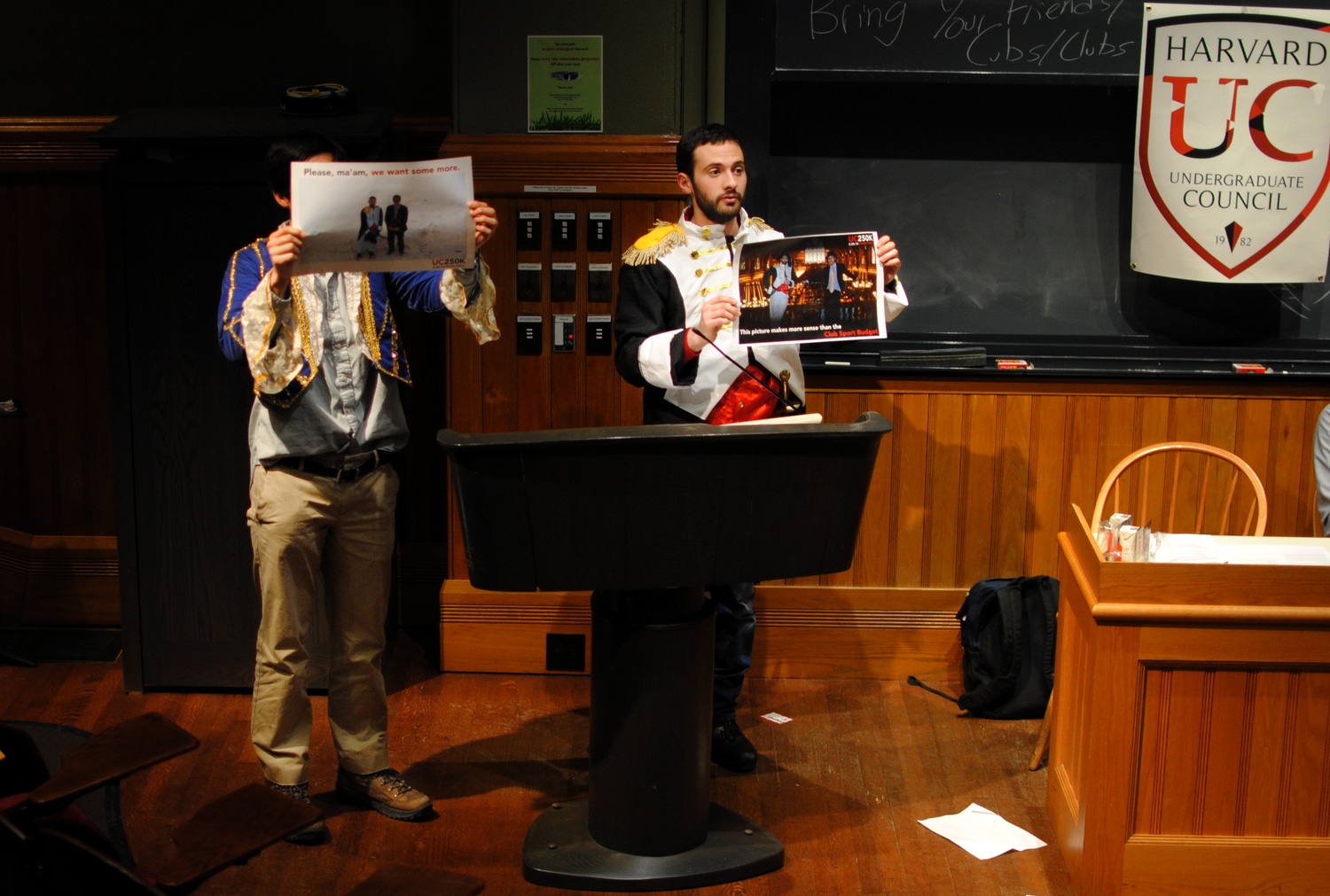 In advance of their meeting with University President Drew G. Faust Thursday, leaders of the Undergraduate Council on Sunday outlined fundraising models and broke down the ways in which the would spend the additional $250,000 the organization is seeking from the University.

All three proposals that Mayopoulos and Goffard will present to Faust involve a term bill increase, they wrote.

A second method, which leaders dubbed the “sliding scales of justice” option, would raise the fee to $150, but students on financial aid would only pay a percentage of the total fee equal to the proportion of total tuition bill they pay.

The final option would peg the student activities charge to a percentage of the overall tuition, rather than increasing the fee by a specified amount, allowing for incremental scaled increases with inflation. According to the Council’s statement, that figure would ideally be .37 percent.

Harvard students currently pay $75 per academic year in the form of the student services fee that funds the Council and supports the grants it gives to student groups on campus.

As the number of student organizations has increased by 35 percent in the last 9 academic years, the UC leaders said that that fee, applied to each student’s term bill, has remained fixed.

“We are falling behind,” they wrote in the press release, noting that the average student activities fee at peer institutions is $169.

If they receive permission for the funding increase, the leaders said that the body would distribute 65 percent of the new funds to student groups and club sports. Fifteen percent of the funds would be set aside for House Committees and the Freshman Class Committee.

The remaining 20 percent would fund a broad variety of UC committee initiatives that subsidize events for students. Feedback from student surveys administered as part of Operation Ghost Protocol, the body’s new student outreach effort, would also play a part in the direction of this portion of the funds.

In a separate interview Sunday evening, Mayopoulos said that although he would prefer that additional UC funding come directly from the University, the prospects are historically low.

“We are trying to be as realistic as possible,” Mayopoulos said. “The only way the UC has ever been able to fund student co-curricular activities has been through the term bill.”

To that end, Mayopoulos said that the UC does not expect an immediate financial resolution from Thursday afternoon’s meeting.

“We are aware that we will not walk out of President Faust’s office with a check for a quarter of a million dollars,” Mayopoulos said, though he added, “I don’t think it is symbolic. I think that we genuinely do want to see that President Faust understands how important co-curricular activities are for undergrads and that she supports an increase in funding for those.”

After the meeting with Faust, Mayopoulos said that more talks with other Harvard officials such as Dean of the Faculty of Arts and Sciences Michael D. Smith will be planned.

Mayopoulos said that the UC hopes it can receive an increase in funding for the next academic year.

Mayopoulos stressed the importance of student input in the process of acquiring the funding. In their press release, UC leaders requested that any student who participates in a campus organization gather near Massachusetts Hall at 4 p.m. Thursday in anticipation of their meeting with Faust. As an incentive, UC leaders said thicker toilet paper will be distributed to those present.

“I don’t think the UC can do this by itself, but the UC shouldn’t do it by itself—it should do it with the students backing it,” he said.