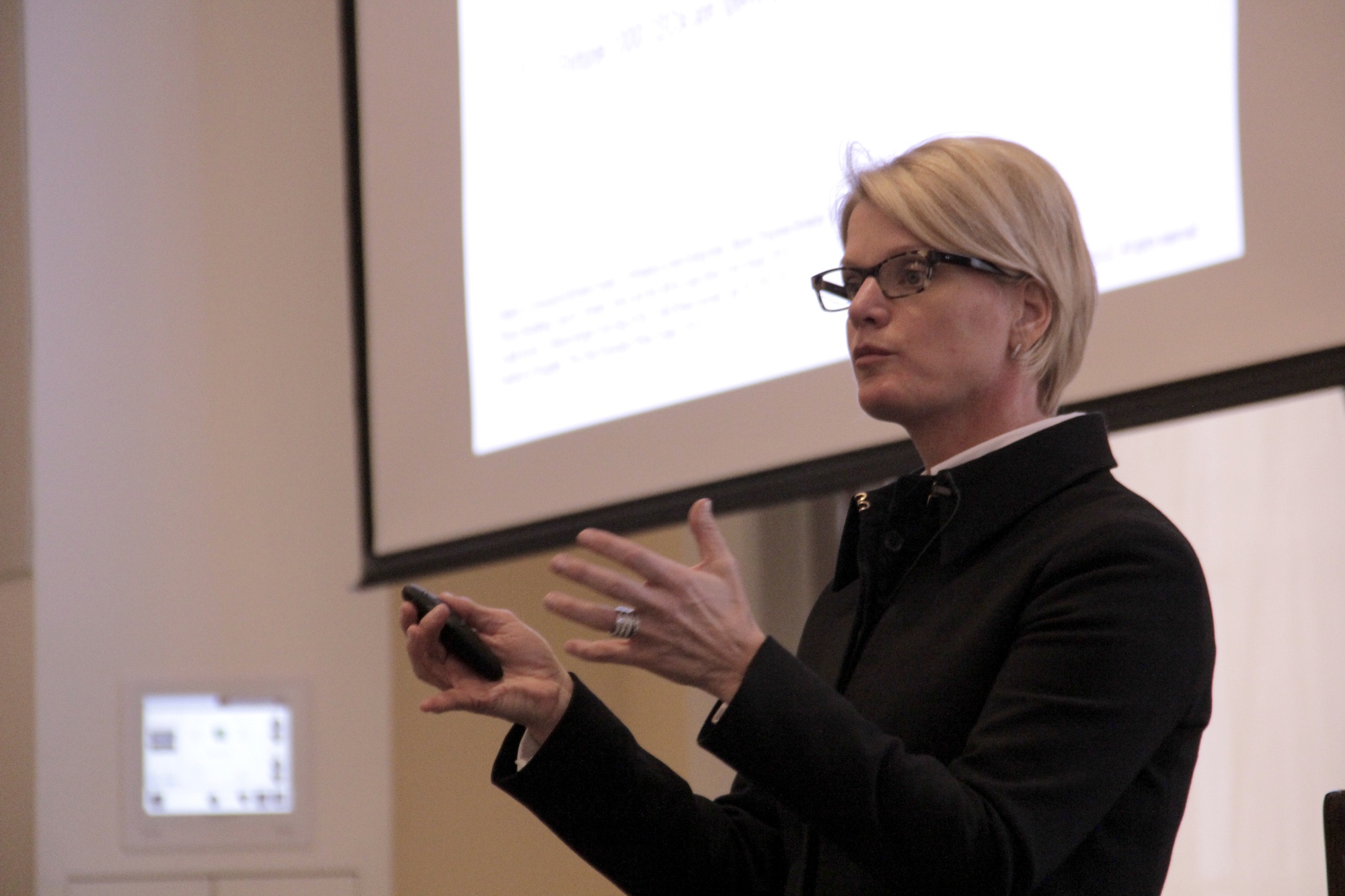 Consultant and LGBTQ advocate Christie Smith discusses "covering," a behavior she says is characteristic of minorities on Sunday afternoon at Harvard Business School. This talk was part of the annual LGBTQ Conference at Harvard University that took place over the weekend.
By Quynh-Nhu Le, Crimson Staff Writer 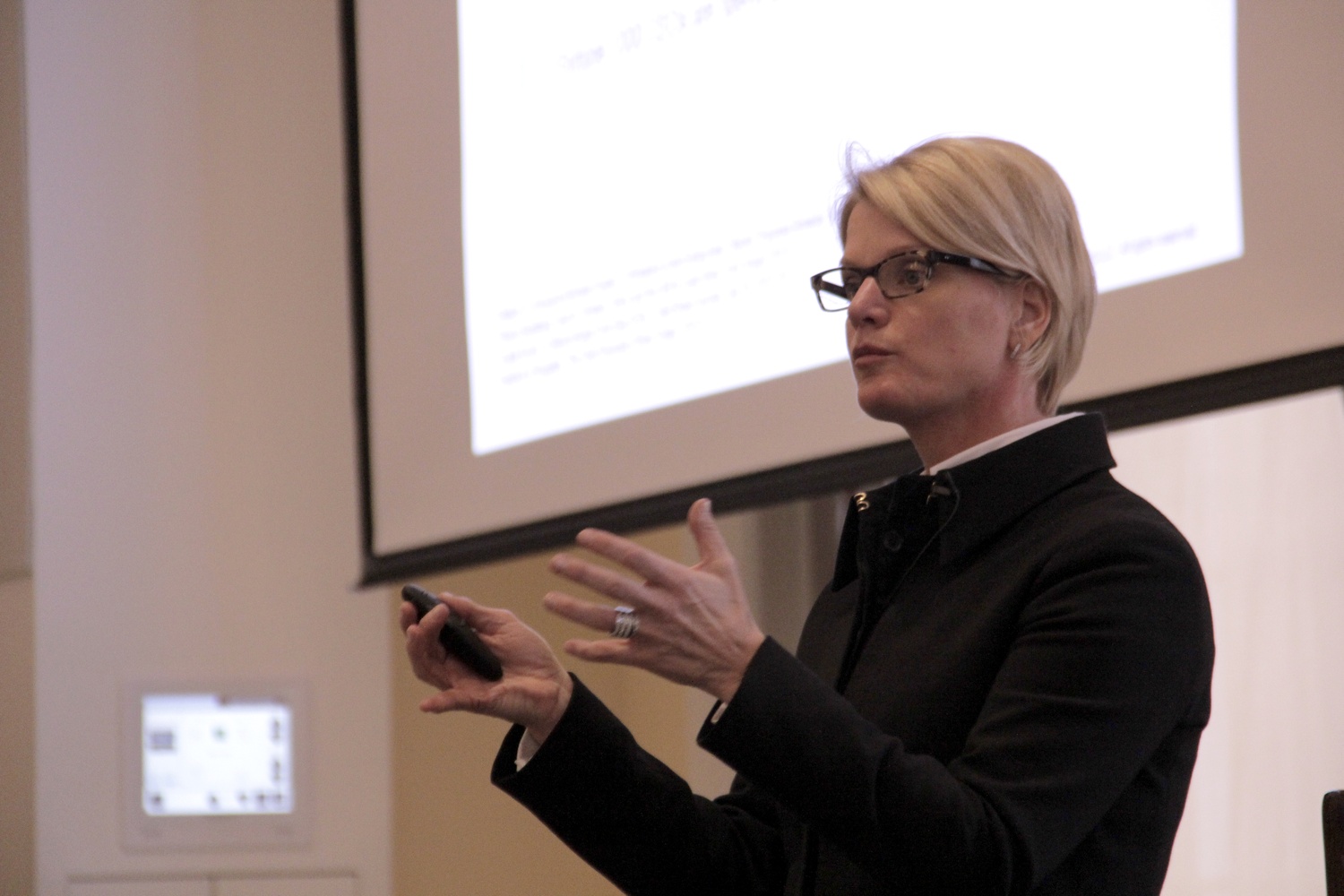 Consultant and LGBTQ advocate Christie Smith discusses "covering," a behavior she says is characteristic of minorities on Sunday afternoon at Harvard Business School. This talk was part of the annual LGBTQ Conference at Harvard University that took place over the weekend. By Madeline R. Lear

More than 450 participants from more than 35 universities around the world gathered to discuss a variety of LGBTQ issues at a conference this weekend organized by students from Harvard’s graduate schools.

Hosted at the Law School and the Business School, the two-day conference aimed to encourage discussion and action on past successes and current issues in the queer community through a series of speakers, panels, and interactive sessions.

Binbin Chen, a participant at the conference and a student at Stanford Medical School, highly praised the weekend's events.

“It’s Harvard, so the quality of the speakers were unheard of for me, and each module tackled very pressing issues,” he said.

Attendees listened to discourse about a number of varied subjects, including LGBTQ athletes, the military, inclusiveness in the workplace, and support for queer issues in the Republican Party. Speakers included Kristen Beck, a former Navy SEAL and a trans woman, Caitlin Cahow ’08, a queer women’s hockey player on the U.S. national team, and Gautam Raghavan, LGBTQ liaison to the White House.

AJ Lee, one of the co-chairs of the conference and a student at the Kennedy School ofGovernment, remarked that the organizers made special effort to represent the diversity of the community in both the topics discussed and selection of speakers.

“[The queer community is] a very broad community with a lot of stakeholders,” Lee said. “So, when thinking of topics and speakers, we wanted to cover as much as we could. We wanted to pay particular attention to communities that are more marginalized or less visible in the larger LBGTQ community.”

He added that the conference further set itself apart by approaching these issues in an interdisciplinary manner and by encouraging reflection and action from attendees through “‘ideation’ sessions.” In these sessions, attendees shared experiences and worked on plans of actions related to a specific topic they had selected, such as bullying or trans inclusivity.

“They really educated us to deal with certain people in the community, to go out there and be part of it,” said Gardette Hutton, an attendee from Columbia University. “The whole conference itself was very educational and very inspirational.”

Although overall he gave the conference a “thumbs up,” Kapena J. Baptista ’16, who did not attend the conference but followed its formation, said that he would like to see an even broader range of topics examined in future conferences. “There are other issues, and there should be equal attention given to these topics.”

Baptista serves as co-chair of Harvard College GLOW, a group for queer students of color. He was also one of the most vocal of those who protested on Facebook when conference organizers announced Daniel K. “Dan” Savage, a well-known sex columnist and writer on queer issues, would be a speaker at the conference. Savage, who Baptista and others argued has made transphobic and biphobic comments in the past, later canceled his appearance due to scheduling conflicts.

Organizers said that they plan to continue the conference and noted the possibility of increasing the number of schools involved.

“We’re meeting next week to turn inaugural into annual,” said Ana I. Mendy ’09, a conference co-chair and a student at the Business School.