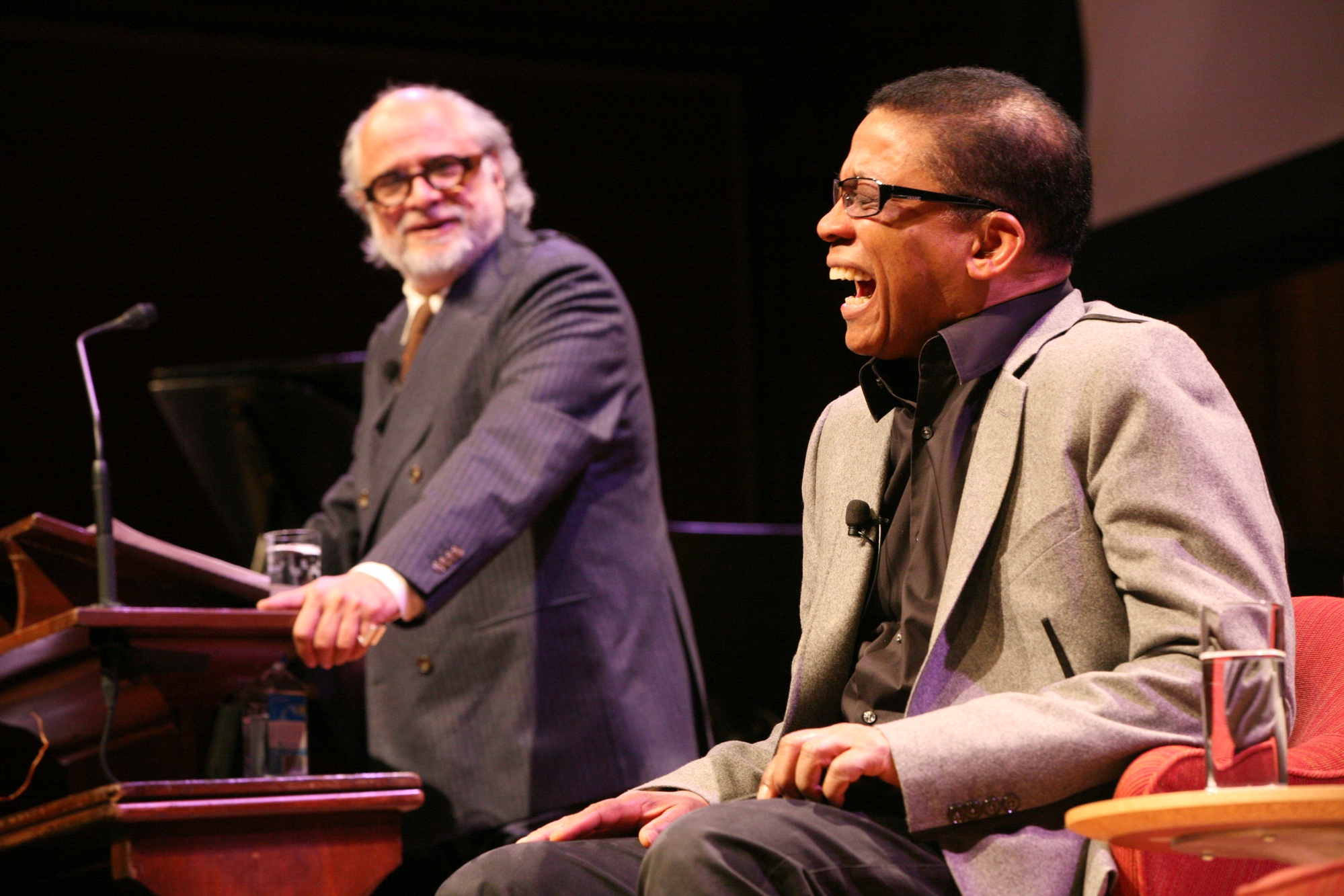 The 2014 Norton Lecturer, Herbie Hancock, bursts into laughter during the first set of his lecture series, ‘The Ethics of Jazz’ in Sanders Theatre on Feb 3.
By Ivan B. K. Levingston, Crimson Staff Writer 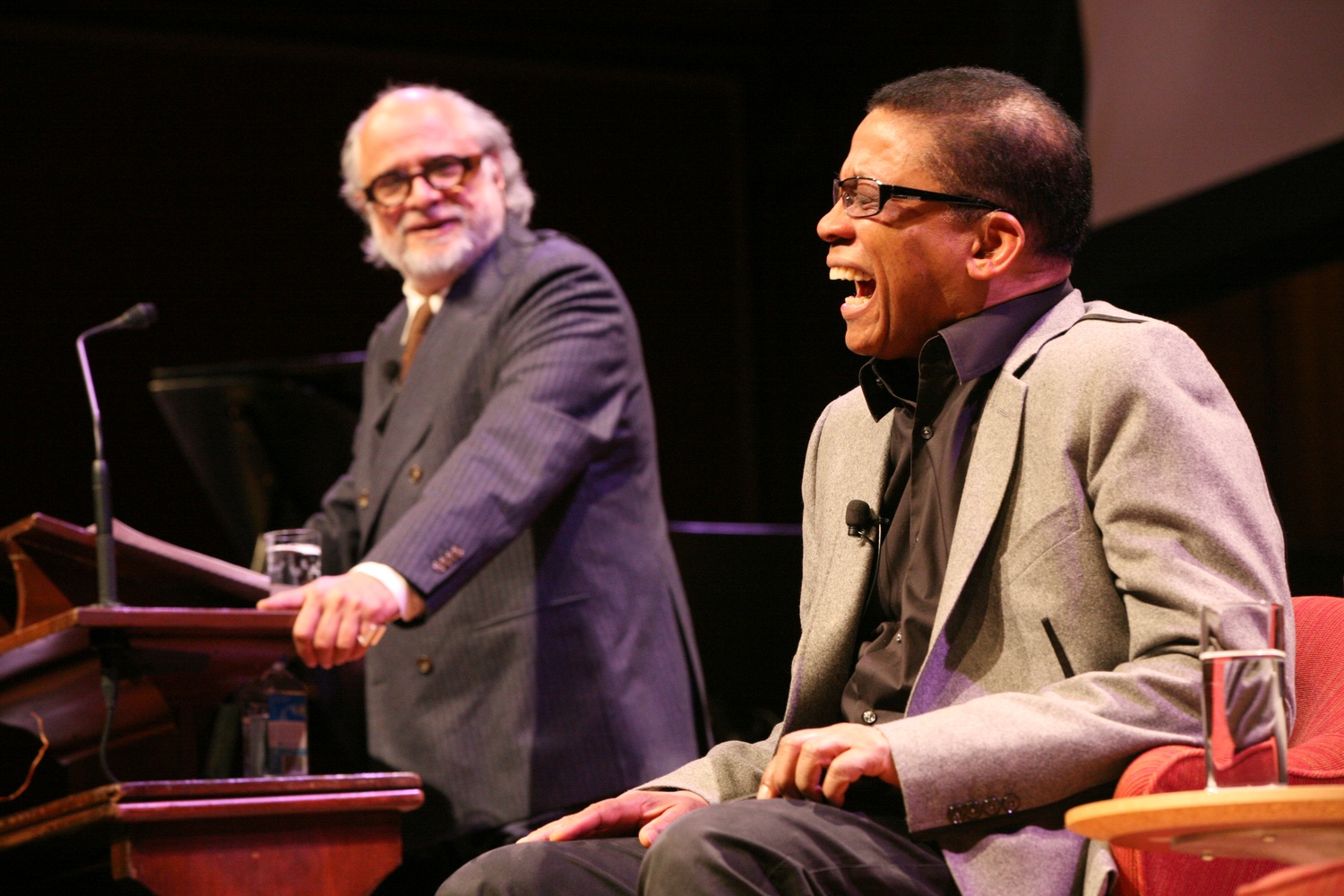 The 2014 Norton Lecturer, Herbie Hancock, bursts into laughter during the first set of his lecture series, ‘The Ethics of Jazz’ in Sanders Theatre on Feb 3. By Courtesy of Tia Chapman

Although Herbert “Herbie” J. Hancock is a world-renowned Jazz pianist and composer, he once struggled with his future as a student at Grinnell College. Stuck between his passion for music and the practical skills of a degree in electrical engineering, Hancock ultimately chose music and has not looked back since.

Hancock delved into these personal experiences, as well as the core values of jazz music during a lecture in Sanders Theatre on Monday.

Hancock, the 2014 Charles Eliot Norton Professor of Poetry, the first African-American to hold the prestigious position, gave the first in a series of six lectures entitled “The Ethics of Jazz,” presented by the Mahindra Humanities Center.

The first lecture, entitled, “The Wisdom of Miles Davis” tied Hancock’s personal memories of the legendary trumpet player and bandleader to broader lessons about racism, ethics, and Buddhism.

During the lecture, which included some piano playing, Hancock touched on both the serious and lighter aspects of Davis’s life.

“He loved fast cars, boxing, fast women, and, oh yeah, music,” Hancock said of Davis. “He was a man of few words, but he knew how to listen.”

During one memorable concert while Hancock was playing with the legendary Miles Davis Quintet, the group was on a roll, Hancock remembered. However, right in the middle of Davis’s solo, Hancock played a wrong chord.

The chord sounded off, but Davis’s next notes made the mistake sound like part of the flow of the song, Hancock recalled.

“This experience became groundbreaking for me and opened the door to the future of my performances,” Hancock said.

Not only did Hancock draw values of courage and trust from the moment, but he also took away the Buddhist lesson that notes are neither right nor wrong.

Hancock enumerated other similarities he has found between Buddhism and jazz throughout the event.

“In jazz we don’t hide our discoveries from others,” Hancock said.

In one instance, Hancock was called to a practice session at Davis’ New York home, when Davis left the practice room and went upstairs for a while.

“Miles actually listened to us through the intercom in the bedroom...he wanted to hear us play unencumbered,” Hancock recounted.

However, the night was also filled with lighter stories, as Hancock mixed life lessons with anecdotes.

From the time that Hancock beat Miles Davis in a car race on the streets of New York at 4 a.m., to when a manager yelled, “You’re gonna regret this,” after Hancock quit his job at a post office so that he could play a local jazz gig.

“One thing I’ve learned is to always be a student,” Hancock said. “Don’t be too quick to say no.”

“It’s absolutely historic that Herbie Hancock is doing these lectures,” Monson said. “I couldn’t be happier, I think it’s really nice to be able to do a course and do it in conjunction with the many wonderful guests we have on campus.”

Bjorn Kuhnicke, a student at the Graduate School of Arts and Sciences who attended the lecture, said he enjoyed Hancock’s style.

“It was an interesting way of preaching, I liked it.”